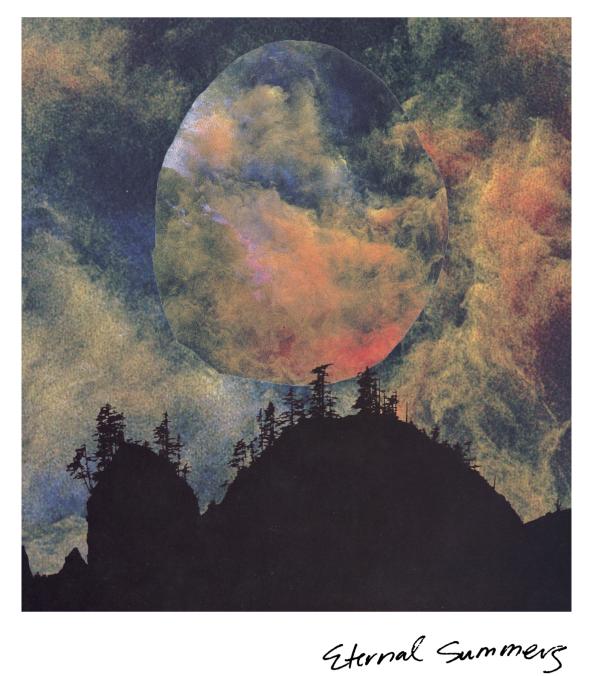 Imagine you’re in warmer climes with the glistening dream pop of Eternal Summers. The Virgina-based duo turned trio—singer/guitarist Nicole Yun, drummer Daniel Cundiff and bassist Jonathan Woods—recorded their latest full-length The Drop Beneath at Resonate Studios in Austin, TX. Songs like “Gouge” and “Deep End” are reminiscent of The Cure, and others recall the ethereal sounds of Blonde Redhead. Produced and engineered by members of Guided by Voices and Nada Surf, The Drop Beneath is set for release on Tuesday, March 4th, when Eternal Summers has its record release party at Baby’s All Right in Brooklyn. The indie band also plays the SXSW Festival later in the month.

Pulse: How do you describe the sound on your latest LP, The Drop Beneath? How has it evolved from your last two recordings?
Daniel Cundiff: I would describe the sound on the new album as being more realized. We’re always about moving forward in our playing and our song writing. We want to surprise people not repeat ourselves… As we have changed and evolved as people, so have the sounds we create. It’s the first time we worked with a producer, Doug Gillard, and the first time we left our hometown to record. By that process we were able to focus more and fine tune the songs. We wanted to expand on what we had done on prior recordings and to create interesting, pretty, heavy, sonic songs. We also wanted to push ourselves outside of our comfort zone and see what that process would yield. It yielded more diverse songs and arrangements than what we had done in the past. The Drop Beneath is a journey in the form of an album in the classic sense.

P: What can we expect to hear at your cd release party at Baby’s All Right? Mostly songs from The Drop Beneath?
DC: Yeah, we’ll be playing lots from our newest release and a few old ‘hits’. We may even play a few brand new jammers. A few guests may appear on stage as well but I can’t comment on that officially as of now. You can expect us to rock out!

P: Do you play any covers live? If so, which ones?
DC: We have covered Guided By Voices, Foo Fighters, Neil Young, The Beatles, Big Star, Galaxie 500, The Lemonheads and David Bowie. We haven’t done many covers recently, though. We need to get on that. I like a good cover.

P: Have you played on Long Island before? What do you like about playing in NYC?
DC: Yeah, we played in Montauk at the Surf Lodge. It was a weird and fun time. We played a super long set… We like to play NYC because it’s always different. The crowds are good. Sorry, I’m getting kicked out of this coffee house so I have to go. Cheers! See you at Baby’s!!!