Some people leave their work at the office. Not Sharon Matt Atkins, the managing curator of exhibitions at the Brooklyn Museum. She’s pretty much looking at, reading, writing and thinking about art wherever she goes.

Dr. Atkins has worked in museums since her freshman year at Iowa State University and sees art as a great way to “spark conversations about…things that tie us together as communities and as a culture.” Much of her life is bound to art. “I’m the youngest of six children,” she said. “I have two sisters who are artists…a brother who’s an architect… and a sister in textiles.” If that’s not enough, her husband Christopher is an art historian and a curator at the Philadelphia Museum of Art. “We’ve often joked about needing another hobby,” she admitted with a laugh. But few hobbies include flying halfway around the world to convince a political dissident to show his artwork to New York.

Atkins’ work involves visiting artists’ studios, from Bushwick to Beijing, to select work to present, planning exhibitions and working on educational programs. She also oversees the Brooklyn Museum’s own touring exhibitions, loaning treasures like Egyptian animal mummies, early American quilts and Edward Hopper paintings to museums all over the US. Recently, her work took her to China to coordinate the largest Ai Weiwei exhibition in the US to date. This month the Brooklyn Museum presents According to What?, a sprawling, often stunning show by the Chinese artist and activist. Ai Weiwei has been called iconoclast, dissident, provocateur, conceptualist and the most famous living artist. Widely recognized for his “bird’s nest” design for the Beijing Olympic stadium, he holds the unique potential to be both China’s most beloved export and its most outspoken critic. 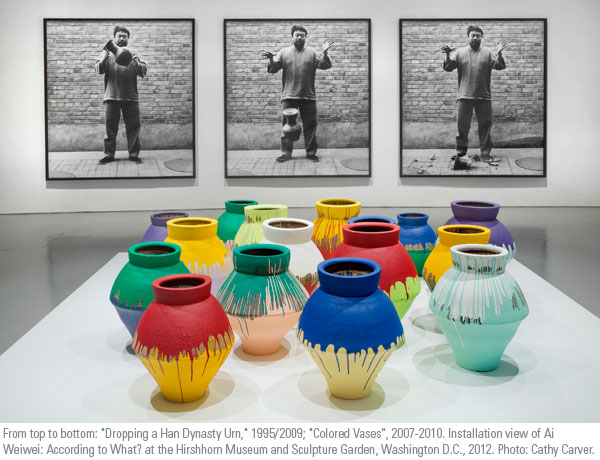 Yet even with an artist of Ai’s stature and a museum anxious to host his work, the current exhibition wouldn’t have happened if not for Atkins’ passion and dedication. Originally organized by the Mori Museum in Tokyo in 2009, Ai’s exhibition appeared as if it would not be slated for the Brooklyn Museum despite Atkins’ efforts. “At first it didn’t look like it was going to be possible because they already had a couple of museums lined up,” recalled Atkins. But she persisted.

“I was in Tokyo in 2012…and met with the curator.” She lobbied again to add a stop in New York for the show. Then she went to the source.

“From there, I went to Beijing to visit Ai’s studio and meet him.” Atkins went 7,000 miles—flying from New York to Tokyo and then Beijing— landed the exhibition and brought it home to Brooklyn. She also saw his recent work and convinced the artist to include some of his most powerful pieces, increasing the total number of works in the show from about 30 to 46.

Some of Ai’s best-known pieces will be on view. Straight is an installation of 38 tons of steel rebar from the rubble of schools that collapsed during the 2008 earthquake. Once twisted and broken, he painstakingly straightened them. The work is his commentary on efforts to erase traces of the tragedy. “You quite literally…feel the weight when you think about the lives that were lost, particularly the children…largely because of the issues of construction,” Atkins said. “It’s like goose bumps…anticipating just how powerful that installation is going to be.”

After producing works like Straight, Ai was detained and imprisoned by the Chinese government for 81 days in 2011. He was released, but his passport was taken away. Although Ai lived and created art in New York for a decade, some of it in Brooklyn, he won’t be able to attend his most important exhibition here. The artist’s limited freedom makes the show even more poignant. But that relates directly to what Atkins does. Bringing together the community and artists, “using their art as their way to communicate and inspire change, is why I do what I do,” she said.

April 18–August 10
The first major exhibition of Ai Weiwei’s work in the US. Forty-six monumental works fill over 13,000 square feet of gallery space in the Brooklyn Museum, the largest and final showing of this traveling exhibition.