Who is Cass Dillon and why should you care about him? The multitalented 27-year-old Rockville Centre native may just be on the verge of stepping into the national spotlight as a singer-songwriter and as an actor in both plays and films. An excellent tunesmith in the folk/indie vein, Dillon is blessed with the ability to combine soulful lyrics and catchy melodies with a voice that commands attention. (Think early Jackson Browne.) His first “serious” song, which he wrote at age 17, garnered industry attention and earned the fledgling artist a publishing deal. In a whirlwind of momentum Dillon, barely out of his teens, was hand-picked by Billy Joel to sing Joel’s ode to the troops, “Christmas in Fallujah.” The future was looking exceedingly bright. Then, despite having a management deal, Dillon spent the next several years in a state of virtual dormancy, becoming thoroughly disillusioned with the business. 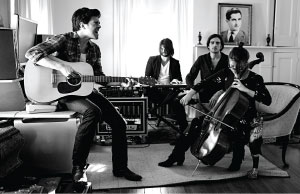 Still, those years served as a springboard of creative and spiritual rejuvenation. New original songs “Big Dreams,” “Friends” and “I Love You” showcase Dillon as a solo artist who possesses all the requisites for major success. Stretching his musical wings, Dillon is also a member of The Dirty Apostles, a progressive hip-hop group fronted by wordsmith Daniel Nicotra and accompanied by drummer Jeff Fabb and cellist Valerie Kuehne. Describing the process of creating progressive hip-hop, Dillon explained, “We sit in a room, I’ll play bass or something, we’ll come up with grooves, Daniel will start rapping and we’ll record a very raw idea. Then I’ll take it back and produce on top of it; I’ll play a lot of live instruments, dubbing things, sampling things. I think it’s kind of like this new way of creating hip-hop; that’s the only way that I know how to do it. I’m not the guy with turntables, mixing and scratching. It happened very organically and it’s been this really cool, creative process.”

Dillon recently appeared as an actor in the Anne Hathaway film, Song One, which was featured at the Sundance Film Festival. He has just begun filming Ten Thousand Saints with Ethan Hawke, slated for 2015 release. And he is gearing up to take the stage off-Broadway in a leading role in Folk City, a musical journey based on the books Bringing It All Back Home and Hoot! by Long Island’s Robbie Woliver. The play centers on the intoxicating world of music, alcohol and sex that lured America’s youth to 1960s Greenwich Village, looking at what it meant to be a part of the legendary Gerde’s Folk City—the nightclub that fostered the careers of many folk singers in the 1960s.

Dillon described his foray into acting with a laugh and a shake of the head. “I got into acting accidentally,” he said. “I was producing this track for this girl who’s a singer-songwriter and she said, ‘I have to leave early today, I have to go to this acting class.’ Then she invited me to check it out… Ultimately, I just really fell in love with the art form, being on stage and understanding the breakdown of characters and great literature… I feel so blessed to play this role. The character is almost like an extreme version of me.”

Woliver agrees with Dillon about the similarities between the young actor and his character. “Hundreds of talented people auditioned for the part Cass eventually got, but the second he walked in we knew we had found someone special. He’s the epitome of star quality,” Woliver said. “One of the Folk City musical themes is about discovering the ‘next big thing’—and Cass fits that bill.”