For David Crosby, life is especially sweet. Survivor of a lifestyle that nearly killed him dozens of times over, the two-time inductee into the Rock and Roll Hall of Fame (The Byrds in 1991; Crosby, Stills & Nash in 1997) has recently released Croz, his first solo album in more than 20 years. Containing 11 new songs, its title is a wry reminder of Crosby’s long and winding return to consciousness in the years after his brilliant 1971 solo debut, If I Could Only Remember My Name.

Recorded with his son James Raymond (keyboards), Shane Fontayne (guitar), Marcus Eaton (guitar), Kevin McCormick (bass) and Steve DiStanislao (drums), along with guest appearances from Mark Knopfler and Wynton Marsalis, the album exudes a tremendous sense of vitality, featuring complex chord changes, unusual key and time signature changes and an abundance of subtle polyrhythms. All this is complemented by beautiful melodies and harmonies that soar and intertwine—hallmarks of a Crosby project. This record may well be viewed as his masterpiece.

Pulse: How do you account for the fact that, at 72, your voice is as supple and as powerful as it was 50 years ago?
DC: I can’t. When something like that happens, sometimes you can take credit and sometimes you simply have to stand back and be grateful. That’s really where I am. I certainly didn’t take care of it. I didn’t treat it like the gift it is, and I’m kind of stunned… but the album was very well recorded by my son James. I got the drugs out of the way, which gives me consciousness, but I’m kind of amazed at the quality level that we managed to deliver.

Pulse: How and when did Croz begin to take shape? I heard “Radio” a couple of years ago when you performed it with Crosby/Nash. But what about the rest of the album?
DC: The songs are the key, man. If you don’t have a song that you can sit down and sing to somebody and make them feel something, you don’t have the wherewithal. And if you take substandard stuff and put a lot of production on it, you’re just polishing a turd. The key to the whole process is good songs. Once you have them, you serve the songs. Anything else is putting the cart before the horse. You are there to serve the song. That’s the way we look at it, James and I. The fact that you heard “Radio” two years ago will tell you how long we’ve been working on it. We might have even started before that, but I think that was the first one where we looked at each other and said, “Yeah, we’re sure.”

Pulse: Jerry Garcia was quoted as saying he felt you brought a better performance out of him than he was capable of achieving on his own. What do you bring to the mix that inspires other musicians?
DC: Perhaps it’s devotion to the song and a certain freedom from preconception. A willingness to let the music go where it wants to go. I think that’s a tremendous compliment; I didn’t know Jerry said that. I really loved the guy. What we would do, he and I, was precisely that. We would feed each other a scrap of a song and see what would blossom out of it. We would write songs together as we were just goofing off, just jamming. Some of our jams turned into songs. 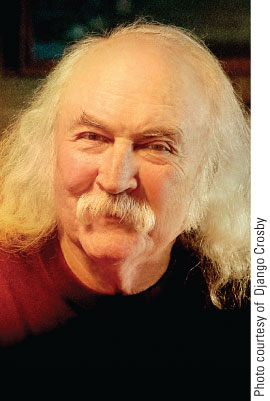 Pulse: Any thoughts on some of the other people with whom you’ve worked over the years? Graham Nash, for example…
DC: The man’s had a huge effect on my life and I guess I’ve had a large effect on his. He is a fantastic harmony singer, probably the best there is. I put him through a lot. He watched my whole downhill slide, tried to stay my friend and was there for me when I started the long rung-by-rung climb back up. He’s a good man; a self-made sort of Renaissance man, fascinated with everything, a brilliant photographer, a brilliant thinker. I love him.

Pulse: Stephen Stills?
DC: Well, you know, he’s a tougher guy on the surface, but underneath, there’s somebody at home to talk to. My God, has he written some wonderful stuff. “And there’s a rose in the fisted glove, and the eagle flies with the dove, and if you can’t be with the one you love…”

Pulse: Neil Young?
DC: He’s a really fascinating human being. I think the thing to notice about him is, first off, the talent that he has for writing songs that really matter to you. “Old Man” will always be one of my favorite songs, always. He set the bar really high. Now, he hasn’t always come to that bar, but I think that most of the time he has. The thing I love about him most is that he’s pretty fearless. He will push the envelope; he will go out on the edge. Live, he’s the most live “live” guy you ever saw. He approaches the song the same way Nash and I approach harmonies live; we don’t ever do it the same [way] twice. Neil has never played a song the same way twice in his life. He’s always out there on the edge, looking for his muse. It’s the exact opposite of show biz.

Pulse: You recently performed “Turn, Turn, Turn” as a tribute to Pete Seeger, why?
DC: Well, he taught it to us! This is a man who was brave enough to stick up for what he believed in, right from the get-go. He learned it from people like Woody Guthrie and he taught it to us. And thank God we were listening. He spent over 90 years on this planet trying to do the right thing. He was such a stand-up guy, and at the same time so gentle and so fiercely human. I don’t know of a more exemplary human being. I rank him up there with Martin Luther King and people who were willing to risk their lives for what they believed in.

Pulse: Who are some current artists you respect?
DC: I’ve always dismissed rap and hip-hop as being incredibly shallow and pointless. And then my son turned me on to Macklemore and Ryan (Lewis). I listened to “Ten Thousand Hours” and read the lyrics. It was a shocker to me—I had to change how I felt about things, but there it is. Now, Lady Gaga—what an interesting person! This is a person who maybe is as crazy as a fruit fly. But she is completely unlike all the manufactured pop tarts. Lada Gaga was a shocker for me because I was sitting 50 feet from her and I could see her hands and I could see her face and I could hear her sing and the shock was that she can really play and really sing. And that she really cares. She sang “You’ve Got a Friend” to Carole King and brought tears to my eyes.

Pulse: I’ve heard you’re also a fan of Peter Gabriel. What draws you to his music?
DC: I had a reaffirmation. I went to see him with the New Blood Orchestra—the orchestration was done so brilliantly, I think that guy who wrote the arrangements should get a medal! And I think Peter should get one for bravery and for being the only person to have his stuff orchestrated and then play it that way; the only guy I ever saw, anyway, who actually pulled it off. He’s an incredible singer. To this day, he’s still one of the best singers alive and one of the best writers.

Pulse: Would you ever consider working with him?
DC: What are you, kidding? I’d walk to England to work with him!

Pulse: As a self-described Constitutionalist and an advocate of political awareness, what advice could you offer to young people as they grow into adulthood?
DC: Well, you’re facing a very difficult task. Your government is… a corporatocracy, not a democracy, and that’s a very worrisome situation. Nowadays, it’s very tough for young people not to feel that they’ve been handed an impossible situation. I don’t blame them for doing things like Zuccotti Park and other places where they said, “We know we’re being handed the short end of the stick and we may not be able to stop you, but…we’re watching.” It’s not a good situation; it’s not easy for any young person to look at and feel that they have a path ahead of them that they can have confidence in. In the face of all that, my advice is that you simply can’t roll over and put your paws in the air. If you’re going to be a stand-up guy, that’s what you have to do. You have to find ways to fight the situation rather than just accept it, ways to keep it from degrading you.

Pulse: You seem to be working harder with the passage of time, do you hear the clock ticking?
DC: You get a sense that you’ve only got a certain amount of time and you want to spend it the best you can. We treasure our time more, as we get smarter, as we get older. We say, “Oh, damn, I wish I hadn’t wasted as much time as I did.” Hopefully, we get smarter. I love being able to play music. I don’t like being away from home, I don’t like eating restaurant food, I don’t like being alone in a motel room and stuff, but I love to play!

Pulse: Graham Nash has alluded to a possible CSNY tour this summer, can you offer an update?
DC: You’re asking the wrong guy! [Laughs.] You know who you should be asking! [Referring to Neil Young, the usual catalyst for all CSNY reunions.]