For those who enjoy sipping and savoring a white or red, there’s a bevy of exceptional wine destinations to visit in classic European regions and in “the new world,” which includes Long Island. How lucky we are to live so close to North Fork winery tasting rooms and to be able to savor the best local foods and wines at restaurants like the North Fork Table and Inn. It even feels like France, sipping rosé at an umbrella-topped table on the gravel-based terrace at Croteaux Vineyards in Southold.

But though we all value our local bounty, the endemic enthusiasm for traveling to far away wine regions offers new pleasures: Discovering distinctive terroir and topography, exciting foods and wines, diverse cultures and regional recreational opportunities.

This ABC of winemaking estates introduces Abadia, Barnardus and Caudalie—located in Duero, Monterey and Bordeaux, respectively. These winery hotels are located on vineyards and each offers two restaurants, a spa and tastings. Each is also located near a major airport. Another bonus? A plethora of non-wine-related activities are within reach. 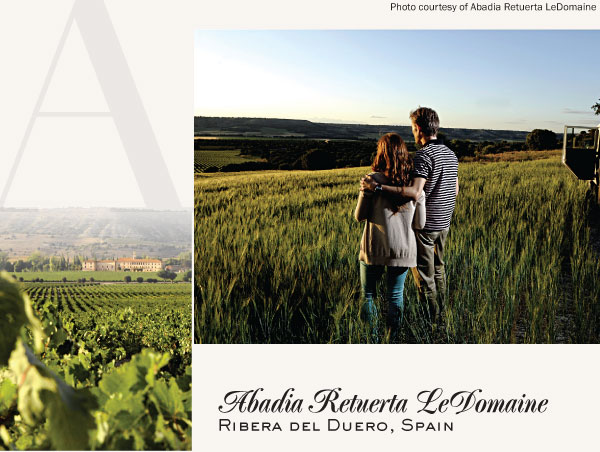 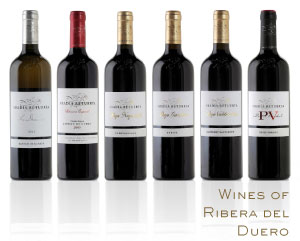 The Wonders of Wine
The prestigious Ribera del Duero wine region extends along a high, sunny, limestone-rich plateau in northern Spain and is second only to Rioja in Spanish wine sales. It’s famous for tinto fino, a popular red made from the predominant tempranillo grape. Wine production here began in the Roman era, increased when monasteries arrived and inaugurated its current popularity with Vega Sicilia in 1864. Currently, there are more than 250 wineries in the region, which Wine Enthusiast named Wine Region of the Year in 2012.

At Abadia, there’s a group of expert wine hosts who escort guests on wine “safaris” in open-air vehicles along the river, under truffle-touched oak trees and through the orchard and vineyards; the experience culminates with a tour and tasting at the winery. The stunning, modern facility showcases their award-winning Petit Verdot 2010 and Pago Negralada 2010 and has exhibits in glass canisters that illustrate the local terroir.

Away From the Vine
Valladolid, the regional capital of Castilla y Leon carved by the Duero River, is a few miles from Abadia and only 70 miles from Madrid via car (or a 60-minute train ride via AVE—the Rail Europe trains that silently rocket at nearly 200mph). As Spain’s capital until the 16th century, Valladolid is where Ferdinand and Isabella married, Columbus died and Cervantes wrote don Quixote (1603-1606). Its historic Plaza Mayor is home to town hall, the cathedral, bars and restaurants where local pork, cured ham, sheep cheeses and wild mushrooms are on the menu along with the regional specialty: Cordero Asado, a roasted suckling lamb dish that is usually prepared and served in earthenware. 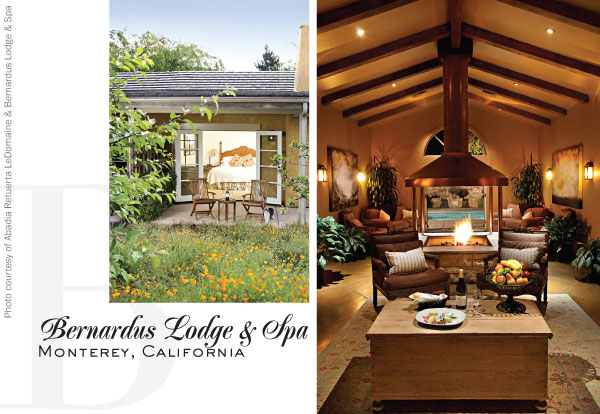 Barnardus Lodge sits on a lush, 26-acre oak and lavender-studded Carmel Valley hillside and is one of the most prestigious hotels in this wine region. Located on the Monterey Peninsula, it is reached by air from San Francisco (120 miles north) and Los Angeles (330 miles south). The main lodge houses spacious lounges and warm restaurants, among which Marinus—known for its raised hearth and 12-foot fireplace—is one of the area’s best. Wickets Bistro is another inviting haven for a casual lunch and the romantic spa, decked out in flower-filled gardens, terra-cotta walls and bubbly fountains, offers a variety of marine-inspired and vinotherapy treatments. (The latter uses grape seeds and skins, said to be excellent for anti-aging purposes because of their anti-oxidant properties.) The 57 grand and gracious guest suites are clustered in hillside buildings facing rose gardens or vineyards. The property boasts an organic garden, a bocce court and two swimming pools.

The Wonders of Wine
The Monterey wine region sprawls 100-miles along California’s central coast and is a destination with both modern and historic credentials. Franciscan friars introduced wine grapes here 200 years ago and it is now one of California’s largest wine producing areas. The cool, coastal, sun-soaked valleys are home to about 43,000 acres of wine grapes, 100 vintners and 40 tasting rooms.
Guests can tour the on-site 10-acre estate vineyard, Ingrid’s Vineyards, and also visit the Bernardus Winery Tasting Room, located in Carmel Valley Village 5 minutes from the hotel. Arrangements can also be made for private tours of the 46-acre Bernardus Vineyards & Winery, which is planted with cabernet sauvignon, merlot, cabernet franc, petit verdot and sauvignon blanc grapes. Here, the wines are aged in traditional French oak and the Marinus Estate Bordeaux-style red wine is notable.

In picturesque Carmel-by-the-Sea, visitors can purchase a passport for the Carmel Wine Walk to taste flights in about a dozen tasting rooms; corkage fees are waived at participating restaurants. The self-guided winery tour is centered around boutique, gallery and restaurant-lined Ocean Avenue and its neighboring plazas and cobblestone alleyways where tasting rooms—an intimate living room in a fairy tale cottage, a teeny bar in a storefront or a stunning, mirrored space serving tapas—are all within a short walk of one another. The passports never expire and give visitors ample opportunities to meet a variety of winemakers and sample lesser-known wines.

Away from the Vine
In Monterey the city, there’s Old Fisherman’s Wharf, Cannery Row, historic adobe house museums and the ever-enthralling Monterey Bay Aquarium. The peninsula is famous for its awesome recreational options: Whale watching, kayaking, hiking the scenic coast at Point Lobos State Nature Reserve, biking the coastal and inland parks, golfing at Pebble Beach, racing at Skip Barber Racing School and driving along the 17-Mile Drive. The captivating curvy coastal road along oceanfront cliffs and Torrey pines leads to Sierra Mar at Post Ranch Inn, in Big Sur, which is unrivaled for both its culinary excellence and its daytime vista.

Even those who flock to Monterey for its major golf tournaments, the Concours d’Elegance and the annual Food & Wine event appreciate Californian gastronomy, which favors local, hook-and-line caught fish, sustainable seafood and organic, regionally grown produce. Chefs such as Executive Chef Justin Cogley, who received Food & Wine’s Best New Chef Award for 2013 at Aubergine, pride themselves on incorporating the finest ingredients on their menus. 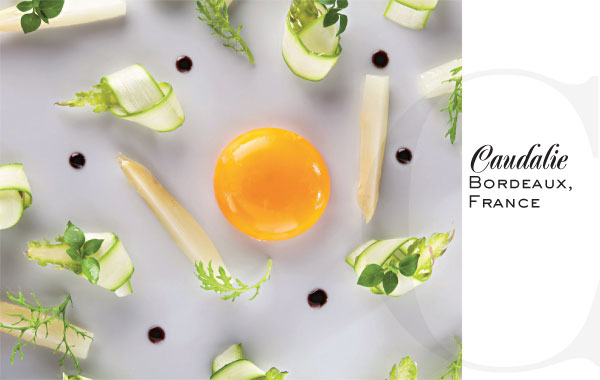 The Cathiard family-owned hotel, Les Sources de Caudalie sits on the Smith Haut Lafitte winery estate in Martillac, just 15 minutes by car from Bordeaux. The hotel sits within the 277-acre, sculpture-studded vineyard where it’s not unusual to see a horse-drawn plow. Fewer than 50 lodgings are within the historically- themed buildings where a converted barn was constructed with beams and roof tiles from Chateau Mouton-Rothschild.

The Cathiards inaugurated Caudalie Vinothérapie Spa. In addition to the natural, spring-fed indoor thermal pool, it is here the anti-oxidant rich grape seeds and skins were transformed to make anti-aging products and treatments to become the world’s first vinothérapie spa. One treat: Cabernet Crush exfoliates with grape seeds and local Gironde honey. Another is an authentic barrel bath, where guests soak while sipping a glass of wine and viewing the vineyard.

The Wonders of Wine
Bordeaux produces world-class wines in 1500 wineries and is known for its reds: Merlot, cabernet sauvignon and cabernet franc. Though there are significant, lesser-known whites produced in Graves. When oenophile Thomas Jefferson visited Bordeaux in May 1787, the 310-mile journey to Paris took days; now, it’s an hour’s flight or a three-hour, high-speed TGV train ride. Jefferson’s preferred premier cru was La Tour de Ségur, by Château Latour, one of the familiar names among top chateaux such as Haut-Brion, Lafite-Rothschild, Mouton Rothschild and Pétrus.
At Château Smith Haut Lafitte, which was classified Grand Cru in 1842, owners Florence and Daniel Cathiard live in the château built by George Smith in 1739. Their winery is a spectacularly stunning venue for gala receptions and it welcomes English speaking guests for regularly-scheduled winery tours and tastings. The Smith Haut Lafitte 2001 red has a reputation as the “Gravest of the Graves,” consistently earning high praise from experts and laymen alike. 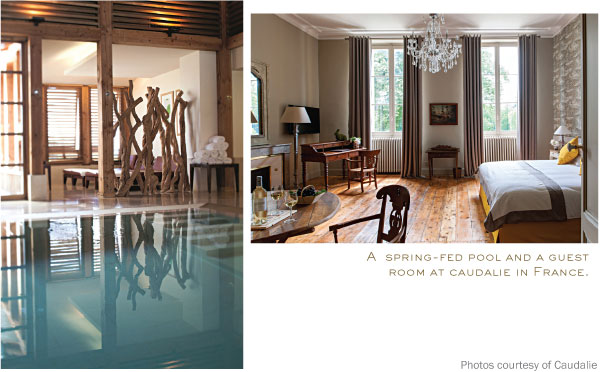 Away from the Vine
As a city Bordeaux is a stunning UNESCO World Heritage Site that’s easily explored on a silent, high-tech tramway. Tram B travels from the Place de la Comédie—where the newly restored Grand Hotel Bordeaux faces the gorgeous Grand Théâtre de Bordeaux—to high-end boutiques on Rue Sainte Catherine in the Golden Triangle. The modern art museum and the three-mile pedestrian walkway adjacent to the Garonne River are other good ways to work off gastronomic indulgences. The city is notable for its whitened 18th century façades punctuated with wrought iron railings, sports bars in La Victoire and soccer matches at Stade Chaban-Delmas.

Wine enhances life wherever the venue. In Paris, when tourists read “Un jour sans vin, c’est un jour sans soleil” on chalkboard menus, they may not initially value the meaning of “A day without wine is a day without sunshine!” But after taste-testing their ways around these three venues or elsewhere, the wisdom of the sentiment becomes readily apparent. Salut!