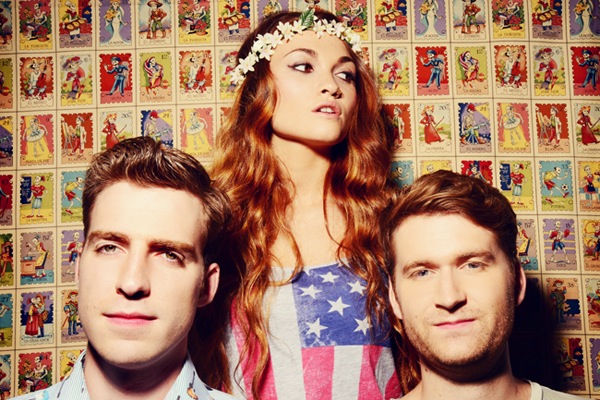 Vagabond is you, ran the mile no shoes
If the sun goes down too soon
Embrace the starry eyed moon
Vagabond is you, swam the sea at the darkest blue
You made it, made it through
From “Vagabond” by MisterWives

Queens native Mandy Lee studied songwriting and opera at LaGuardia High School before becoming the frontwoman for the Bronx-based band MisterWives. A gender reversal on the Mormon term “sister wife,” the band’s name upset a few Mormons at their shows, but the upbeat Lee isn’t too worried about it. “I married all the lads and they became my lovers,” she jokes. The lads are drummer Etienne Bowler, bassist Will Hehir, guitarist Marc Campbell and Jesse Blum on keys/trumpet/accordion. The group played its first show in February 2013 and was signed to Photo Finish Records (a subsidiary of Island Def Jam) shortly thereafter.

Lee’s quirky, soulful voice (with hints of Bjork) perfectly accompanies the dance-folk-rock tunes on MisterWives’ 6-song EP, Reflections, which was released in January. The group is now working on their debut full-length set for release in the fall. You can check out their high-energy show at the Bowery Ballroom on Wednesday, April 16th. Fresh off the heels of playing SXSW for the first time, the 21-year-old Lee dishes about the experience.

Pulse: Who are your biggest influences and how do you describe your band’s sound?
Mandy Lee: Collectively as a band, we’re influenced by groups like No Doubt, The Police, and Fleetwood Mac. I’m inspired by anyone with some serious spunk and soul like Aretha Franklin, Nina Simone, Janis Joplin, and Kate Bush…love me the ladies! Other than pop rock, I think our music falls under the umbrella of soul/folk/dance with hints of reggae and funk from time to time.

P: Do you write the lyrics and the music?
ML: I do write the skeletons of all the songs—lyrics, melody, and structure on the keys. Depending on the weather, we’ll either jam on it until it’s a full sounding song or Et and I will demo it out in our homemade studio and bring it to the rest of the gang once there’s a fully fleshed out idea.

P: What’s your favorite song to sing live?
ML: It’s a close tie between “Imagination Infatuation” and “Vagabond.” There’s a dueling horn solo during “Imagination” that gets everybody dancing on their feet and howling like wolves… And during “Vagabond” we get the crowd to participate in a woah-ing chant that forever gives me chills.

P: How was the SXSW festival and who would you most like to tour with?
ML: SXSW was a dream! A crazy, sunny, sleepless, wild dream. It was our first time being there and we played a handful of shows that blew our minds. It was pretty cool closing the week with Perez Hilton’s show playing alongside artists like Blondie and Ingrid Michaelson. We’re currently on tour with The Mowgli’s and they are setting the bar real high with what it’s like to open for incredibly fun, loving, talented people. If No Doubt decides to make another comeback, that would be ideal since they put on one of the funnest live shows I ever did see. If no reunion happens, then hitting the road with Foster the People or Walk the Moon, would be a non-stop sweat fest!