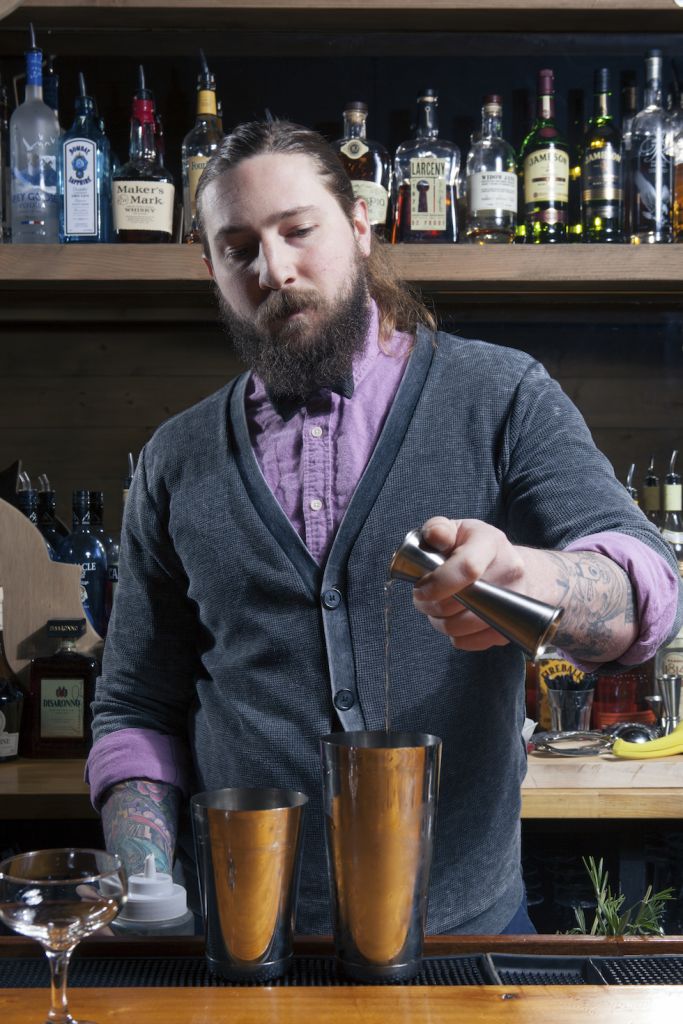 Long Island Pulse: How did you start bartending?
Ryan Garrison: I bounced around a lot. Started washing dishes at age 14 in Baltimore, then eventually moved to Charleston in 2002 as a freshman in college. I was just trying to make some extra cash, doing the ground-and-pound drinks at a sports bar—vodka soda, boom; bourbon and coke, boom. As I started working in other restaurants downtown, I started getting into wine, picking out the aromatics and taste points. Then I slowly started applying that to cocktails. Then the whole pre-Prohibition thing kicked in, at least in Charleston.

Pulse: Is whiskey your favorite spirit to work with?
RG: Yeah. I love its versatility and distinct notes—especially American whiskies with rich caramel and charred oak. It’s something specific. I also think it’s from living in the South for so long. I just moved to Long Island last year. I’m reading Jim Meehan’s book [The PDT Cocktail Book: The Complete Bartender’s Guide from the Celebrated Speakeasy] and he’ll, say, infuse rye whiskey and birch bark and garnish cocktails with Rice Krispies. It makes me want to try to make everything. If it sounds impossible, I want to try to make it happen.

Pulse: What’s recently fallen in that category?
RG: We have a cocktail named Lao Che—an Indiana Jones and the Temple of Doom reference—that’s inspired by thom kha gai, a traditional Thai soup. Steven [Scalesse, co-owner and chef] makes awesome bahn mi sandwiches and I wanted to create something to pair. I realized all the ingredients in thom kha gai are really malleable for cocktails, like lemongrass and coconut milk. I had to make it 10 or 15 times before I got it right. It’s Stoli Citrus, coconut milk, a dash of Pok Pok Som Tamarind Drinking Vinegar and tarragon sake. Then we made a tarragon simple syrup. I garnish it with a little bit of paprika and rosemary. It sounds weird, but it works.

Pulse: What is your signature cocktail?
RG: The Danville Train. It’s a spin on the Rusty Nail, which is traditionally Scotch and Drambuie, but since I like working with whiskies, I really wanted to do something smokier. It’s Virgil Kaine ginger infused bourbon from South Carolina, Drambuie, some ginger beer on top, then finished with a dash of Fernet Branca and a cherry. It’s named for The Band’s song “The Night They Drove Old Dixie Down.” I came up with it right after Levon Helm died. That was my ode to Levon.

Pulse: What’s your after-shift drink? Let me guess…
RG: [Laughs] I’m a beer and shot guy. When you see my tab, it’s usually two or three Miller High Lifes and a shot of Rumple Minze. The funny thing is, when I was in Charleston I’d be out at these dive bars with James Beard award-winning chefs, and they’re pounding PBR and house bourbon. I guess because you’re around the opposite all day. I know the last thing I wanna do after a long shift is make a five-step cocktail. My fridge is stocked with Coors or Miller High Life.

Pulse: Tell me what you’re serving for spring.
RG: I’m really excited because we have a garden outside so I can pick fresh rosemary and mint for lighter cocktails. My favorite is Violet Beauregarde: Sweet rosè bubbly, yuzu puree—yuzu is a Japanese citrus—and a handful of fresh raspberries and blueberries. It’s something for the ladies, but also something that I’d want to drink when the sun is shining. I’m also stoked about the Rug, which is new.

Pulse: The Rug?
RG: [Laughs] Yeah. It’s a mix of two older cocktails—the Brown Derby and the Blinker—with a spin. Both are whiskey-driven. The Rug is 2oz of Bulleit, 1½oz white grapefruit juice, and ¾oz of ginger simple syrup that we make here. Then a spoonful of raspberry preserve and it’s rimmed with maple syrup and pancake dust. It smells just like breakfast.

Pulse: Where did the name come from?
RG: I was passing the cocktail around in our kitchen and Jesse [Corsini, sous chef] was like, “The maple syrup pulls it all together.” Then Steven said, “Well the rug really pulls the room together,” you know, quoting The Big Lebowski. [Laughs] It just feels good to work in a creative environment, because it inspires you. I feel fortunate to have found a home here.