Stony Brook University is known for turning out cutting edge doctors, research scientists and engineers. It’s also turning out compelling artwork. Under the guidance of recently appointed director Karen Levitov (with help from assistant Aubrey Szczygiel, who held down the fort until Levitov settled in), the Staller Center for the Arts will share the work of some of these artists through an exhibit of MFA thesis works at the newly renovated Paul W. Zuccaire Gallery.

Students must bring their own inspiration to the program, but the MFA degree trajectory gives this select group of up-and-comers access to the essentials required to bring their ideas to life: Time, space and connections. Students also get their hands on professional-grade tools (kilns, darkrooms and presses) as well as the privacy and freedom that come with individual studio space. Students also work closely with established professional artists in the LI/NYC area, enabling them to share ideas, techniques and contacts. And the university offers the suburban/urban dichotomy that Long Island artists have always enjoyed. From our unique geographic location they can explore the deep, turbulent waters of the New York City art world while also escaping to the hilly, leafy North Shore to reflect, decompress and get down to business.

“What you see in the gallery today is the result of hours in the studio, working with faculty and talking with each other as our students forge the future of the art world,” said John Lutterbie, chair of Stony Brook’s Department of Art and Theatre Arts. “You may find some of the work challenging, humorous or simply beautiful, but all of it reflects a deep commitment to the making of art.”

Featured artist Nicholas Warndorf exemplifies this commitment. His “2 Untitled Panels” features a paradox of frantic depth—cluttered images, graphite and ink, standing beside the sparse bliss of two remote dots floating on a sea of white. This duality demonstrates Warndorf’s mature and refined sense of density and distance, detail and detachment.

“I am interested in what can be seen, what can be known and the differences between the two,” said Warndorf. “My work in the exhibit was developed as an accumulation of fragments. A fragment on its own might not offer much, but when fragments are accumulated, pieced together and arranged next to each other, they start to offer a bigger picture and one can start making connections. The general theme I was working under for this piece was information, mapping, surveillance and ways to see and be seen.”

Warndorf’s previous studies as an art and philosophy undergraduate at Oberlin College have led to a body of work that invites a worthy discourse on art as intention. He makes some wildly subversive raw material choices and tops them off with some ballsy titles. In “Now We’re Sons a Bitches,” he borrows a touch from Warhol and a touch from the war room in Homeland as he takes small square portraits of anonymous individuals and spreads them out in an expansive matrix—a wall of everyday people transformed into perpetual perpetrators.

In “Monuments,” Warndorf blows up the boundaries of useful recycling by taking found garbage and honing it into long, cone-like antennae made of street trash, literally turning garbage into skyward rods of reverence. Viewers come away with the very real idea that nothing sets out to be crap. This resurrected riff-raff reminds the spectator that it’s human nature to have the best intentions. And when life tears us up and tosses us aside, we have it in ourselves to gather the scraps and build again. 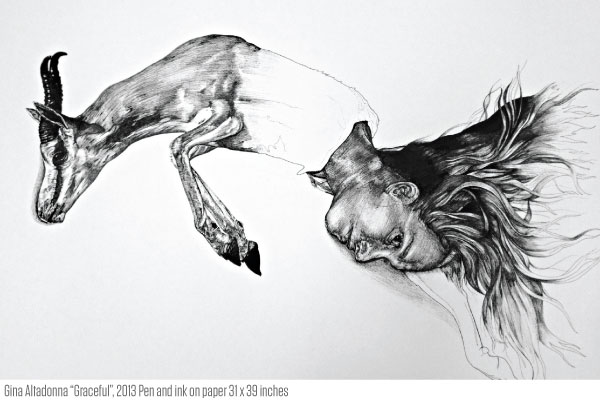 Gina Altadonna has undergone a similar transformation and channeled it into her work. Her feverishly detailed and personal ink and paper drawings are an exposé of heart, mind and soul. Loosely evoking the Greek myth of the Minotaur, Altadonna’s drawings and paintings blend her own persona into elaborate and kinetic representations of other creatures. The hybrid results reveal the rocky marriage of her carnal impulses, personal struggles and creative intellectualism. It’s a cathartic exercise and Altadonna pulls no punches. In “Graceful,” she draws herself in a detailed, symmetrical synergy with a galloping African gazelle. The piece reads as both a wish and a revelation, a statement of who she knows she is and what she thinks she can become.

“The focus of my work revolves around my personal history,” said Altadonna. “The goal of my artwork is to create a narrative revealing my own struggles.

My work stems from my own neurosis, obsessions and insecurities, which reflect the stark and disturbing truths of who I am. The question does not lie in what I see in the mirror, but rather in what society dictates should be there.”

Joanna Bavero’s featured piece marries a penchant for Warndorf’s eclectic choices with Altadonna’s deeply personal aesthetic. “Closed In” uses a blend of materials (graphite and frosted polycarbonate) to push and amplify the notion of psycho-sexual self-reflection. The result is efficient and rife with subtext. She manages to detail the self and obscure it in the same choice. Bavero’s intention, not unlike Altadonna’s, is to reveal herself—and encourage the viewer to take a hard look in the mirror as well.

“Materials play a significant role in my art practice,” said Bavero. “Reflective surfaces lend themselves to the voyeuristic nature of the artwork, allowing the viewer to literally see themselves in the piece.”

Fatima Shakil and Katherine Moriarty provide a compelling contrast as their works round out the exhibit. Shakil’s “Reforming Surfaces” is a disciplined and patterned meditation, an exercise in three dimensional, triangular mind travel, while Moriarty’s innovative use of sand and glue on glass in “Untitled (Flood 5)” creates a loose mandala of drift and decay—a scatterplot sense of the limitless.

On short notice, Levitov has done an admiral job of combining a unique crew of artists who have made some daring choices in terms of materials, message, process and execution. It’s comforting and inspiring to know that some of the sharpest minds not only in science but also in the arts are flourishing right in our own backyard.

“Overseeing the installation of the MFA exhibition is a great opportunity for me to jump feet first into the position of gallery director,” said Levitov. “The Stony Brook community has been very welcoming and there is a lot going on around campus. I am working on some really dynamic exhibitions for the (Paul W. Zuccaire) gallery for the fall. It is an exciting time to be here.”

The MFA Thesis Exhibit is on display at the Paul W. Zuccaire Gallery in Stony Brook University’s Staller Center for the Arts through April 15th.