In a world where walls are made of plastic, stone, steel or glass, green walls return us to the forest primeval one pane at a time. A planted vertical structure hangs like a piece of framed artwork immediately making a space more inviting. These gardens were long the domain of commercial architecture, but are now available as small-scale, space-saving modular systems for homeowners. A wonder for the eyes, they’re a boon for the respiratory system too. The plants absorb airborne pollutants, which are then processed by a network of roots and microorganisms. In the end, harmful contaminants are turned into helpful fertilizer. Use them indoors to dress up a feature wall or outside to grow veggies in a small space.

The modern system was perfected in the late-80s by Patrick Blanc, a French botanist and tropical plant specialist. Struck by the aesthetics of plants surviving under dense, dark jungle canopies, Blanc developed an artificial system that allows plants to grow on vertical surfaces. He feels that the biological efficiency of agricultural architecture is pleasing to the eye and connects viewers to nature. His original system was a hydroponic (soil-less) sandwich of waterproof plastic sheets and felt attached to a metal frame. The felt was an anchor point for plant roots and a reservoir for nutrient-rich water cascading from above. Blanc’s vertical gardens exploded in popularity and his concepts appear in commercial structures like Singapore’s Changi Airport and on the outside of PNC Bank in Pittsburgh.

Today, many green wall systems developed for consumers and landscape designers are a hybrid of vertical and traditional gardening methods, most noticeably in the use of soil. Nate Jackson, retail general manager at Hicks Nurseries in Westbury, has seen green walls move from commercial spaces to become “a relatively new concept from a homeowner’s standpoint.” Jackson likes Woolly Pocket, a sturdy 1- by 2-foot felt pouch with a waterproof liner, similar in design to Blanc’s. And it is modular, “so you can create as little or as much as you want,” he said. Jackson also recommended GroVert, a vertical planter frame with built-in irrigation channels. When the plants mature, Jackson calls the structure “a living picture.”

Landscape art and clean air aside, green walls are also a therapeutic tool. Installed in 2011 by Mark Scaramucci, owner of Permascape Designs, a Port Washington-based firm specializing in green landscape design, a 24-square foot wall is meant to be touched as a tactile therapy beneficial for Alzheimer’s patients in one of Permascape’s quasi-public installations. Sedums and other succulents, plants and flowers known for their thick, fleshy structures, cover the wall and can withstand the curiosity of onlookers. Staying local, Scaramucci used a green wall system made by Plant Connection in Riverhead. The plants are nursery grown before being installed to ensure root strength. The maintenance is more intensive than traditionally planted material, “especially during the first year. This is a critical time for avoiding minimal plant loss and to get watering needs right, especially during the hot months,” Scaramucci said. 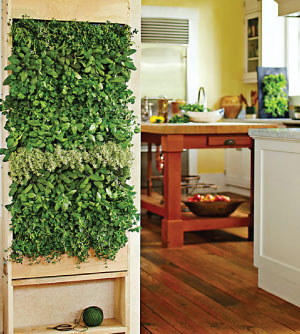 Using a modular system like Woolly Pockets, green walls start at around $100. The payoff is an ever-changing canvas of growth and hue.

INSTANT LIVING WALL GREEN THUMB
As it is with most things, getting started is the hard part. Even for DIY jobs, a little consultation will go a long way. Whether flying solo or with a navigator, keep the fundamentals in mind.

Good plants to use
Stick to climbing vines, petunias, torenia, lobelia, begonias, sedums and other succulents; herbs like basil, rosemary and chervil; fruits and vegetables like cherry tomatoes, strawberries, cooking greens, radishes and anything with a shallow root system.