Cathedral Pines County Park in Middle Island is a scenic setting at the headwaters of the Carmans River. A hidden gem with camping, hiking and rare stands of towering white pines, the bucolic vista is also a hot spot for Long Island’s small but passionate cadre of mountain biking enthusiasts. These riders proved that actual mountains are not required for mountain biking and neither are hills or exotic terrain.

On warm weekends from April to October, hikers are liable to encounter dozens of mountain bikers, silently swooshing past them on the six-mile-long park loop. That the bikers peacefully coexist with families and other park users is no accident, said Michael Vitti, president of Concerned Long Island Mountain Bikers (CLIMB). The group began creating the trails in the mid-1990s after striking a deal with Nassau and Suffolk counties to build and maintain them. The network now spans 150 miles across the Island on 14 trails from Queen’s Cunningham Park to Montauk’s Hither Hills State Park.

CLIMB’s website rates all the trails as beginner, intermediate or advanced; they range from 4 to more than 20 miles each. When mountain biking took off in the 80s Vitti discovered it was a way to maintain conditioning in the surfing off-season. “It’s less boring than the gym and people become addicted to it,” he said. Vitti tries to get out at least three times a week and rides year round with all-weather gear. Although hybrid bikes are serviceable on the trails, mountain bikes are specifically constructed with durable suspension to handle the bumpy terrain and changes in elevation.

Mountain bikers make up a diverse cohort with more than just daredevil young guys. There are plenty of middle-aged off-roaders who head to local parks on the weekends. Vitti estimates women make up 40 percent (and growing) of the community. For those just starting out he recommended trying a beginner trail like the flat Edgewood Oak Brugh Plains Preserve in Deer Park. The 5½ mile circuit carves its way through pitch pine and scrub oak barrens and has markers along the way with some paved sections for families with younger riders.

Eddie Schrouder of Babylon Village is a road cyclist who followed the mountain biking trajectory of starting small, getting the bug and going bigger. “I bought a $60 bike from Wal-Mart,” he laughed, which he then smashed into several pieces after a week of riding. He bought a better bike and found that he loved the adrenaline rush of conquering new and harder trails. The benefit of the endurance training didn’t hurt either. “I needed something that was [a fun way] to stay in shape,” he said.

Schrouder’s favorite trail is Stillwell Woods in Syosset. CLIMB maintains it as a two-mile educational trail with signage and marked obstacles to teach socially responsible and environmentally-friendly riding techniques.

Long Island’s flatness isn’t necessarily a negative when it comes to learning how to mountain bike, either. Instead, it’s a plus, said Gary Wladyka, owner of Rocky Point Cycle bike shop and a mountain biker himself. “A beginner can start out and get really good just from riding on Long Island.” As cyclists progress, conquering the trails faster is the challenge. A lot of local riders head out of state for races like the Vermont 50, a 50-mile off- and back-road premiere mountain biking event. “Mountain biking is about little victories, like making a hill you couldn’t make before,” said Wladyka.

His shop is within 15 minutes of 4 popular trails, including Rocky Point and Calverton, which off er some challenging hills to conquer. The former even offers moguls (small packed-dirt hills that look like speed bumps) and some steeper inclines for advanced riders.

Schrouder agreed that the trails offer an exciting challenge, kind of like a live action video game. “It’s basically my favorite thing to do now. It’s a rush—you might be heading down the trail going 17mph and then you come around a turn and there’s a giant root. You don’t know what to expect and weather conditions change the trails, too.”

He survived his first fall, over the handlebars after hitting a piece of wood in North Babylon’s Belmont Park, with only a sprained wrist. “It’s a lot of sprains or maybe a broken collarbone,” Wladyka said. But Vitti thinks it’s actually a safe way for road cyclists to learn bike handling before venturing out onto the mean streets with cars.

It’s not just sustainable transportation that mountain bikers care about, but also by necessity, conservation of parkland. They become de facto stewards of preserves and trails. Balancing the wear and tear of the activity with environmental sustainability is a priority for those who want to see growth. “I wanted to do something for the environment,” Vitti said. “We are doing conservation eff orts, designing trails to be sustainable.” Getting Long Islanders out into their local parks may prove the best long-term conservation strategy of all, however. “Just the act of riding a bicycle, looking at natural settings is good for anyone,” even kids, who can join in as soon as they can ride a two-wheeler.

The sport can be social and a lot of riders team up with a partner for rides. But it also works as a solitary activity, a chance for bikers to commune with fresh air and nature. Vitti encourages new riders to try out one of the beginner trails before investing in a mountain bike, but no other gear besides a helmet is necessary.

Schrouder has found himself riding through the woods in parks he never knew existed. And mountain biking has become more than just a way to stay in shape for him. “I’m definitely way more serious now than when I started with my $60 bike. I want to do some races and get involved in the community. It’s a big part of my life now.”

READY TO GEAR UP? 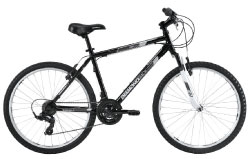 BEST FOR BEGINNERS: 2014 DIAMONDBACK OUTLOOK
For new riders on a budget, the sport is still accessible. Entry-level mountain bikes, like this seven speed Diamondback, boast tougher frames and tires than standard hybrid bikes. And they’re designed to withstand basic dirt trails. This one includes front suspension to absorb bumps. $300; diamondback.com 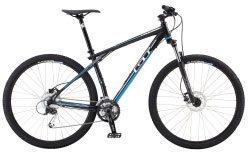 BEST FOR WEEKEND RIDERS: GT KARAKORAM SPORT
For a mid-level biker, the 2014 GT Karakoram Sport is a light, strong bike that offers plenty of options. Riders can choose between 4 aluminum frame sizes, each with 27 speeds. Other advantages are 29-inch diameter, grippy tires and disc brakes with greater stopping power than traditional versions. $700; gtbicycles.com

BEST FOR ADVANCED RIDERS: AIR 9 CARBON 1-STAR X7
Twigs and branches won’t snag the shifter cables on this bike, which are run inside the frame. When it comes time to lift the bike, on and off the rack or overhead through a deep stream, riders will appreciate the superlight carbon-fiber components. $2,700; ninerbikes.com

Got the itch? CLIMB gets riders started. Look them up for tips on trail etiquette and falling safely. Although, on relatively flat Long Island, mountain biking isn’t as risky as its reputation might suggest.