When properly folded, a simple 19-inch square piece of silk or cotton speaks volumes about a man’s style. Unlike the rules that dominate shoes and ties, the pocket square plays things looser. But that doesn’t mean a gent can pick the color blindly or jam it into his pocket, either. Remember: The pocket square’s pattern should work with the shirt and tie, but also stand apart.

For the office: The mad man
During the business week keep things simple with a cotton hanky that forms a classic straight line just above the pocket. The execution is easy enough to handle in the elevator, while on the phone or in the middle of the commute. The simplicity of the straight fold guarantees a clean and professional look. But that doesn’t have to mean dull: Turn the square askew to create a single peak. 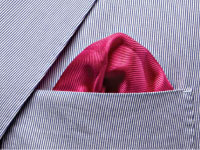 For casual occasions: The puff ’n stuff
After hours, the pocket square can be as loose as the tie. Few folds are as casual as the one that isn’t a fold at all. Simply gather the pointy ends of the fabric in your fingers, tuck them into your pocket, then give the emerging poof of fabric a couple plucks to ensure that jaunty attitude. Imagine securing your pet octopus’ tentacles in your pocket, you’d still want the little guy to have a view. 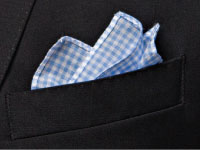 For formal events: The three-peak fold
The more ornate style of this fold shines with some flair against a typically conservative suit color. The pattern is more complex, but it’s far from origami:

Step 1: Fold the handkerchief in half triangularly, then fold the bottom right corner up to form twin peaks.
Step 2: Fold the left corner up and to the right to create the third peak.
Step 3: Now take the remaining corner and wrap it around the base of the structure. Gather the bottom of the fabric and tuck the handkerchief into the pocket so the points stick out about 1½ inches.