It started four years ago after the BP gulf oil spill. When the people living in the Gulf states started losing their jobs and homes, they began dumping their pets off at shelters to the tune of thousands of animals per day. Candy Udell, a dog lover, signed a petition urging BP to take responsibility for the animals and it became a catalyst for her rescue efforts in Alabama. It’s what led her to Bobbie Taylor, a lone rescuer in Lawrence (Alabama’s poorest county) who was “drowning in animals.”

It wasn’t just BP’s impact that made the orphan animal situation untenable. Alabama, a state that doesn’t have spay/neuter law, is prone to “black dog syndrome,” where light-colored dogs are selected over black ones. Aside from that and dire economics, it had another problem: Hunters used dogs for a season and when they’re done, they dumped the pups off.

Udell had been involved in animal organizations for 15 years prior to teaming up with Taylor. She established Rescue Paw Foundation in 2011 mainly, “to know where the money was going and to help raise money to be able to care for these animals.”

That evolved into Udell designing a line of jewelry from which she’s able to allocate 90-95 percent of proceeds directly to the cause. Rescue Paw in turn disburses the funds to transportation, vetting, Taylor’s rescue services and the no-kill Animal Rescue Shelter of Lawrence County. She’s also contributing to shelters in Texas and throughout the South. Udell saw a propensity for animal dumping there and a lack of adoptable pets here as needing a liaison. “I like to do the places that are really off the radar, that nobody looks at. It’s easy to work in a place where there’s a lot of help. It’s a challenge to work in a place where no one wants to help.” But really, her interest in helping animals started long before the Gulf disaster.

Growing up in Northern New Jersey, the pets in Udell’s home were more than just animals she cared for, they were her friends and part of the family (even the baby alligators, ducks and chickens). “We always had animals in the house. Animals make a house happy, just like children do. And it’s important to have that in your life and to teach it to your children…it gives them responsibility and it teaches people to be kind to other living things.” She continues to credit taking care of her childhood pets as instilling her with a strong belief in humane education, the core of her mission.

Udell’s taste for the exotic shouldn’t be a surprise. As president of London Jewelers, she is regularly in contact with some of the world’s most precious stones and gems. The brands found in her locations are synonymous with those in the most exclusive shopping capitals of the world. Through London Jewelers, the Udells support a number of local charities such as The Boomer Esiason Foundation, Katz Women’s Hospital, Lustgarden Foundation and Sunrise Children’s Camp. For Glen Cove Homeless Shelter, Udell has even personally cooked and bought groceries or delivered Dunkin’ Donuts cards so those who access the shelter’s services have somewhere to go when its doors close. 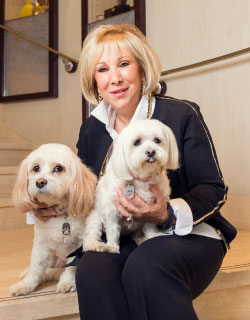 But saving animals is a different kind of passion for Udell. Dogs and cats are constantly getting dropped on her rescuer’s doorstep. Rescue Paw can raise the funds to bring them to credible adoption shelters here like Bidawee (Westhampton), Animal Rescue Fund of the Hamptons (East Hampton) and Little Shelter Animal Rescue and Adoption Center (Huntington). The foundation covers the gas to transport the animals as well as the medicine needed to ensure the pets arrive healthy. Through tornados, floods and everything that’s come their way, Rescue Paw has saved almost 3,000 dogs and cats.

Other organizations are regularly contacting Udell for her help too. She donates the paw jewelry and dog tags to their fundraisers and contributes her energy as an advocate. In Lawrence, she recently secured two grants: One for a spay/neuter law, which she hopes will snowball, and a second for transportation of southern dogs to come to northern shelters.

This past fall Udell also teamed up with HEART, an organization focused on humane education. The Rescue Paw and HEART collaboration created a program for Lawrence County addressing shelters, spay/neuter programs, animal fighting, kindness, compassion, care and safety. It will become part of the curriculum in the schools there for grades 4—6. “This is a really fundamental part of change down there,” she said. “To change the young peoples’ attitudes on how they were brought up to treat animals.”

For this year, Udell’s priority is to get humane education programs into Nassau County schools similar to the ones she started with HEART; and eventually Suffolk and NYC. It’s not a small undertaking, but it’s a natural extension of her belief that improving attitudes towards animals has a direct influence on how people interact. “As long as I see change,” she said, “I’m always ready to stick with it…There’s a lot to tackle here at home as well. And the time is right.”

Find out more at ourcauseforpaws.com