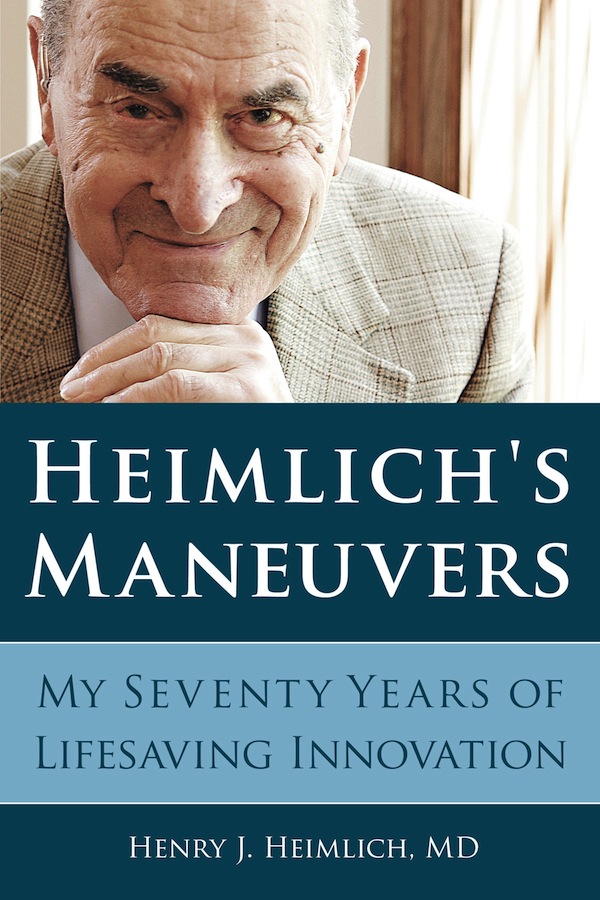 Good job. You’ve done well for yourself. You deserve the Gold Star, a standing ovation. There’s a raise in your future, a bonus for work done right. You deserve a pat on the back – except if you’re choking. And in the new book “Heimlich’s Maneuvers” by Henry J. Heimlich, MD, you’ll find out why, from the man who invented the lifesaving measure.

From the time he was a small boy growing up in New York, Henry Heimlich wanted to be a doctor. His parents were role models: he watched them help others, and he noticed that they never turned anyone away. He wanted to be like them – and he started down that path at age 21, when he assisted the victim of a train wreck until rescuers arrived. That was the first of “hundreds of thousands” of lives Heimlich would save.

While in college, Heimlich led the ROTC band then, as required, enlisted in the military.
After graduation, he was called for duty and served in the Navy on a special mission to China during World War II. There, he taught Chinese soldiers first-aid basics and, because anti-Semitism was rampant in America, he taught fellow soldiers that the myths they believed about Jews were largely wrong.

That bias against Jews almost cost the doctor his career: Heimlich had a hard time finding a residency position after the war ended, but he knew he was in a good spot when he landed at Bellevue in New York. He had his sights set on becoming a thoracic surgeon specializing in the esophagus and, ever the tinkerer, Heimlich began looking for ways to improve old methods of treatment.

Back in China, he’d developed an easier way to treat trachoma and save the eyesight of sufferers. In the 1950s, he developed the reversed gastric tube operation (though he later learned that he wasn’t the first to use it). During the Vietnam War, he developed a way to drain post-surgery chest wounds.

There’s so much delight in “Heimlich’s Maneuvers” and so many surprises to uncover while reading this book. Too bad there’s one big thumbs-down.

First: I was overwhelmingly charmed by author Henry J. Heimlich’s story, and by the jaunty way he tells his tales. Heimlich writes with an obvious sparkle in his eye and it’s a worthwhile trip we take with him, back to his childhood, his young marriage, his early career, his keen eye for invention, and his battle with the Red Cross. Even his World War II tales held excitement.

Unfortunately, it seemed to me that this book sometimes descends into infomercial territory, in which Heimlich uses his memoir to promote his inventions. I thought that marred the feel of this book – not enough to make me want to quit reading, but enough to make me notice.

I think that if you ignore the commercials, you’ll like what you ultimately find here. If it’s a good memoir you want, “Heimlich’s Maneuvers” has that down pat.