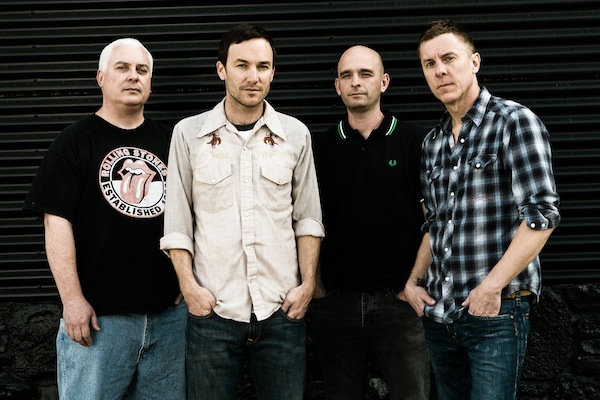 The Toadies are back in the studio working on a retrospective of their material and some new songs set for release in the fall. In the meantime, you can celebrate the 20th anniversary of Rubberneck with the remastered edition out this month, featuring five previously unreleased tracks. The post-grunge rockers were an alt-rock radio staple in the 90’s with primal songs like “Possum Kingdom,” I Come From the Water,” and “Mister Love.” In addition to launching their own tasty beer, Rubberneck Red, and hosting their 7th annual Dia De Los Toadies music festival in their hometown of Fort Worth, TX in September, guitarist Clark Vogeler released the documentary, Dark Secrets: The Stories of Rubberneck, which answers a lot of questions about frontman Vaden Todd Lewis’ mysterious lyrics.

Fresh off the heels of SXSW, where The Toadies—including drummer Mark Reznicek and bassist Doni Blair—ended the festival with a bang, the band will be performing Rubberneck in its entirety on a nationwide tour with a stop at NYC’s Irving Plaza on Thursday, April 24th. Vaden Todd Lewis talks about Rubberneck’s five bonus tracks, new Toadies music and performing live.

Pulse: What made you want to re-release Rubberneck with 5 new tracks for its 20th anniversary?
Vaden Todd Lewis: People still love that record, so it seemed obvious to do a re-issue with a current mastering. One of the bonus tracks, “Stop It,” is a cover of a Pylon song. Three were recorded during the original session, but never saw the light of day for one reason or another. “Rockfish” was a working title and I never managed to fill in the blanks for lyrics. Later on, we cannibalized it for a song called “Waterfall.” The other two tracks are very early live recordings. We felt these extra songs gave a pretty good snapshot of that moment in time.

P: How did the crowd react to your SXSW show? What Rubberneck song did you most enjoy revisiting live?
VTL: It was a great reception at SXSW! Always love playing Stubb’s Bar-B-Q in Austin. I’d have to say “Mexican Hairless” is one of my current favorites to play from that record, mainly because it’s one that we rarely pulled out live over the years.

P: Are you working on new material? If so, will the sound of your next record be vintage Toadies or more modern?
VTL: We’re finalizing a session featuring material spanning our career, sort of a retrospective, where we disassemble and reinvent the songs using different instrumentation. Lots of acoustic guitar, Rhodes, mandolin… It’s a weird and cool record. I’m hoping to have one or two new songs to add to it before its release in September.

P: What do you like about playing in NYC?
VTL: Love the food and the atmosphere. I’m a big fan of the city, and always enjoy playing Irving Plaza.

P: Aside from all of Rubberneck, will you be playing any other tunes at Irving Plaza?
VTL: We’ve been running through Rubberneck in sequence, followed by a set of songs from our other releases. We may pull out “Stop It” and another cover if the mood strikes.

The 20th anniversary remastered edition of Rubberneck with 5 bonus tracks is available on disc and 180 gram vinyl.

See The Toadies perform the album in its entirety at Irving Plaza on 4/24 with Supersuckers and Battleme opening.