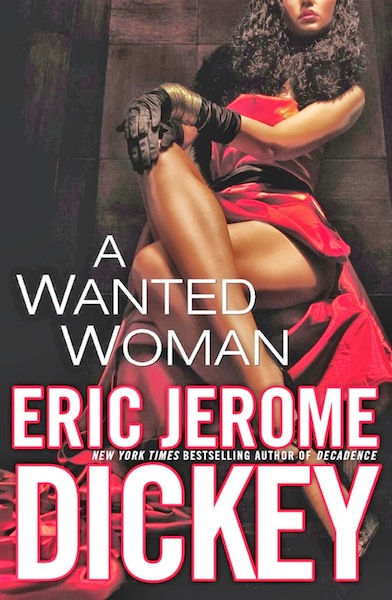 If there’s one thing you’ve learned in life, it’s that the Boy Scouts were right: Always Be Prepared.

Look ahead and get ready for what’s next. Don’t leave your guard down. Cover all bases and expect the unexpected. Still, as you’ll see in the new novel “A Wanted Woman” by Eric Jerome Dickey, there are some things you simply can’t foresee.

It wasn’t always that way; when she was born, she was named Goldilocks to spite her father, who refused to think a Bajan man and a black woman could have a white child with yellow hair. And yet, it was he who laid claim to her when her mother died, and it was he who taught her to fight with hands, feet, and brain. It was he, known as Old Man Reaper, who reluctantly allowed her into The Barbarians, an organization feared around the world.

Few men had earned the M or the X before their agent numbers, but MX-401 had. She was a “woman with a thousand faces,” she was the best of her father but with her own style, much to the chagrin of her superiors. To them, she was a loose cannon but they sent her to Trinidad to do a job nonetheless.

It was supposed to be an easy kill. Intel placed the target – a high-ranking politician – at a party held by the Laventille Killers, a gang of ruthless drug lords who practically ran the island. MX-401 had her orders – to eliminate the target at all costs – but things went horribly awry.

The target wasn’t where he was supposed to be and she had to kill him in broad daylight, along with three others, including two LK guntas. She knew it wasn’t sanctioned. It wasn’t according to plan, which would anger her superiors, but she didn’t know just how angry they were until they hid her in Barbados – and left her there.
Barbados was purgatory. It was an island-prison, and the Barbarians refused to send help. What’s worse: Barbados was a short Jet-Ski ride from Trinidad, and the LK would never let things slide…

Whooo-eee. “A Wanted Woman” is one of those books that gets so under your skin that you’re compelled to turn to the last sentence early, just to reassure yourself that the main character lives. (And don’t bother. You can’t tell).

It’s Die-Hard-meets-Jackie-Brown-meets-Chuck-Palahniuk, but with rocket launchers. It’s fast-paced, gruesome, and violent with wry veins of surprising humor and one of the smartest secret agents you’ll ever meet. Author Eric Jerome Dickey excels at making his thriller heroines over-the-top resourceful and steel-tough, and MX-401 is no exception. This book had me at the introduction, and it’s a miracle that I didn’t rip its pages because I was turning them so fast.

You should’ve already figured out that this isn’t Beaver-Cleaver territory; “A Wanted Woman” is filled with bloodshed and profanity, but there’s nothing iller than a thriller like this. If an action-packed book is what you need, grab it – and be prepared.