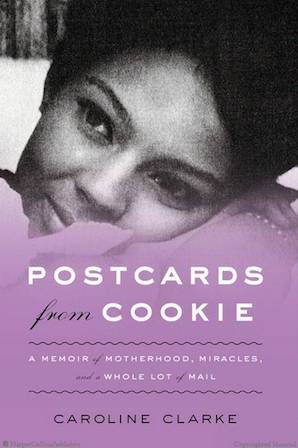 Among the usual fliers, bills, and donation requests in the mail last week, there was something you haven’t seen in ages: someone sent you a greeting card.

It wasn’t marking any special occasion. No, it was sent as a pick-me-up from a friend, a nice surprise at a time when mail usually has an “e” in front of it. But, as you’ll see in the new memoir “Postcards from Cookie” by Caroline Clarke, some snail mail can make your heart zoom.

She was only looking for medical records.

As an adoptee, Caroline Clarke knew she had the right to learn at least that about her birth mother, but health data was only part of the unhidden information in the sealed records. There were lots of clues in what Clarke was told on that chilly afternoon; enough to help her figure out who her biological mother might be. The shocker was that Clarke had known her birth mother’s family for years.

From the time she was almost 8-years-old and learned that she was adopted, Clarke told everyone that she wasn’t interested in finding her birth mother. Secretly, though, she dreamed of making the woman proud and fantasized about accidental, happily-ever-after meetings. She loved the parents who raised her – adored them, in fact – but “all adoptees are curious about their beginnings,” and Clarke was no exception.

Her Daddy was shaken by the news. Her Mommy said to contact the woman. Clarke’s husband was excited for her, but she sat on the information until she couldn’t stand it any longer.

So she mustered up the courage and called Carole “Cookie” Lane.

Cookie was the eldest (adopted) daughter of Nat “King” Cole and, while away at college, had become pregnant. It was 1964 and that sort of thing was scandalous – especially since the father was a white Jewish boy. Maria, Cookie’s adoptive mother, sent her away to a home for pregnant girls. Cookie was 20-years-old.

As Cookie and Clarke excitedly began to erase the years they’d missed, and as they shared “synchronicities” through phone calls and huge boxes of mail, they also got “on each other’s nerves.”
Clarke craved Cookie, but they obviously irritated one another – enough to make Clarke wonder whether their experience was “going to have that fairy-tale ending after all.”

Though adoption-reunion stories are becoming commonplace due to social media, author Caroline Clarke’s is unusual in that there were some amazing coincidences that led her to Cookie, before and after. Obviously, Clarke is awe-stricken about those and yes, I was pretty impressed, too.

And yet, “Postcards from Cookie” has a bit of a Peeping-Tom element: this is a very personal story of adoption and love. While I thoroughly enjoyed reading it, it’s easy to feel uncomfortable watching two vastly different personalities dance around one another, trying to get along.

So, ultimately, do they?