At 34, Nebraska singer-songwriter Conor Oberst is all grown up. His latest album Upside Down Mountain (due for release May 20), is his most mature by far. Perhaps this isn’t surprising given Oberst’s new lease on life—in 2010 he got married and in 2012 he started a new business, a bar in his old hometown.

On this country-flavored album, he seems to be echoing some of the great songwriters in Americana music like Johnny Cash and Neil Young. Yet at the heart of these tracks is Oberst’s signature quavering voice and those sprawling literary lyrics that have garnered him the reputation as one of the most gifted songwriters of his generation.

Initially, at age 18, Oberst made his name in the indie world under the moniker Bright Eyes when he released the lo-fi album Letting Off the Happiness. Critics swooned over his manic abandon, precocious lyrics and angelic looks. In those youthful days, he would stand on stage frantically strumming his acoustic guitar and yelping into the microphone, awing audiences with his vulnerability and desperation.

In time he refined this rawness and soon that indie attractiveness blossomed into international fame—Rolling Stone called Oberst a “true American original.” Soon he began selling out places like NYC’s Town Hall and sharing the stage with Bruce Springsteen and other world-renowned troubadours. For a kid that started off in his parents’ basement dabbling on his father’s four-track, it became apparent that Oberst had made the grade. During the 20 years that followed, the absurdly prolific artist would go on to front 6 different bands and drop a new album almost yearly.

Each release demonstrated Oberst’s willingness to make songs for the sake of art, holding true to his distinct vision and sound. His songs were political and personal, folk and electronic, but his singular, earnest voice was always at the core.

On this latest LP, his first major-label release (Nonesuch Records), Oberst linked up with multi-instrumentalist/producer Jonathan Wilson. The duo headed down to Nashville’s Blackbird Studio to record what would become arguably Oberst’s most sophisticated production to date.

According to the singer, the recording sessions were relaxed. The album was also filled out by a string of musicians, including the celebrated Swedish sibling duo First Aid Kit. Despite the album’s familiar country kick, braced by robust horns and twangy guitars, Oberst’s lyrical content remains decidedly intimate for the genre. The songs often navigate themes of isolation, loneliness and regret. Yet Oberst sounds more confident than ever while delivering his melancholic message.

On a break from a recording session with his politically charged band Desaparecidos, Oberst called in for a casual but reflective interview. He sounded like an old friend, thoughtfully chatting about his first major-label release, his songwriting process and why he’d want to be a zookeeper if he wasn’t a songwriter.

“There is not enough music in the music industry.” -Conor Oberst

Pulse: Jonathan Wilson has worked with many exceptional American musicians, why did you decide to bring him on for this album?
Conor Oberst: I actually tried out a few different producers. But immediately Jonathan and I had a good rapport. I guess the main reason was that there was something natural about being in the studio with him. He could communicate really well and had a great way of realizing my ideas. In the past, I’ve always made records with people I knew. It was nice to step outside of that for a bit. 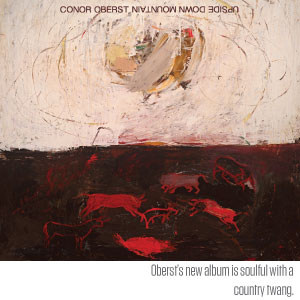 Pulse: How was the aesthetic established for the writing and recording of this album?
CO: The writing process starts with a vocal melody over some chords. Once I have a concrete melody then I start to write the words. I always think once the song exists then it’s like walking into a closet—you can dress it up a million different ways. Folk songs are just some chords, words and melody. How you actually arrange them is how you distinguish the work. But for this record, I knew I wanted to make something that felt personal, similar to the approach of my earlier records. Jonathan produced it and he can play every instrument so well. He had a lot to do with how the record sounds, but we didn’t fuss over every little sound. We were interested in getting the emotion and the feel right.

Pulse: How do you think your fans will respond to a record on a major label?
CO: I don’t know how people will respond… but for this record, I was excited to work with Nonesuch. Their discography is awesome with Bjork, Wilco and David Byrne. They are true music lovers and explorers over there and I was very flattered they wanted to work with me.

Pulse: You’re considered one of the most gifted lyric writers of your generation. What is your process like?
CO: I guess it is an attempt to find clarity. I walk around with my head in the clouds. I’m a scatterbrain. If I find clarity in a set of words then I feel that’s what I achieved. I often write more than I need to for a song. It usually comes down to editing. If you have six verses for a song then at a certain point you have to cut some of it. Everything is filtered through my conscience, my worldview, but it’s not an attempt to convey the details of my life. It’s something more universal that people can relate to, hopefully.

Pulse: How does a minimalist folk songwriter like you fit in the music discussion that’s happening now?
CO: It’s hard to say. There’s so much multiplicity in music, I can only speak to my tastes. I don’t subscribe to a particular music genre. I can say there’s not enough music in the music industry. So much is motivated by economics.

Pulse: You’ve been making songs for two decades, what’s changed?
CO: I hope there’s been some growth. Everything I’ve done from the beginning has been trial and error. You can’t really study to have my job. You’ve just got to do it. I always say if you want to be a songwriter then just try to make stuff. Some of the stuff you will be embarrassed by. I think they say it takes 10,000 hours to become good at your craft. Well, I don’t know how good I am, but I’ve been doing this long enough to know this is the only thing I’m going to do.

Pulse: If you weren’t a songwriter what would you be?
CO: Wow. I don’t know. Maybe I’d be a veterinarian or a zookeeper. I like animals a lot more than people.