Exposed: Eadweard Muybridge and the Study of Motion

In 1872, American railroad magnate Leland Stanford was determined to solve the mystery of whether or not a horse at full gallop left the ground completely—something imperceptible to the human eye. He hired English photographer Eadweard Muybridge to find out and time-lapse photography was born. Once the equine mystery was solved (answer: yes) Muybridge used his complex multi-camera rigs to parse out in microsecond increments such kinetic movements as spear throwing and putting on a shawl. Heckscher Museum is displaying an assortment of these collotype photographs from a collection of over 100,000.

Exposed: Eadweard Muybridge and the Study of Motion will be showing from May 3rd–August 3rd at Heckscher Museum in Huntington. (631) 351-3250, heckscher.org

Esteban Vicente: In the Company of Friends 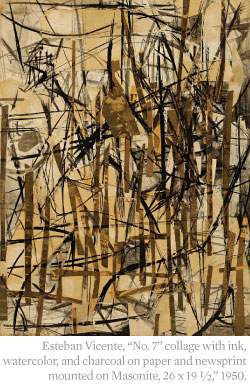 At Parrish, the enviable Abstract Expressionism Shangri-La of the East End, works from New York School icon Esteban Vicente join those of his lauded colleagues. Classically educated in his native Spain, the 1936 civil war brought him to the area, where his reverence for the old masters gave way to a lyrical colorist technique. But his canvases of vivid, emotional hues are just part of an oeuvre that includes abstract charcoals on paper as well as collages and lighthearted scrap-wood sculptures. Pieces by his contemporaries and protégés, including Robert Motherwell and Chuck Close, comprise the titular “friends.”

Esteban Vicente: In the Company of Friends will be on display until October 26th at Parrish Art Museum in Water Mill. (631) 283-2118, parrishart.org.