Standing tall on Eaton’s Neck is a 216-year-old lighthouse that acted as a warning beacon long before it became part of the United States Coast Guard base. At another edge of the five-acre property is a shed that shelters a more modern bit of history: A red kayak from the biblical Noah, given to a Coast Guard team after they saved him. Actually it was Russell Crowe (not Noah) who got lost in nearby Huntington Harbor while on Long Island filming a movie about the man and his ark. He was found by a Coast Guard boat out of Eaton’s Neck and later invited the crew to watch him perform. He gave them the autographed kayak.

The history of Coast Guard activities across the Island is filled with similar variety and adventure. In Prohibition years their boats on the South Shore chased rumrunners. During World War II a Coast Guardsman in Amagansett discovered Nazi saboteurs who had landed on the beach there from a German submarine and helped foil their mission. In 1996, they aided in the search and recovery operation after the tragic crash of TWA flight 800 near East Moriches. And since 2003, the Coast Guard has been part of the Department of Homeland Security—though they don’t talk much about their activities in that sector.

“The Coast Guard provides security and is responsible for anti-sabotage and anti-terrorism in the nation’s ports,” said Christopher B. Havern, a staff historian in the Coast Guard Historian’s Office in Washington, DC. “I’m not aware of—or not at liberty to say—if there are any homeland security issues on Long Island.” Coast Guard stations do have machine guns that they can mount on their boats, said Mark Stauffer, commanding officer at Eaton’s Neck. They also have shotguns, rifles and sidearms that they might carry for more routine matters like law enforcement or boarding recreational boats to check equipment. You never know about those recreational boaters, he said, although “99.9 percent are happy-go-lucky, just wanting to have fun.” 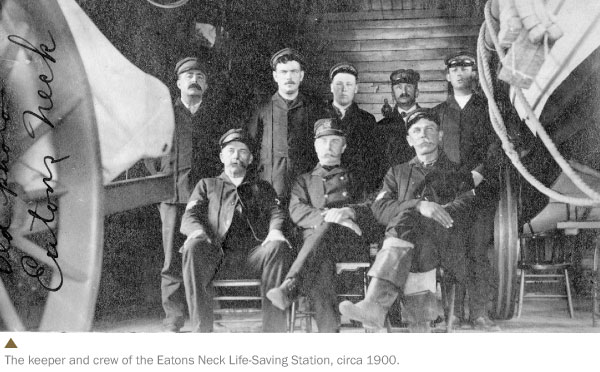 Many people don’t know, or forget, that the Coast Guard has long been a branch of the Armed Services, said Havern, a Malverne native. During the War of 1812, the US Revenue Cutter Eagle engaged the British 18-gun brig HMS Dispatch off the northern coast of the Island. “They were heavily outgunned,” said Havern about the Eagle. Its captain, Frederick Lee, “decided to beach the vessel and continue the fight on land, from the top of a hill.” That was near Port Jefferson. The Americans ran out of cannonballs and reused some that the British fired. They ripped up their ship’s log to use as wadding. After a day of combat, they refloated the Eagle but were captured soon afterward. In 1915, the Coast Guard was unified when the Revenue Cutter Service, which was started to enforce customs laws, was merged with the Life-Saving Service.

During World War II the stations along the Island’s coastlines conducted regular beach patrols. That was how Seaman John C. Cullen of the Amagansett station encountered four men who claimed to be fishermen but whose story sounded fishy—especially after one of them shouted something in German. They offered him $300 to keep quiet, which he took as evidence and ran back to the station to report them. They and another four Germans, who landed a U-boat in Florida, were soon captured, prosecuted and found guilty. The German plot to blow up rail facilities and war-industry plants was foiled.

The Coast Guard was, like the rest of the Armed Services, only experimenting with integration during the 1940s. On Tiana Beach in East Quogue, the station had an all African-American staff from 1942 to 1944. The site, recently the Neptune Beach Club, was purchased by the Town of Southampton this past December with plans to create a museum commemorating its African-American past. In 1943, the USS Sea Cloud led the way by totally integrating its crew. It included African-American artist Jacob Lawrence who painted scenes of the Coast Guard life. 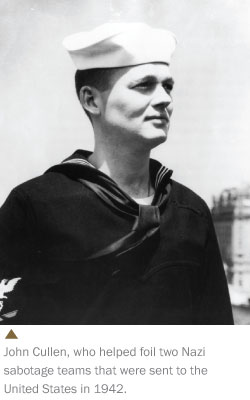 Before those wartime incidents, the Coast Guard fought a different kind of war on Long Island—against the rumrunners on fast boats who brought bootleg liquor to shore from larger ships that stayed out in the ocean during the years of Prohibition. Fred Scopinich, now 86, grew up in Freeport where his father and uncle ran a boatyard. They had a contract in 1926 to build 15 boats for the Coast Guard. “But my father made rumrunning boats too, on the other side of the yard. Naturally, the rumrunners’ were faster—10 miles an hour faster and they kept increasing their horsepower, while the Coast Guard kept trying to keep up,” said Scopinich. The Coast Guard was hampered because their designs required approvals. “Freeport was a hotspot for rumrunning because it is close to the city and has lots of inlets to hide in,” said Scopinich, who later opened his own boatyard in East Quogue.

Once some rumrunners came to his father’s house in the middle of the night and told him their boat needed to be hauled out. “He put the railway tracks in the water” to guide the boat out, “and then a Coast Guard boat came half an hour later with searchlights, looking for a rumrunning boat they had been chasing. They passed by the one on the railway. They thought that couldn’t be it.” Then a truck sent by the rumrunners came in to unload the illegal liquor stashed on the boat. “They told my father to go home and gave him a few dollars—quite a few dollars.”

Due in large part to better technology, there are fewer stations today—only Kings Point, Jones Beach, Eaton’s Neck, Fire Island, Montauk, Shinnecock and East Moriches (a sub-unit of Shinnecock) remain operational. And day-to-day life on Coast Guard stations is generally much more mundane. They get help from many quarters, said Stauffer, including local fire departments, bay constables and marine patrols, as well as the volunteer Coast Guard Auxiliary. They tow stranded boaters and enforce environmental and safety regulations. Eaton’s Neck even has a tennis court and a canine mascot, Nate, named after Petty Officer Nathan Bruckenthal who was killed in Iraq in 2004, the first Coast Guardsman to die in combat since Vietnam.

With a 25-foot boat and two 45-footers (pushed by water jets rather than propellers and operated by joy sticks), Eaton’s Neck personnel patrol the waters from Mount Sinai to Matinecock and occasionally rescue people who fall into the water or get lost. Like this one guy who identified himself as Russell after calling out for help. He was lost in the dark in Lloyd Neck after starting out in Cold Spring Harbor. It took Petty Officer Seth Pritt, a native of Lynchburg, VA, a little while to realize it was Oscar winner Russell Crowe. Pritt and two other Coast Guardsmen deposited Crowe and his friend at a marina in Huntington Harbor. The servicemen later watched Crowe do an underwater scene in a tank at the set in Upper Brookville. Crowe’s costume, Pritt said, “looked like a bunch of rags to me.” Nevertheless, the whole experience was memorable. “It was fun,” he said, “It was a cool thing to tell the family about.”