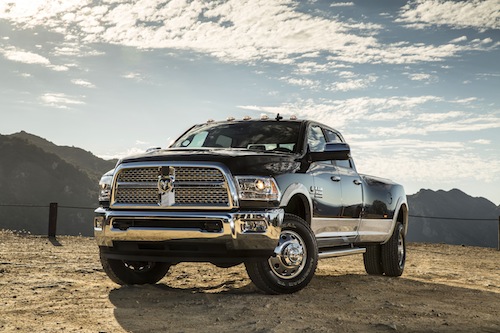 The Dodge Ram was voted “the most dangerous vehicle in America” two years ago, which to me is like saying, “Run right out and get one.” Not that I’m anxious to do anything dangerous. I just like big trucks, have test-driven most of them, and wanted to know what was so particularly hazardous about this one.

A week later, there I was, negotiating this great big slab o’ truck over hill and dale and streets and highways of Nassau and parts of Suffolk. My test truck had two wheels in the front and four in the back, making it the fattest ride I’ve ever negotiated. And negotiate one must – trying to parallel park this thing requires a significant investment of concentration, patience, constant monitoring of its back-up warning system and the kindness of strangers, who were more than happy to assist whether I asked for help or not.

My tester was outfitted with some of the most plush interior amenities you’ll ever see in a pickup including leather seating with contrasting piping, LED lighting, black burled walnut trim, chrome-ringed gauges with ultra-cool liquid graphite needles and berber carpeting.

Chrome bumpers, 17-inch polished aluminum wheels and a body-colored front fascia make your exterior that much more intimidating. It’s got a Cummins diesel engine, lending it a T-Rex-ish grunt and providing 350 horsepower and 610 foot-pounds of torque, plus a turbocharger. The Cummins will cost you, though – it adds $10,790 to the base price, and other options will similarly place your truck in the realm of exotic car pricewise. But for those who lust for trucks and must have the best, though, you won’t find a much more beautiful, powerful, can-do machine for riding, towing your boat, hauling your what-have-you, and maybe just staring at it in your driveway. 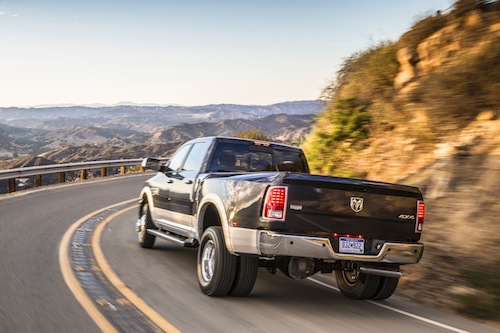 Despite its curb weight of 8,020 pounds, its handling was ballerina-like, and after a week’s drive, I can say this Ram isn’t any more dangerous than any other ride out there for sale as long as you follow the golden highway rule – “Don’t hit stuff.”