Whether we are on the cusp of an agrichemical age or already chin deep into one seems to be a point less pressing than how we will actually handle food labeling. Advocates are lining up both for and against transparency, but it seems the devil is in the details and he (it) is pulling out all the stops.

What’s the last food you put in your mouth? Where did it come from? Who gave it to you? Who prepared it? How was it processed? Who grew it? What did they put on it? Where did the seed come from? Who planted it. Was it engineered or modified from what nature intended? Who engineered it?

Unless you know the answers to all these questions and more it’s almost unavoidable that in the very recent past you’ve eaten a GMO (genetically modified organism).

Thanks to our collective cultural fetishization of food purveyors and market gardeners it’s easy to think we’re living in some sort of pastoral golden age. One in which all our produce is grown locally on organic farms where plucky anthropomorphic pigs are doted on by overly protective yet highly intelligent and cloyingly precocious arachnids. After all, Williams-Sonoma does sell a home butter kit. But this is far from the truth.

Despite the fact that there are an increasing number of highly visible tiny-scale micro producers, the agro-industrial complex grows larger by the year. For every tiny rooftop Brooklyn beekeeper, it seems 10 small-to-midsize farmers succumb to Big Ag. The giant international mega-conglomerate food corps keeps getting more mega and the legitimate small family farm continues to become more and more a relic of the Frank Capra sepia-toned past.

You’ve likely heard this line before: Monsanto is the devil. “Barack Obama,” you might shriek, “signed a bill authored by the devil himself.” It refers to the so-called “Monsanto protection act,” which was heavily influenced by agrichemical company lobbyists. The act sought to streamline FDA approval of GMO products and side-step opposition to bioengineering, but it was killed in Congress at the end of the year. GMOs might make you think of pink Technicolor rodents and beanstalks Jack would envy, but the truth about GMOs is mostly much more mundane than all that. Monsanto might be the devil though.

There’s an argument to be made that GMO foods represent significant scientific progress. If you’ve ever been to Disney’s Tomorrowland and seen the animatronic people talking about the farms of the future where crops grow in drought conditions and science wipes out world hunger, well you see where this is going.

But, are those who oppose GMOs just Luddites? Isn’t all farming and food production technology to some degree, as George Orwell pointed out in his book The Road to Wigan Pier?

“A human being is primarily a bag for putting food into; the other functions and faculties may be more godlike, but in point of time they come afterwards,” Orwell wrote. “I think it could be plausibly argued that changes of diet are more important than changes of dynasty or even of religion. The Great War, for instance, could never have happened if tinned food had not been invented. And the history of the past four hundred years in England would have been immensely different if it had not been for the introduction of root-crops and various other vegetables at the end of the Middle Ages…” 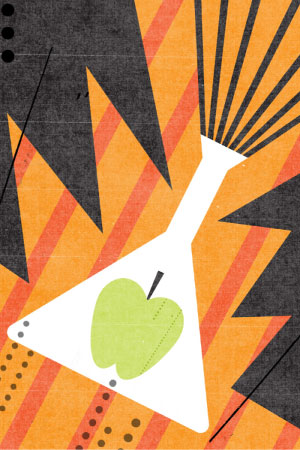 But these technologies that Orwell outlined in 1937 met with no opposition at the times of their introduction. SPAM is every bit the abomination against nature that a magenta rat is, yet better living through chemistry now faces fierce resistance even though SPAM, at the time of its popularization during WWII, was “food for victory,” keeping our GIs fed.

However, the debate before legislators and voters isn’t about whether we should or should not create a Jurassic Park of corn and soy.

The front in the fight against the devil right now is not an argument of science, or even agriculture. It’s about regulation and a bid for transparency, a seemingly sober drive to have foods containing genetically modified ingredients labeled as such. It’s about enabling consumers to make a choice about the types of agriculture they wish to support with their dollars and the types of foods they want to put into their mouths.

“The use of GMOs has spread at an alarming rate, with little or no regulation,” said Scott Chaskey, director of Quail Hill Farm in Amagansett and author of the recent book Seedtime. According to Chaskey, a labeling law is going to happen; he has testified before New York state on the subject of GMO transparency. “It’s just a matter of time. But there’s so much money on the other side.”

Big Ag famously spent tens of millions of dollars and defeated labeling ballot initiatives in California and Washington state. But an opinion poll conducted by The New York Times in 2013 showed the public is overwhelmingly behind labeling laws, with 93 percent supporting some form of labeling. The devil, as they say, is in the details. Despite the support for some sort of labeling there is widespread disagreement over exactly how it should be done. Which is why Monsanto could march into California in 2012 when GMO labeling was on the ballot and create enough confusion ($70 million worth) that not even half the voters would support prop 37. Then Monsanto did it again in Washington state.

In New York, legislative bills A.3525 and S.3835 seek to make labeling of foods for retail sale mandatory when they contain genetically modified ingredients and genetically engineered seeds. The bills, being driven by Assembly member Linda Rosenthal (D) and Senator Ken LaValle (R), are moving through the legislature, but New York faces the same battles that took place in California and Washington. “It’s David versus Goliath,” Chaskey said.

“The opposition is incredibly deep-pocketed,” said Stacie Orell, founder of GMO Free New York. “There are multiple lobbyists roaming the halls in Albany every day.”

In a memo of opposition to the Rosenthal Assembly bill signed by a coalition of agribusiness and biotech trade organizations last June, the case against labeling was made. It’s based on the three tiers that have defeated similar initiatives in the past: Labeling laws are going to bring lawsuits, science said it’s safe and it’s going to be expensive. In the case of this last point, the memo claimed that the annual grocery bill for a family of four would increase $450 to $500—a figure based on a report funded by opposition to Initiative 522 in Washington state. Still, an independent study by the non-partisan Washington State Academy of Sciences made no such claims.

Currently the industry supports voluntary labeling of GMO foods and retailer Whole Foods, for one, has pledged to have all products containing GMOs labeled by 2018. “It’s our hope that statewide initiatives such as this will lead to further transparency for shoppers and ultimately, one uniform set of federal standards regarding the labeling of genetically modified foods,” said Whole Foods spokesperson Michael Sinatra.

Proponents of GMO transparency would like a federal regulation mandating coherent labeling, which is common in Europe. Currently at least 20 states, most of them on the coasts, have some form of labeling legislation in the works. With the exception of Vermont, most of the northeastern states have triggers in place that would prevent the legislation from going into effect until surrounding states also passed similar legislation. Connecticut has passed such a “trigger” law. The utility of this is two-fold. For one, it’s more practical to have the region under similar labeling regulation so manufacturers don’t have to have different packaging for every state. Second, Monsanto has threatened to sue states that enact “unconstitutional” labeling laws. The states have to assume there’s strength in numbers.

In contrast to what is happening at the state level, federal regulation seems to be moving in the other direction. In April, Representative Mike Pompeo (R-Kansas) introduced what is somewhat misleadingly titled “The Safe and Accurate Food Labeling Act of 2014,” which has the support of biotech and agribusiness giants and is widely seen to protect their interests. (It’s worth noting Pompeo’s efforts are supported by the Koch brothers, the Republican megabackers.) Already, pro-labeling groups have derisively renamed the proposed legislation “deny Americans the right to know” act (DARK).

Ultimately these early fights over labeling set the stage for what will certainly become a pitched battle over reining in (or at least examining) the use of GMO crops. Monsanto, Big Ag and the biotech industries see this as wedge issue, one that could open the door to closer inspection of their practices. And they’ve spent a great deal to make sure that doesn’t happen. Then there are the mono-crops that GMOs make possible. These massive fields of one crop go on uninterrupted for thousands of acres, however questions abound about their impact on the ecosystem—many blame honeybee colony collapse on this practice, for example.

And many more, like Chaskey, remain skeptical about the process altogether. “The reasoning behind releasing GMOs is absurd to me. It’s using mythology to make food.”