In an instant he was airborne, in a full-blown barrel roll, after being bumped from behind at the 2012 Honda Grand Prix. His mind took off. In his racing career Ryan Tveter had been in minor incidents, but this was different. He might walk away from it. He might not.

Luckily Tveter’s vehicle landed right-side-up; his fate might have been different otherwise. The car nevertheless collided with a concrete wall in reverse, bursting into flames on impact. Through a plume of smoke Tveter climbed out of the battered vehicle and ran to safety. His heart accelerated. But more than anything, Tveter was disappointed. His day was over. He’d learned plenty of lessons since first climbing into a race car and this one came the hard way. Yet it was a lesson he needed to learn.

Tveter’s far from the ordinary 20-year-old kid. An up-and-coming driver on the Formula Renault 2.0 Eurocup and Northern European Cup (NEC), the Oyster Bay resident has traveled the world in pursuit of his dream—becoming a Formula 1 champion, the highest class of single-seat auto racing worldwide. “It’s what I’ve wanted to do for as long as I can remember,” Tveter said.

An engineering major at Lehigh University a year ago, he opted to forgo (or at least postpone) what many consider a normal chronology of events—the campus experience, dorm life and eventually an office job with a regular paycheck. The only American in Formula Renault 2.0 Eurocup and NEC, the Josef Kaufman Racing team member has enjoyed great highs, like placing fourth and fifth in two races at Belgium’s Circuit de Spa-Francorchamps last July. And lows, like making mistakes that have cost him position. This, in a sport in which first and last are separated by mere seconds.

After competing domestically for two years, his first season overseas was a successful one. It culminated with a strong showing in the circuit’s final stop in October, Zandvoort, Netherlands, to finish 9th overall in a field of more than 40 NEC drivers. He also earned a wild-card invitation to 2 Eurocup Formula Renault 2.0 events in Hungary at season’s end. “When there is just over a second separating an entire field of 36 cars you have to work really hard to gain any position,” he said. “Having the speed to catch up to another driver doesn’t mean it will be easy to get past them.” 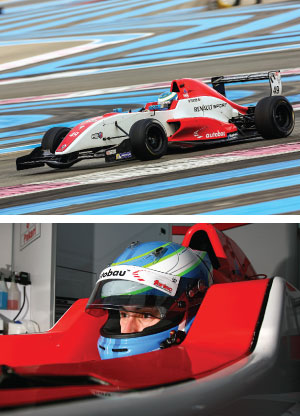 Although relatively new to racing, Tveter’s passion for the sport took root long ago when his mother brought him to a few car shows when the family lived in London.

He was hooked, becoming obsessed with cars from bumper to bumper and even more so, racing. “I had F1 posters in my room, read all the car magazines, watched all the car shows and played racing video games,” Tveter said. “I would get up early in the morning and watch whatever races I could online.”

There are legions of fans worldwide but only a select group of drivers, many of whom began their careers racing go-carts as early as age five. Tveter however, didn’t have the opportunity, having moved with his family throughout his childhood—the US, Austria, the UK and Switzerland. He’d been settled just long enough in Oyster Bay to catch his big break. It came when a high school classmate at Choate Rosemary Hall in Connecticut connected him with a team owner in Canada. “I somehow convinced him to give me a test.” That came in February 2011 in Texas, “in the middle of a field, in the middle of nowhere.” Throttle position, brake pressure, coming back into the pits, Tveter had watched countless races and read about the tactics and physics behind it, but had never actually applied his knowledge.

Tveter climbed in and held on. He showed uncanny ability and undeniable desire and was invited back for four more days of trials. A quick learner, his times dropped with each lap in the car. As a result Tveter was asked to join the team and was put on the fast track, literally and figuratively. With race day four short months away, he immersed himself in all aspects of his training. That June Tveter made his competitive debut in front of more than 100,000 fans at the Montreal Formula 1 course. In his first time on a track with other cars, he finished 10th out of 44. The rest of the season he ranked as high as eighth.

Stepping up to the Star Mazda Series in 2012, the success continued with multiple top 10 finishes. As for incidents like that barrel roll in St. Petersburg, it’s all part of the deal—he had already come to grips with the perils. “For every racing driver it can be scary, but you need to learn how to deal with it because that will make the difference between the guy who starts on the pole [position] and the guy who doesn’t,” Tveter said.

He’ll spend another season at the NEC level, but not before a productive offseason in which he’ll continue to study the sport, stay lean and build muscle.

“Most people don’t realize that these cars are not easy to drive—there’s no power steering, you’re sitting in a small space and you have to be able to hold your neck up with five to six Gs of longitudinal force,” Tveter said. “F1 drivers are the most physically fit drivers in the world. You have to have a really strong neck, arms and legs and be able to withstand the heat, all while staying focused on operating the car.”

With each step up in class comes a bigger engine, bigger tires and tougher competition. At his current level Tveter will reach 160 miles per hour on straightaways and low triple-digits around turns. By contrast, reigning F1 champ Sebastian Vettel won the Italian Grand Prix averaging 145 mph.

The higher one goes, the higher the stakes as well; Vettel made more than $18 million since June. The F1 circuit takes drivers everywhere from Melbourne and Shanghai to Montreal and São Paulo. Tveter has a four- or five-year plan to reach F1.

“For me, it’s about proving to myself that I can do it,” Tveter said. “My goal is not just to make F1 but to be a champion when I get there. It’s an international sport that has global influence. I really believe in helping others and in making it to Formula 1 I could promote good causes and hopefully make a big change in the world.” Earlier this year Tveter finished third in the Dan Higgins Trophy race at New Zealand’s Manfeild Park in the Toyota Racing Series. He finished just 0.546 of a second off the fastest qualifier time of the first qualifying session and 0.127 of a second off the second qualifying session.

“It’s surreal in a sense,” he continued. “I knew racing would always be what I ended up doing with my life. There’s nothing that makes me happier.”

Need for speed? Formula 1 comes to Austin (TX) this November. Or see it in Monaco later this month.