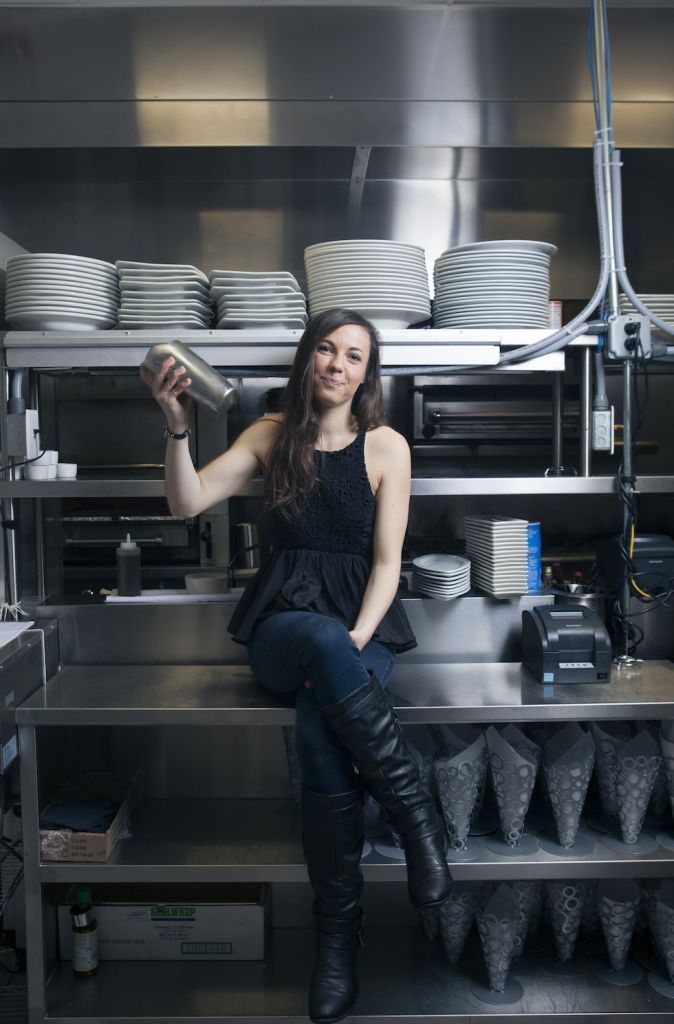 Long Island Pulse: What’s new at Revel?
Jessica Liberto: As soon as I got here my manager Andreas [Handrinos] and I worked like crazy to revamp the cocktail menu. I suggested certain things, like changing our signature martini by swapping CÎROC Coconut, which tasted too synthetic, with plain vodka, fresh coconut purée and coconut pieces. Garden City is a vodka town, but I wanted to stay ahead of the curve, so the new menu features a lot of brown spirits. A lot of people are scared of whiskey, so you’ll see some fruitier cocktails using lighter whiskeys—stuff like Basil Hayden’s and Widow Jane from Brooklyn, which people like because it’s cut with New York water—and infusions with mixed berries, watermelon, cherries, figs or coffee beans.

Pulse: Is the new menu all whiskey?
JL: No. We’ll have an appletini, but with absinthe. You don’t see many cocktails with absinthe—though in the city, bars like Apotheke are dedicated to it—because it’s so hard to work with. It has this bold, black licorice taste.

Pulse: You mentioned your manager earlier…
JL: Yes. Andreas. For this menu, we made our first bitters with blue lavender, coriander, cinnamon sticks and star anise. We’re also experimenting with some molecular mixology.

Pulse: Which is…
JL: Taking what you know in one matter or form and changing its basic structure—like a shot that’s eaten instead of being sipped from a glass. We’re doing mojito spheres. You make the mojito then add sodium alginate and drop it in a water bath with calcium chloride. You use a dropper for caviar-style bubbles or a silicon mold for a larger sphere. The interaction makes a membrane—a mojito bubble with a liquid center. It’s tricky, but fun.

Pulse: Why is it tricky?
JL: It takes a lot of time. I’ve also been working on an Old Fashioned, but as a two-level spherical edible. Bourbon is the outside sphere and a mix of muddled cherry, sugar and bitters is the inside. We have to make the inside bubble first, let it settle and then drop it in the bourbon-alginate solution to make a bubble inside a bubble. The problem is that the bubbles need to set for a few hours, but they also start to degrade. It’s all timing. Unexpected flavors and textures keep you guessing what’s next. That’s what we want.