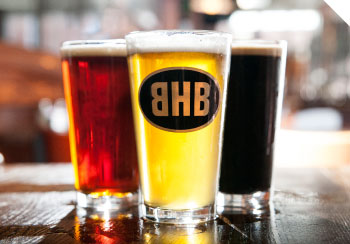 After launching Driftwood Ale in 12-ounce cans in March, Montauk Brewing has followed with the canning of Summer Ale. The apple juice-colored beer “has more of a backbone than most summer ales because we used caramel malt,” said Eric Moss, co-owner and brewmaster. “It’s still a really light, citrusy and refreshing beer, though.”

Montauk, which presently outsources production to Garrattsville, New York’s Butternuts Beer & Ale and Westminster, Massachusetts’ Wachusetts Brewing, has also started building a seven-barrel brewery…in Montauk! “This has been the plan all along, but it took a lot longer than we figured,” said co-owner Vaughan Cutillo. “We’ve already ripped up the floors in the back of the tasting room and did the footings, columns, steel beams and a concrete deck with drains. We’re hoping to start brewing our own beer by the fall or winter.”

What To Know: As Patchogue continues to morph into a destination for beer-based awesomeness, BrickHouse has undergone the awesomest transformation. I previously branded the brewpub as subdued and stale, visiting only rarely to consume older recipes. But the 2013-formed duo of Arthur Zimmerman and Paul Komsic—brewmaster and brewer, respectively—are injecting beers with intrigue. “I know our old reputation,” said Komsic, “and this is all an attempt to change the thought that we have the same beers here day after day.” BrickHouse has also started distributing to outside businesses, including Morrison’s in Plainview. “Every month you’ll see at least two new beers,” added Zimmerman. “We want people to say, ‘Whoa, BrickHouse is making that?’”

What To Drink: A crew of new Belgian-style brews: Veronus, a bready, raisin-y ale with rye malt and caraway seed; Walter Witbier, a nod to Breaking Bad; and Hi-Ho Belgian Pale Ale, packed with hibiscus and honey. The latter is a collaboration with the Long Island chapter of Girls’ Pint Out, a national craft beer organization for woman.

“We had about 20 members help us brew the beer and we explained the brewing process,” Komsic said. “We’re also donating a portion of each sale to the group’s Pink Boots Society scholarships.”

Also Try: Carrackfergus Cream Ale, aged with Jameson-soaked oak and nitrogenized. It smoothly swirls with flavors of butterscotch, vanilla, corn and whiskey. Nitro Boom Stout, though originally from BrickHouse’s pre-transformation era, now has a new identity. “We removed a lot of roasted malt and added chocolate malt and oats,” Zimmerman said. “The taste was almost too astringent, like bad coffee. The customers love the new version. It’s much more rich and chocolatey.”

What To Know: A wood-walled shrine to barbecue—patrons can worship with heaps of Texas-style ribs, pork and brisket—from the owners of Amagansett’s La Fondita and East Hampton’s Rowdy Hall and Nick & Toni’s. I also genuflect to Townline’s seven-draft lineup, featuring Montauk Brewing and Southampton Publick House.

What To Drink: I always opt for the IPA’ndle, a rotating draft dedicated to IPAs. The style is perfect for Townline’s meat-heavy menu. “The bitterness cuts right through the spice and cleans the palate for the next mouthful,” said Richard Scoffier, food and beverage director. The latest IPA’ndle, Bell’s Brewery Two Hearted Ale, is crispy, fruity and floral. If you desire a stronger smack of hops, Townline has bottles of Bell’s Hopslam Ale.

Also Try: Pilsner Urquell, the style’s archetype, poured from a proprietary tap. It can produce four versions of the prickly, Czech Republic-based icon—order a sweet-tasting mug of foam, or Mliko, for a nightcap.