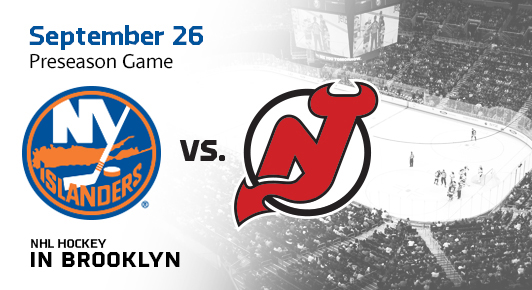 The 2015-2016 season is creeping closer and closer to a reality. Next season is the final for the New York Islanders at the Nassau Veterans Memorial Coliseum … until further notice, at least.

Like last season, the Islanders will play the Devils in a pre-season game at Barclays Center in Brooklyn. It’s set for Friday, Sept. 26. The hallways will still be dark and dull, and near claustrophobic on the upper levels, the view will still be restricted and half the stadium will be missing seats behind one of the goals. Same story, another year.

The Islanders released a fluff statement from general manager Garth Snow about the upcoming exhibition.

“We are extremely excited to play our second game at Barclays Center,” Snow said. “It was a special night, seeing all of our passionate fans pack the building last September and hearing the ‘Lets Go Islanders’ chant throughout the game. We are looking forward to making Brooklyn our home the following season. This is a great way for our fans to see how easy the commute is to this world class facility in Brooklyn, the friendly staff that awaits them as they walk through the entrance, and the numerous amenities that only Barclays Center offers.”

“How easy the commute is”?

Really, Garth? There’s nothing easy about the Long Island Rail Road. Just ask Helena Williams. An easy commute is driving on the Northern State or Southern State, getting off at the Meadowbrook and cruising into the arena parking lot in Uniondale.
According to a team release, Barclays Center and the Long Island Rail Road are coordinating to provide extended train service to accommodate the guests after the Islanders-Devils game. Last season, if you left at the beginning of the third period you had to wait more than an hour to get a train from Atlantic Terminal, which transfers at Jamaica and then back out to Long Island. It was a nightmare to say the least.

Yes, it’s an exhibition and things may change slightly for better transportation and logistics for when actual NHL regular season games begin in the fall of 2015, but it’s still not a pleasure cruise.

Plenty more to come about the move to Brooklyn over the next year. We’re just getting heated up.

McDonald selected to USA Men’s Team
In actual player news, Islanders forward Colin McDonald has been selected to the U.S. Men’s National Team that will compete at the International Ice Hockey Federation Men’s World Championships from May 9-25 in Minsk, Belarus, according to the organization. He joins teammates Matt Donovan and Brock Nelson on the national squad.