Genetically Modified Foods. They’re on the shelves of your supermarket, in your food and more and more in your news. But if you ask ten people if foods containing GMOs should be labeled you’ll likely get ten different answers.

In the May issue of Long Island Pulse John Capone explored the issues surrounding GMO labeling. So just where are GMOs labeled? Where are they banned?

Inside the United States
At least 26 states have considered some sort of GMO labeling.

Connecticut and Maine passed limited legislation. Basically, they passed laws requiring GMO food be labeled but it only goes into effect if multiple other states pass labeling requirements. So far not enough states have for their laws to be actual laws.

Out west, voter initiatives to label GMOs in both Washington State and California failed at the polls.

Alaska has a law that requires the labeling of GMO fish.

The biggest GMO labeling news just happened in Vermont where legislators recently passed a bill requiring GMO labeling. The governor is expected to sign the bill into law any day now. However, it’s also expected that the state will be sued over the law.

The map below from the Council for Agricultural Science and Technology shows where state GMO legislation stood at the end of 2013. 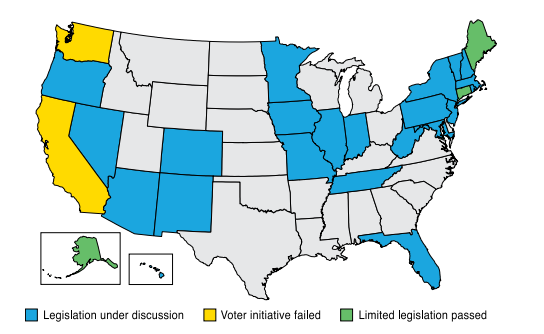 Outside the United States
Some countries have some sort of ban on genetically engineered food imports and cultivation and many more have labeling requirements. Here’s where the rest of the world stands as of September 2013, according to the Center for Food Safety.

What do you think? Should GMOs be banned or should labeling be required?