Red Zone, my monthly column, plunges palate-first into the beer-filled pool of Long Island, without the assistance of arm floatie-thingies. A magazine is structured with specific counts on words and pages, though, so occasionally, my swim is briefer than desired. This was the inspiration for Red Zone Xtra, a series revisiting establishments previously spotlighted in Red Zone, but without any limit on words. It’s a free-ballin’ cannonball into the beer-filled pool—while consuming a beer, of course. 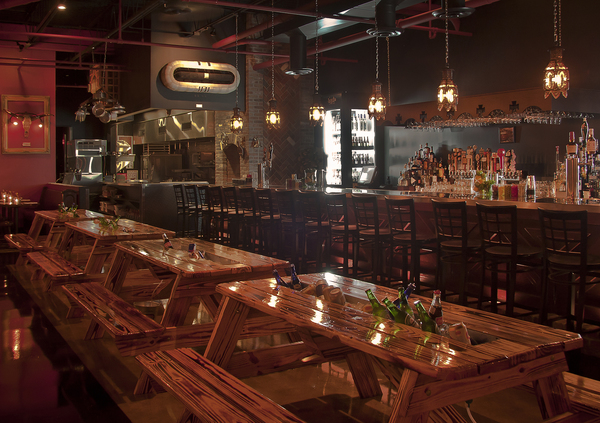 Atmosphere: Its strip-malled location, also home to 7-11 and Carvel, oozes generic and belies the interior, a mysterious, goth-industrial layout soundtracked by Slayer, Led Zeppelin, and Black Sabbath. My entrance is Metallica’s “Ride the Lightning,” which prompts a singalong and gesticulation, but the Ric Flair-esque strut is short-lived: BBD’s is jam-stuffed with humans (and reservationless). I wait and eyeball the room, noticing a chandelier erected with cookware—the grandmother’s of Ralph Perrazzo, owner and chef, specifically. I’m eventually seated at a repurposed church pew, near the chandelier. It’s fastened above a monstrous, brick-encased grill devouring charcoal and wood. The scent of burger. 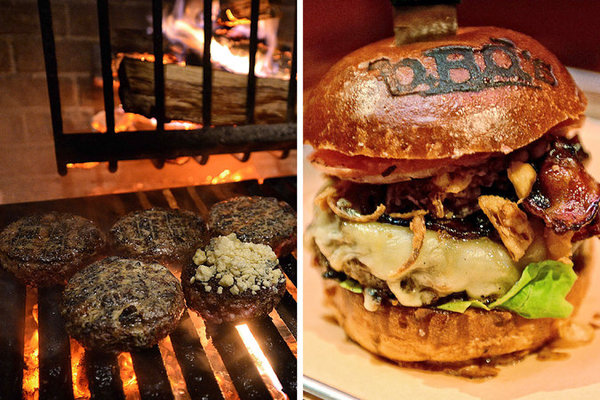 What To Know: A native of Lake Grove, Perrazzo has cooked at New York’s Jean-Gorges, Boston’s Clio, and Las Vegas’ Bradley Ogden. He butchers and grounds beef for the open-kitchened restaurant daily (“Our meat arrives whole and never sees a Cryovac bag,” he says), and prepares burgers using three methods. The popularist, according to Perrazzo, is “steakhouse,” a 12-ouncer grilled over wood and charcoal, then stuffed in a brioche bun branded with BBD’s logo. The available add-ons include scrapple and bacon jam. My favorite was the thinner, griddle-cooked patty on a potato bun—double-stacked, of course. Lisa Krommydas, my mother and partner for any burger-themed adventures, preferred the third option: steamed-over-onions, which evoked 1970s-era evenings at White Castle in Rego Park. 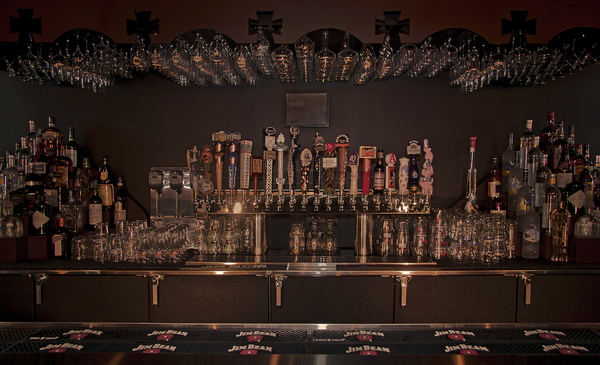 What To Drink: BBD’s rotating, 25-draft lineup is one of the best on Long Island, featuring selections from The Bruery, Bear Republic, Cigar City, Founders, and Troegs. La Trappe Quadrupel and Weihenstephaner Hefeweissbier are both mainstays, while the latter is also available with a dose of banana purèe. “I’ve seen this a lot in Germany and Germans know drinking,” Perrazzo says. “Fresh banana in a hefeweizen tastes awesome, but you can also drink a bunch, get lit, and not have a hangover. The calcium comes in handy for that.” BBD’s collection of bottles, approximately 60, is also dope, highlighted by Maine Mean Old Tom, The Bruery Rueze, and a squad of not-so-ubiquitous imports from Japan. I attacked the squad during my visit, starting with Ozeno Yukidoke IPA. This hazy, orange-yellow ale showcased aromas of grapefruit, mango, and yeast and tasted citrusy, floral, and doughy, but with restrained bitterness, lacked the hoppiness synonymous with the American-style IPA. Yukidoke was refreshing and enjoyable to pronounce, nonetheless. I followed with a draft, opting for Bear Republic’s Tartare, a delicious bomb of lemony, Warhead-esque sourness. Both were expensive, but especially the 11-ounce bottle of Yukidoke at $15. This was the only establishment serving both on Long Island, however, so personally, the pricetags are justifiable. I prefer beer rare—like my burger! [Note: This noise confirms my joke was awful.]

Also Know: If you imbibe regularly at BBD’s, Perrazzo has instructed staff to offer patrons complimentary beers from his “personal, super-private stash” (the leftest-positioned cooler behind the bar). This includes gems unavailable in New York, such as The Alchemist Heady Topper, Russian River Consecration, and Epic Big Bad Baptist Imperial Stout. “We travel to get great liquid for ourselves and sit around trying to figure out ways to downsize our hoarding issue. My bartender Tom [Beiner] travels to Vermont like every three weeks to grab a case of Heady Topper, which is an unbelievable IPA,” Perrazzo says. “It’s just another way to thank customers for the support.”