Harold Koda is the quiet force behind many designers’ greatest moments. He’s been developing eclectic, elegant, encyclopedic shows of designers, eras and styles that touch every aspect in the history of textiles and fashion.

In the society circles of New York City, there is one night where one might mistake the Metropolitan Museum of Art as the new venue hosting the Oscars. The annual Costume Institute gala draws actors, musicians, designers, moguls and lots and lots of skin. They come for the opening of an exhibit that celebrates the artistic vision of fashion. For that one night, fear of making someone’s worst dressed list is cast aside in the name of self-expression—Madonna’s 2009 “hairpiece” is still being interpreted.

Behind the glitz, glamour and power couples is Harold Koda, chief curator at the Costume Institute of the Met. For months he’s been fine-tuning this year’s exhibit Charles James: Beyond Fashion. While James may not be a household name today, his impact is widespread. “Dior said that [James] inspired him to do The New Look,” Koda said, which launched Christian Dior’s career. “Balenciaga said he was… the only dressmaker who has made and applied art into pure art.” When he was alive he had every fashion accolade that was possible, but when he closed his design house, his name just disappeared.

Koda, who also has developed a reputation of his own, is fortunate enough to be around to enjoy it—top designers court Koda to choose their work for the Met. While his name isn’t stitched into your jeans, Koda is perfectly suited to the task of shepherding one of the biggest nights in fashion and on Museum Mile. He is scholarly and erudite, but transmits a boundless and infectious enthusiasm for fashion. The co-author of 18 books, including 10 landmark catalogues for Met exhibitions, describes himself as “nerdy”

Koda, who has dressed mannequins and the Queen of England, arrived in New York City from his native Hawaii in the 70s. As a young man in his 20s, the art, music and fashion scenes captured him. He landed an internship at the The Met’s Costume Institute under Diana Vreeland, who spotted his potential. Seven years later he moved to the Fashion Institute of Technology’s museum where he created exhibitions like “East Village” and “Fashion and Surrealism” to critical acclaim. He returned to the Met in 1993 and 4 years on he presented themed shows like “Orientalism” and exhibitions of Vreeland and Dior.

After decades of mounting celebrated shows, Koda then stunned the fashion world by leaving it entirely. “It was,” he admitted laughingly, “a mid-life crisis.” He enrolled in Harvard’s Ph.D. Landscape Architecture program. “Despite all of this,” Koda said, gesturing around a room full of glamour, “I’m a child of the 60s. I love the idea of ecology, of having a light footprint on the earth…a different kind of life that’s more pastoral.” In 2000 the Met urged Koda to return. The lure of one of the most coveted jobs in the fashion world proved irresistible and Koda, who started as an unpaid intern, returned as chief curator to the Met’s Costume Institute.

In this exhibition, darkened, theatrically lit platforms display spectacular gowns. James created fashion that joined mathematics, architecture and sculpture into works of art. An ochre ball gown from 1948 suggests the undulating folds of the feminine form, recalling the imagery of Georgia O’Keefe. The famous Four-Leaf Clover dress, which Koda called James’ masterpiece, is adorned with black velvet shapes placed on a white satin skirt and would look right at home in a gallery of Matisse cut-outs. The understructures, with their supporting boning, resemble the skeletal designs of da Vinci’s drawings of wings. 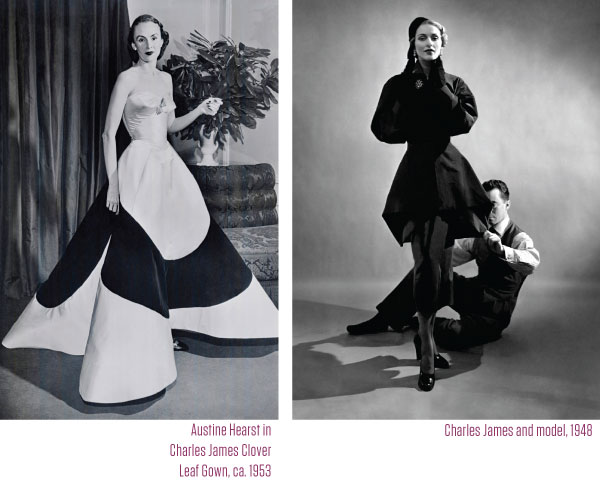 It’s a perfect time to present James’ work because of the capabilities of the brand new Anna Wintour Costume Center. Two new galleries and the latest technologies inspired Koda to break new creative ground. He worked with architects to employ x-rays, animations and even robotic arms wielding cameras to give visitors a glimpse behind the stitching. “It’s only when you examine the way [James] constructed these gowns you see that he was kind of mad genius-esque,” Koda explained, adding there’s “a camera that does a very naughty invasive thing going under the skirt so that you can see.”

In a world of larger-than-life personalities, Koda seems to be an enigma. “When I scream at someone,” he said “They come back to the room as if I didn’t say anything, so it’s very, very quiet…with James, it was an explosion. He would attack people with scissors. He was wild. If it had to do with this work, he wanted it done perfectly…as a curator, I want to go towards perfection. But I’m a believer that things should be as they are, so if it can’t be perfection, that’s okay.”

Forty years of moving fashion forward have given Harold Koda the perspective that fashion is “the carrier of very rich narratives in a variety of ways—political, social, economic…I think the only time fashion doesn’t work is when it’s communicating something about yourself that you don’t intend.” Koda said, “In fashion, comfort and confidence are the main points of projecting beauty.”

SEE IT:
Charles James: Beyond Fashion
Approximately 65 dresses and gowns presented in 2 galleries at the Metropolitan Museum of Art in the most comprehensive exhibition ever presented of America’s first couturier and one of the most daring designers of the 20th century. Through August 10.

photo of charles james and model by cecil beaton, photo of austine hearst courtesy of the metropolitan museum of art