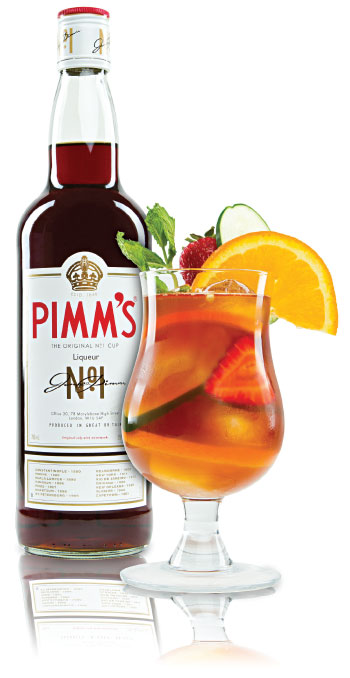 “It’s Pimm’s o’clock!” This sprightly British dandy of a cocktail is to Wimbledon and polo what the mint julep is to the Kentucky Derby—over 80,000 pints are sold to spectators over the course of the 2-week-long tennis tourney. Across the pond this posh drink owns summer and dates back to an 1820s oyster bar near the Grand Bank of England. There are variations on the classic “cup.”

Some say the “cup” refers to “fruit cup” cocktails popular in the UK at the time or to the pewter tankards that Pimm’s was originally served in. But the main ingredient is always the namesake liquor Pimm’s No.1 Cup—a gin-based spirit with quinine and spices. Mixing it with anything other than mint, cucumbers, strawberries and apples with splashes of lemonade may pop a proper Englishman’s monocle, but many modern iterations use lemon-lime soda, tonic water or even ginger beer and sometimes fruits like pineapple or orange. However it’s treated, this London transplant is a fruity, tangy tipple that will be a delightful accompaniment to the thwack of mallets at polo matches or catching Wimbledon on the telly this summer.

Add ice to a chilled tall glass. Add the Pimm’s and lemonade. Stir gently and garnish with mint sprig and slices of cucumber, strawberry and apple.