Island life takes a variety of forms, none of them involve rushing. In the Cook Islands, hushing is a more common practice and “expressway” refers to the shortest stroll from the villa to the ocean. Here, there are no tolls, only atolls.

Rarely talked about, even less frequently visited, the Cook Islands bring to life all the stereotypes of a South Pacific paradise—or at least a Broadway musical set in one. But thankfully, they also take visitors beyond cliché into a thoroughly rewarding vacation. The big, blue ocean dominates life now as it has for centuries, only instead of the local economy being based on what can be taken out of the water (delicious seafood and valuable pearls) it now depends mainly on what can be put into it (fortunate travelers).

Situated between Samoa and Tahiti, the Cooks constitute a sovereign country in free association with New Zealand, which means the locals have the best of two worlds. All Cook Islanders are citizens of New Zealand, sharing that country’s ethos of honesty and integrity in daily life as well as its English language and briskly dry sense of “humour.” Cook Islanders are engagingly hospitable people doing a good job of moving forward into the 21st century while not forgetting the traditions of past eras with regard to culture, language and business practices. Foremost among the latter is the islanders’ respect for the world around them; this is a place where nature and humans exist as allies rather than adversaries. 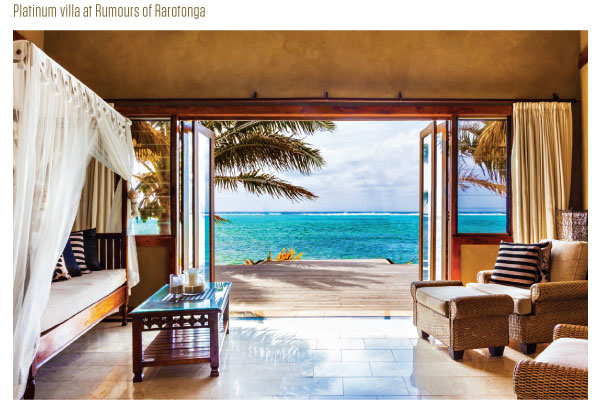 The Aitutaki Lagoon
Gorgeous both above and below the water, the arrowhead-shaped Aitutaki lagoon is the Cook Islands’ top attraction. A picture-perfect lagoon encircled by 15 islets varying in size from small to minuscule, Aitutaki is the classic postcard of a South Pacific paradise right down to the refreshing absence of tourists beyond a number that can be counted on two hands. The largest of the small is the island that gives the lagoon its name; others have such charmingly appealing monikers as One Foot Island and Honeymoon Island, and their shallow waters and swift breezes serve as catnip to kite surfers. Of course most visitors to the Cook Islands do not choose to soar above the whitecaps strapped to a gigantic kite, but these reasonable folks are always able to amuse themselves by diving, snorkeling, fishing or just relaxing beside the beautiful turquoise water.

Culture Club
Complementing Aitutaki’s marine attractions are their terrestrial counterparts. Even non-denominational visitors will enjoy Sunday morning services at Cook Islands Christian Church, where the congregation’s euphonious singing resonates throughout the structure (built in 1828, CICC is the oldest church in the islands). Local historian and preservationist Ngaa Kitai Taria, owner of Aitutaki Culture Punarei Tours, offers insightful excursions into local Cook Islands’ Maori culture. Singlehandedly redressing a prevailing inattention to local history, Mr. Taria explains life as it existed before the havoc wrought by 19th century missionaries, who took it upon themselves to change, forbid or otherwise discourage local customs to suit their own goals. Mr. Taria—in the Cook Islands it is rude to refer to someone by name without it being preceded by a polite form of address—is helping islanders rediscover the common sense of their ancestors in maintaining a balance with the island’s fragile ecosystem. It is in large part due to his dedication to the preservation of the past that visitors nowadays can see Maori sacred grounds, the marae, which were previously lost to the forest. 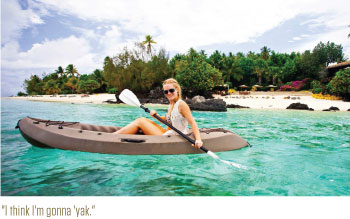 A morning tour begins with a thorough explanation of Cook Islands Maori life and an anecdote about how the stone monuments, now easily visited, were unknown for decades to local adults even while they remained a favorite place for childhood games. Mr. Taria came to know of their existence as a wee-one bounding over what seemed to be vine-covered boulders. He returned as an adult and spent several years helping to uncover the marae by hand to avoid damaging the overgrown artifacts. The cultural tour ends with an umu lunch cooked in traditional earth ovens covered by hibiscus leaves that impart their own nutty flavor into the food.

From Eating To Dining
Though the cultures of the South Pacific are not generally renowned for their culinary expertise, the Cook Islands lives up to its name nowhere more than at Café Tupuna’s, a small and highly personal restaurant where food is exquisitely prepared by owner Tupuna and her staff. The casual atmosphere of the open-air dining room and lush garden belie the sophistication of flavor combinations emanating from the kitchen. Utilizing the fresh ingredients that form the basis of local cuisine, Miss Tupuna is most famous for her curries and chili-lime fish, but an array of other tempting dishes is regularly featured on the rotating menu. The overall experience here is not as earthy as an umu lunch, where large banana leaves are used as plates, but it is still fun to see the faces of other patrons as they take the first bite of what is to many of them a flurry of new food sensations.

Eating on Aitutaki is also fun on the beach at Pacific Resort, where feet enjoy the sand while mouths enjoy the sandwiches, fresh salads, ceviche and extraordinarily delicious coconut cake for dessert. As in other isolated destinations where contemporary travelers expect culinary nirvana, local efforts to take visitors’ palates beyond boiled taro root are paying off. Previously the most common presentation of taro—a South Pacific staple—was a glutinous white purée. But these days taro is being dressed up in guises ranging from spiced chips to poultry stuffing and even sweet pudding.

Medicine In Bloom
Both in the kitchen and out, leaves, flowers and plants play important roles in local life. The Cook Islands’ history of traditional medicine continues in modern-day society and now extends to more generic health products rather than just medical applications. The Secret Garden is a great place to gain insight into the importance and value, both cultural and economic, of plants in Cook Island culture. The Secret Garden is the work of Swiss Bill Tschan, a decades-long resident of Aitutaki who has cultivated a huge assortment of botanical specimens. Stringent regulation of the importation of plants obliged Mr. Tschan to grow every single plant and tree in The Secret Garden from seeds. An authority on the use of botanical remedies to combat illnesses, Mr. Tschan is a walking encyclopedia of knowledge. He suggests, for example, placing a few soursop leaves under the pillow as a cure for insomnia.

Sleeping In Style
It can be a revelation for some people to discover just how well they can sleep in the hush of silence (even without soursop leaves). Pacific Resort Aitutaki, a member of Small Luxury Hotels, offers sumptuous accommodations in a fine setting at the edge of the lagoon. Happily, the resort reaches the level of comfort and service expected by demanding travelers. Spacious villas with separate living and sleeping rooms suit the location admirably; showers are similarly large and built to be enjoyed à deux.

A favorite among titans of industry and entertainment, Rumours of Rarotonga is the place where artistic types from Hollywood and London come looking for peace and quiet. A small ensemble of individual villas set in their own gardens with pools, Rumours’ discreet street presence gives little indication of the superb accommodations and exceptional service within.

Rumours’ villas are private homes away from home, with two bedrooms, two bathrooms and a spacious central living room graced by an indoor waterwall, plus a fully equipped kitchen that need never be used by guests who prefer to employ the services of a private chef. In the Beachfront Platinum Villa, a smart design provides both sunny and shaded outdoor areas any time of the day. The garden’s waterfall into the pool provides a relaxing sonic respite—the only sirens here emerge from the sea, even then only during a peaceful night’s tropical dreaming. The Beachfront Platinum Villa’s screening room makes for an enjoyable place to rest up between kayaking on the lagoon, taking in the views from the hammock or evaluating the quality of the locally produced Matutu beer. 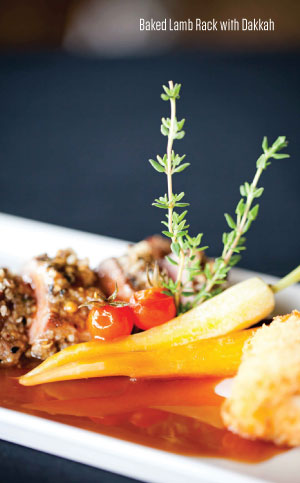 Further relaxation comes at the Rumours spa, where sublime Vichy treatments wash away any cares that weren’t already rubbed out by bodyscrubs and massages administered by expert therapists. Rumours is especially popular with a certain set of British visitors, being as far away from London’s social scene as geographically and culturally possible. Some of the West End’s most creative theatrical types come to the Cook Islands to trade the complexities of urban living for the simplicity of bare feet in the sand in order to free their minds from the congestion of Shaftsbury Avenue. Not that the Brits have the islands to themselves. Hollywood screenwriters have also discovered the quintessence of the South Pacific without sacrifice in cuisine or threadcount.

Shades Of Black
Larger than Aitutaki, Rarotonga is the country’s main island and center of commerce and government. Rarotonga has its own picturesque lagoon, this one on the island’s edge; in fact, most everything on Rarotonga is located along the island’s perimeter, its middle being left to the dense vegetation of emerald mountains looming above an aquamarine coastline. All visitors to the Cook Islands arriving by plane land at Rarotonga International Airport, it makes sense to visit the main island before or after a stay on Aitutaki.

The Punanga Nui Market is worth a look around on a Saturday morning when it is at its most bustling. Amid a congenially raucous atmosphere, everything from succulent papayas to esteemed handicrafts, stone carvings, batik prints and shiny pearls vie for attention with an ensemble of traditional musicians and dancers performing on a small stage right in the middle of the action. Music and dance are integral to Cook Island culture and can be observed more comprehensively at Te Vara Nui Cultural Village, whose tour, dinner and show offer entertaining insight into Cook Islands history.

For shoppers, the most precious Cook Islands souvenirs are the beautiful black pearls cultivated in the waters of Manihiki Island. Connoisseurs admire the deep luster and exceptional surface quality of Cook Islands black pearls, which are among the world’s rarest. Several companies create unique pieces to complement the strands of flawless specimens (they’re actually more a hematite gray than black, with yellow, green or pink undertones). Artisan Tokerau Jim creates unique jewelry by carving designs onto the surface of the pearls using dental instruments. Mr. Jim said these tools, plus immense concentration, are required to carve his abstract South Pacific motifs.

Although their name conjures up images of fine cuisine, the name Cook Islands does not come from the kitchen. They were in fact named in honor of Captain James Cook, that roving British seaman who sailed around nearly the entire Pacific Ocean from Alaska to Australia. Deeming them unworthy of a stop, the captain bypassed the Cook Islands, merely acknowledging their existence in his log without stopping to investigate. Sophisticated travelers today do not make that same mistake.

The Glamorous Coral Route
One of the most evocative sights in the Aitutaki lagoon is a vestige of the old jetty on tiny Akaiami, used by the Tasman Empire Air Line (TEAL) when Solent flying boats flew The Coral Route from Auckland to Tahiti via Suva, Apia and Aitutaki. The Coral Route was considered one of the most glamorous air routes in the world. In an age when flying was still an exclusive experience, TEAL’s Solents had only one class of service—First. On the plane’s two decks, a maximum of 45 passengers enjoyed spacious seating areas and a dining room where meals were prepared by an onboard chef. The Solents flew only a few thousand feet above the water, thus providing stunning views of the South Pacific as the aerial adventure continued with afternoon tea, lavish dinners and sightseeing at each stop. Akaiami was a morning stop where breakfast was followed by a dip in the lagoon before continuing the journey.