The German Surrealist Max Ernst may have put it best when he said, “Creativity is that marvelous capacity to grasp mutually distinct realities and draw a spark from their juxtaposition.” The process of placing one thing next to another so that contrasts are illuminated and given meaning—like the all-knowing eye of a streetlight in the dense fog—has always been a part of the New York City experience. Someone whispers a secret while a car blasts its horn in traffic; the world’s richest human being steps by a parade of hands asking for change; a child chalks a skyline on a sidewalk under a canopy of towers. Summertime in the city is no exception, and there a few atypical spots that offer a glimpse into the magic that is created when two separate worlds collide.

Manhattan Kayak Company
This is admittedly a dated notion but the last thing one thinks of when glancing at the mighty Hudson River as it purrs and rubs up against the west coast of Manhattan is what it might feel like to actually fall in. The fear for me was always that I’d go under and the toxic by-products of the bowels of the city’s monstrosity would infiltrate my pores and I would turn into Godzilla. Although much has been done in terms of environmental clean up, the shroud the 80s cast over these waters still haunts, albeit much more playfully (thankfully).

This might be what makes any kind of water sport/activity here so weirdly exhilarating. Manhattan Kayak Company has plenty of experience training novices—theirs are some of the kindest and most knowledgeable teachers in the area. That’s not to say that you won’t get a little wet while stand-up paddle boarding past the Intrepid or kayaking the epic four-hour Statue of Liberty tour. The good news is that you won’t melt—not literally anyway. Figuratively, you will become a pool of awe in the confluence of water and urban drama, especially as the sun sets and the city beside you is all aglow. And you will feel the coolest of cool in that rare selfless way that only comes when humbled by nature’s rawness and wild power. manhattankayak.com

Classic Harbor Line
There seems to be a million cruise companies around Manhattan, but one that deserves a little more attention is the Classic Harbor Line. The unique fleet offers a little something for everyone with plenty of options for folks interested in intimacy and a break from the crowds of tourists that circle the more popular destinations. Classic Harbor Line has four principal ships—two schooners and two motorized yachts. All carry a pleasantly anachronistic nostalgia and have the ability to transform anything from a serious date to a company jaunt into something else: An imaginative scavenger hunt for stellar views one has never seen or thought possible.

The ships weave through waters and showcase Lower Manhattan and Brooklyn and the United Nations and all things in between. There is a lot to see and many ways to see it. This month check out the Evening Jazz on the Manhattan series (live jazz, drinks and a little nosh), the mystical Full Moon Sail and Gay Pride Fireworks Cruise aboard the Kingston, which offers the best seat in the house for the annual Pier 54 fireworks show. Fireworks on the television is one thing, but fireworks viewed onboard a ship in New York Harbor burst the bubbles with which we surround ourselves, those little cells of limitation that attempt to convince us that there is only one way to have fun. sail-nyc.com

Hallet Nature Sanctuary
Believe it or not, there is still more to discover about Central Park. The Hallet Nature Sanctuary is a tiny 4-acre gem of a preserve that was not open to the public for close to 80 years until it became available for guided tours in 2013. Last fall the conservancy, which restored the sanctuary, began offering open houses. Now there are tours for a sublime little window of time on Tuesdays, 1–3pm. The contrasts between building and tree, man and nature abound. Indeed there is something peculiar about the way the mighty oak’s far limbs trail off into 59th Street and 5th Avenue’s residential high rises.

The space was intended to be a bird sanctuary when Robert Moses closed it off in 1934 and, as evidenced by the symphony of tunes and whistles emitting from the rambles, it still serves as such. The sanctuary, for all of its contradictions and blinding juxtapositions is remarkably gorgeous and a laboratory of sorts. The conservationists know how important it is for urbanites to have this little jewel close to home not only for education’s sake but also for the sake of beauty and balance. If New York City were a person getting ready to go out for the evening, the Hallet Nature Sanctuary would be the inimitable charm on the necklace adorning its chest—a little reminder that glitz and glamour is all for naught without the recognition of roots, earth, soil and air. centralparknyc.org 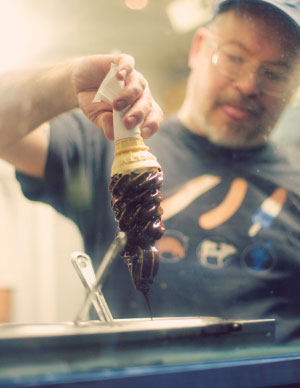 “The only emperor is the emperor of ice cream,” wrote Wallace Stevens. In honor of summer’s reminder that we should seize the day and enjoy these sublime options while in town.

Big Gay Ice Cream Shop
With names like Salty Pimp and Bea Arthur and à la carte toppings such as key lime curd, Big Gay Ice Cream has become a national hit with its first stores outside of Manhattan starting to pop up on the map, making enthusiasts of gourmet soft serve and all things local very proud. biggayicecream.com

Il Laboratorio del Gelato
If one were to do the math on what the rent must be in the Lower East Side and how many cups of gelato and sorbet one must sell to make the overhead, the results might get overwhelming. Especially if maximizing space were not a priority and were traded in for making transparent the process and allowing lines to form comfortably while sampling a growing list of 200 flavors. Overwhelming, yes, for anyone else. laboratoriodelgelato.com

Momofuku Milk Bar
It must have been late at night in front of a Commodore 64 or Atari game system when David Chang finished all the corn flakes in his bowl of cereal and looked at the remaining puddle of milk and thought, “I can change the world with this desire” and therein was born the idea for Momofuku Milk Bar. Ice cream and milk have never been the same. milkbarstore.com