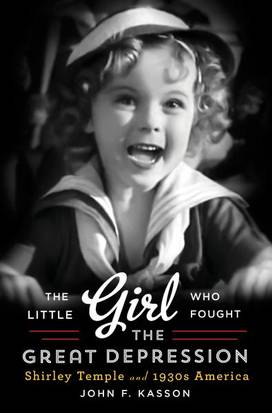 That’s what you learned when you were a year old: being vertical and walking. You mastered communication at two, played well with others at four, and by time you were six years old, you could read, write, and remember your telephone number.

So this’ll make you feel silly: at just six years old, Shirley Temple was saving the world from despair. Read all about it in “The Little Girl Who Fought the Great Depression” by John F. Kasson.
Herbert Hoover had surely enjoyed a good run of popularity.

For a decade before he was swept into the White House in 1928, he was one of America ’s most respected men. The “personal tenderness” he exhibited and his “ability to deal with calamities,” however, weren’t quite as apparent when the stock market plunged, unemployment rose, and the country began its slide into the Great Depression.

But Hoover knew what to do. He told a reporter in 1931 that the country needed “’a good, big laugh’” to make things right.

Gertrude Temple already had two sons when she “made a fateful resolution.” She decided that her third child would be a curly-haired blonde girl named Shirley, who would pull the family out of financial difficulties. When that child was born in 1928, it was as if Gertrude’s dream had “willed [Shirley Temple] into existence.”

By the time Franklin Roosevelt ousted Hoover in the 1932 election, most of the world’s citizens were truly suffering. Average American paychecks had fallen to nearly half of what they were in 1929 – that is, if the wage-earner even had a job. Unemployment was well into double-digits; worse, for southern blacks. Food was scarce, housing was iffy, and resources were dear.

Enrolled in a dance class, three-year-old Shirley Temple caught the eye of two one-reel moviemakers and was offered a contract for $10 per day of filming. It was formulaic work, but it gave her mother hope and in the fall of 1933, Gertrude made certain that Shirley was seen by the songwriter for a new Fox Film. He promptly replaced a “less winning little girl” with Shirley.

Within a year, the world was smitten…

Heavy things to put on the shoulders of a child, no? Yes, and author John F. Kasson explains why the time was ripe for a kid to become one of the world’s best-known, then-best-loved people.
But that’s not all: in “The Little Girl Who Fought the Great Depression,” we’re treated to a lively, yet focused, history filled with surprises and unique perspectives. Kasson shows us how African Americans fared, both on-screen and off. We’re told of Shirley Temple’s unusual friendships, and how she misbehaved sometimes. And Kasson offers statistics and excerpts from letters that keenly show how the Depression affected everyday people, and how Shirley Temple offered them comfort.

I came for the history that’s here, I stayed for the biography, I loved every minute of both and so will movie fans and history buffs. For them, “The Little Girl Who Fought the Great Depression” is an upstanding book.