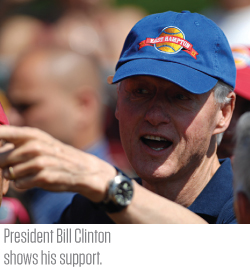 When the Artists and Writers softball game began 66 years ago in East Hampton, it was out of appreciation for the simple things in life. Legendary artists like Jackson Pollock, Willem de Kooning and Jimmy Ernst started it all, with families, picnics and bottles of booze in tow.

A few years later the writers joined in and the competition between the two creative schools got stiff. As the game has grown into an organized event attracting sponsors and considerable media attention, that rivalry has remained. When the crowds head to Herrick Park in East Hampton on Aug. 16, they’re destined not only for some serious celebrity spotting (Bill Clinton, Alec Baldwin and Christie Brinkley have made a habit of attending, and Matt Lauer’s signed on to umpire), they’re likely to see a good game as well.

“The heart of the game continues to be Leif Hope,” said Deb McEneaney, President of the Artists and Writers game. Hope, an artist, carpenter and restaurateur, has been captain of the artists’ team for decades. “He has kept it going for the last fifty years. Leif can tell if someone can play ball the moment they walk up to the plate and hold the bat.”

Maintaining the integrity of the game is important, because it cuts through the glitz and glamour that has often come to take over traditional Hamptons events. “It’s a fine line to walk,” said McEneaney. “But we keep that homespun feel to it.

The guys and ladies that come and play feel the camaraderie. And in 40 years we’ve never raised the suggested donation from ten dollars.” 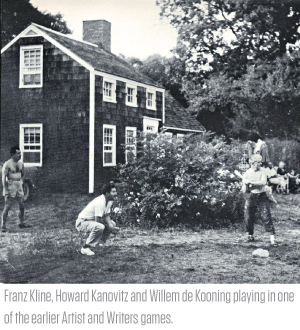 Artist Eric Ernst grew up watching his dad, Jimmy, and his friends playing in the game. He’s seen it grow from a group of family friends to a public event with wide-reaching recognition. He’ll play again this year with a new baby on the sidelines, keeping the tradition alive.

“It’s a wonderful thing,” said Ernst. “The game parallels the evolution of the community and the growth of the art world. If you walk through Green River Cemetery [in East Hampton], it’s a unique collection of artists and writers. The idea of having them all gathered in one place is a testament to the region.”

Ernst believes the game is important in that it keeps East Hampton’s small-town identity alive. In that way, it’s become more than a game.

Peruse photos of past games, read players’ reflections, watch old footage and find out about this year’s event at artistswritersgame.org.