It was late April and over 200 cars were crowded outside the Dave & Buster’s in Farmingdale. Mustangs, Civics, Subarus and Camaros revved their booming engines, leaving behind plumes of smoke and traces of hot rubber. Stereos blasted beats as cars zigzagged around the lot. A motley swarm of teens and 20-somethings ambled around jabbering about horsepower, turbo engines and slicks. Some of them strictly talked shit, looking to hustle by racing cars at impossible speeds.

“You wanna run one?” one guy asked. A cigarette dangled from his lips as he stood in front of his teal Mitsubishi Eclipse.

“Is your shit stock or what?” responded a tall, bearded guy who drove a Mustang.

“It’s pretty much out of the box. Pull up the hood, amigo. Check it. I’ll smoke you no matter what,” he said.

“You need to quit running your mouth,” Mustang answered, his voice getting more contentious. “I don’t ever lose.”

Mr. Mitsubishi lifted the hood and they began examining the guts of his shiny, blue machine, speaking in a language all their own. A crowd circled, smelling a race.

“This isn’t stock. Don’t bullshit me,” shouted Mustang, nervously stroking his beard. “I know all cars. Import cars, muscle cars… You’re not even a car guy.”

“You’re right. I’m not,” Mitsubishi said. “I’m a racer.” It was like they were reenacting a scene from some Hollywood film. Any moment the drums would start pounding and fists would fly.

One bystander introduced himself as Toby. “This is normal. It’s good for racing. It makes it more competitive.”

Toby is a 23-year-old mechanic who drives a Subaru he bought for $30,000 and spent an additional $20,000 modifying. “It’s an expensive hobby, but there’s always ways to improve your car. I work two jobs to pay for my car,” he laughed. Numbers of this kind are not uncommon amongst these enthusiasts. Most purchase a car for about $10,000 and put anywhere from an additional $10,000 to $80,000 into building and maintaining it. 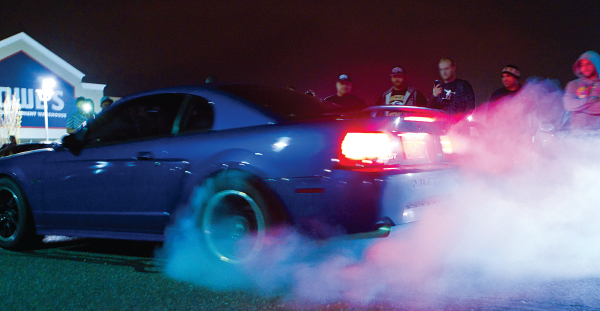 “The expense is worth it, man,” Toby said earnestly. “You can’t explain the feeling. When you’ve got that G-force pushing against you, everything bad in your life seems okay.” I was skeptical.

“What are you escaping from? What’s so bad?” I asked.

“I’m not sure,” he said. Then he changed the subject. “Let’s get this race on. Why are we wasting time?”

“Maybe, but these races run small. It’s more for the thrill of winning. I mean, the pot will get up to fifty bucks, maybe a few hundred,” Toby said. “If you want to see a real race, catch a money-run.”

Another guy, Bobby, a diesel mechanic who looked no older than 18, offhandedly mentioned that he recently took his motorcycle to 187mph on the LIE. When I asked if he was afraid while driving so fast, he replied quite romantically: “There’s no time to be afraid.”

“But you can kill someone going that fast…”

“We know. But you can’t think like that. If you’re afraid that’s when accidents happen.”

Who were these people? It only takes a blowout or an oil slick at those speeds and someone is dead. But I said nothing, simply marveling at the abandonment, the unadorned youth—so fleeting and pure.

Moments later Toby told me that a couple weeks back his “riding-buddy tore off his arm while dragging his face along the blacktop at 150mph” during a pick-up motorcycle race. His friend died, but Toby was back on the road the next day. I felt my stomach collapse. I told him I was sorry, to which he responded, “What did Paul Walker from the Fast and the Furious say? The guy who just died? ‘If I die driving fast, then I’ll die smiling.’” There was something lonely, existential in his remarks, but I think he was moving too fast to realize it.

About 40 car-lengths away, a Civic spun its tires, blanketing the lot in smoke. “That’s my favorite smell,” someone shouted. Another guy was perched on the roof of his truck, steering with his feet through the skylight. Two girls ran up, “Are we racing or what?” one giggled. “I drank two Red Bulls and vodka for this!”

“Do people drink when they race?” I asked.

“No way! They love their cars too much.”

A fine mist started to fall and some cars began to leave. The Mitsubishi/Mustang race was called off. “Rain isn’t good,” Bobby said. “It’s too dangerous to drive on.”

A few minutes later a pair of cops rolled into the lot. The remaining cars scattered. These kids seemed so brave a moment ago, now they were disappearing down the road. 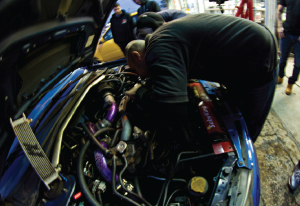 Some days later, we met again at a mechanic’s shop in Suffolk County. The silver-blue sky was cloudless with no portent of bad weather. Seven or eight kids were hanging out boasting about how they planned to soup-up their cars when they got some money.

“We live simple lives, working our asses off so we can work on our cars. I’m buried under that hood every day. But if I wasn’t doing that I’d probably be getting into trouble,” Toby said. “I’d rather buy a new engine than blow my wad on drugs or booze.”

“This is coming from a guy who can’t even afford work boots,” interrupted Michael, a 22-year-old mechanic. “But he was able to drop a ten thousand dollar motor in his car.” They all laughed and continued to exchange anecdotes about the cars they’ve totaled or the cops that chased them.

“What happens if you lose your car?” I asked.

“You fucking cry your eyes out. It’s like a death, man. You work for years on this thing and then it’s gone? I’ve lost two cars. Both totaled. And I thought I was going to give it all up. But I’m addicted,” Bobby said.

“Wouldn’t you rather race on a track where it’s safer?”

“If there was a track we’d be there every night. There used to be one in Westhampton but they shut it down because of noise complaints,” said Toby.

“We’re going to race no matter what,” Bobby continued. “So they might as well build a track and I can guarantee street racing would disappear. We’re not looking to hurt anyone. We just want to race.”

I wanted to believe him, but I wasn’t convinced that a racetrack could eclipse street racing. “What do your parents think about you driving illegally and spending all your money on your cars?” I asked.

“My dad got me into this! He’s come to a few of my races. He’s still got a muscle car that he works on,” said Bobby.

Michael interjected, “This is an American tradition. What’s better than hanging with your boys, driving fast cars and meeting women?”

Joel the mechanic who owned the shop walked up and said, “Are we going to do this or what? I feel like winning a race tonight.”

Joel is 32 with 2 kids at home and serves as a father figure to many young racers. When he’s not fixing cars, he’s building and modifying them for street racing. “These kids come here to have a place to go, an identity. This gives them a sense of belonging,” Joel said. “I remember when I crashed my first car. I felt like such a loser. Your car becomes your identity. We are our cars,” he said, smiling.

Joel is well-known for his car all across the Island. And for his expert knowledge modifying Subarus to make them faster than Porches and Ferraris. “There’s no school for this. It’s all trial and error,” he said. “You might get a few tips, but people don’t like to give out their secrets. It’s what makes them competitive.” In addition to building cars, Joel is a big-time Long Island racer. But unlike his followers, he only opts for “money-runs” that pay big returns.

These “money-runs,” are highly organized events that can pay upwards of $10,000. Toby said that last year he’d been to a $20,000 race where the loser tried to leave with the money. “They caught the guy and beat the shit out of him,” he said. “The stupidest thing you can do is run from a race.”

After a price is settled, the racers meet in a remote location, usually a service road off the highway where no cars can shoot out. The whole process takes 15 minutes or else the cops break it up and “people get arrested and cars are impounded.” Small crowds usually attend, and side-bets pile up. The cars then perform a series of burnouts to heat up their tires so they will grip the street better. Someone flags the race and then they’re off.

“How do you know that the other guy won’t swerve into you?”

“That’s a risk you take,” interceded Bobby. “But you anticipate that the other driver is going to swerve. You’ve got to train your instincts to react.”

“Are the gains really worth such a risk?” I ask.

“It’s a feeling, man. You really can’t explain it. It’s you versus that dark road,” Toby said.

“What feeling? Everyone keeps saying it’s this ‘feeling.’”

At that point I knew I wasn’t going to get any more. I was on the outside looking in on something esoteric and specific with its own rules and ideology. It seemed that only if I dropped $50,000 into my car could I begin to understand their language, their culture, their existence.

“I’ll take you for a ride,” Joel said, nonchalantly. “Give you a taste of what we do.”

“No thanks. I’ve got a two-year-old at home and I don’t drive past sixty-five in my KIA.”

They laughed at me.

Suddenly I was in a racecar on a highway. Traffic was sparse as I held on with two hands to the handle above the window. I don’t know why I trusted this stranger, but I wanted to experience this elusive “feeling” everyone was talking about.

“We’re going to pull onto a service road so you feel safe,” Joel reassured me.

And that’s when it happened: We went from 30 to 110mph in 2 seconds. The engine thundered, my chest flew back, street lights whirred by, time stopped and I was nowhere but inside that moment. And just like that: It was all over and I couldn’t stop laughing—a child’s giggle that wouldn’t let up.

“You see! You hear that giggle!” Joel shouted. “That’s why we do it! That’s the feeling! Now what does that feel like?”

That night, we went to another car show on North Ocean Avenue. Once again, the parking lot teemed with cars and trucks. Engines roared, tires burned, kids laughed and milled about, cops came and went. Although I now had a sense of why they were drawn to this dangerous game, I was still conflicted. What would happen when one of them flipped his car on the Southern State or plowed over a kid on a bicycle? Did they understand that this feeling they were chasing could have very real consequences?

I suppose the fact that I asked these questions partly explains why I’m not a street racer. Racing gives its devotees definition—a purpose. And even if it is all an illusion, they do manage to be happy in the moment. They’re kids acting like kids, after all, and at these speeds there’s no time to be afraid.