When she’s not working as an aerial photographer, Alex Ferrone owns and operates her eponymous photography gallery in Cutchogue. The space is housed in a renovated 19th century building on Main Road and exhibits photography year-round. This month Ferrone has curated Metropolis, a new exhibition of diverse cityscapes taken by Long Island-based photographers Ray Germann, Scott Farrell and Rich Faron.

Ferrone said that what excites her about the artists is “their individual interpretation of appealing factors of particular urban scenes.” From Huntington, Ray Germann is a 25-year darkroom veteran who went digital in 2006; a trajectory that parallels the balance in Germann’s work—a seamless blend of vintage photographic looks achieved through contemporary process.

“I started photographing New York City in 1978 and continue to document the city, photographing subjects that I find interesting including street scenes, architectural icons, people and storefronts,” said Germann. “Originally the work was done using silver films, however now the work is being done entirely in the digital format. My goal is to have the print look as close to a darkroom print as possible.”

Germann’s “The Brooklyn Bridge” is dizzying and breathtaking with a steep upward tilt that captures all the gravitas of the iconic structure. The portrait’s Woody Allen meets Alfred Stieglitz aesthetic captures the symmetrical intricacy of the stanchions and cabling, as well as the fragility and craftsmanship in the brick foundations. Germann’s classical portrayal underscores the universal truth that the Brooklyn Bridge, in its rough-hewn, yet elegant way, is New York—then, now and always.

Germann’s “Guggenheim Museum” is both pleasing and thought provoking. It retains the stark black-and-white contrast of the old school. And its composition is both hard angles and soft curves as it captures the winding staircases of the museum and its spectators in a jagged, paradoxical undulation. The works of art in the Guggenheim recede to the background of the shot, but we get just enough of them to imagine the artistic unfolding of Gide’s mise en abyme. Stepping through the looking glass of Germann’s vision, the photograph becomes an intellectual trapdoor to the bottomless journey of art within art within art—ad infinitum. 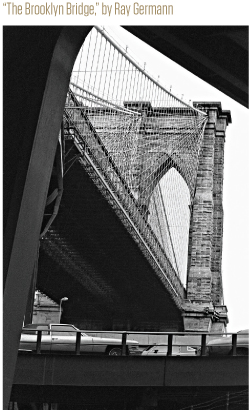 Huntington Station’s Scott Farrell has a particularly diverse aesthetic and has taken a circuitous route to his position behind the lens. After a long career in the media industry, Farrell shifted gears mid-stream to focus on his two true loves—his family and photography. He worked hard to bring his portfolio up to speed for this exhibit with Ferrone’s encouragement and guidance.

“For several of my photographs, Alex thought the composition or perspective worked but felt there should be a little something more,” said Farrell.

“Alex very generously offered invaluable, honest feedback and suggestions that provided validation concerning some of my ideas. Being recognized by an accomplished photographer is a tremendous compliment.”

Farrell’s “Guggenheim Façade Portrait” is its own version of museum as object, and an interesting departure from Germann’s interpretation, which makes for a curatorial contrast between the two works. Farrell reads the museum as a geometrically benevolent monolith and composes a neck twisting shot that speaks to primitive form and vertical power. In his take on the Guggenheim, Farrell simply captures a really unique shot. But more significantly, he conveys a sense of wonder, a sense of that space where structure meets sky as reality ends and dreams begin. 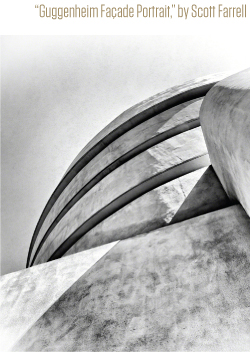 Water Mill resident and Pratt Institute alum Rich Faron creates photographs that are moody and cinematic. This is possibly due to the atmospheric feel he’s created in his work via the restoration of his father’s 1953 Kodak Rangefinder. It’s this particular camera that captured Faron’s imagination as a child and several of his images included in the exhibit are a result of it.

Faron’s “High Line” is photography at its essence, a contemplative study in shades of grey and black shadow, more fog than photography. A couple walks into frame as if walking out of—and eventually back into—the abyss. The piece is simple in its execution and complex in its suggestion. Faron raises questions and invites us to speculate. Is it a moment of darkness or light? Of hope or despair? In art, as in life, we can’t be sure. Nor should we be.

Finally, his “Sixth Avenue” is an ephemeral wisp, a subliminal sensing of the rhythm of all cities, implying all and proving none. With its bus stop signage, background lamplight, swirling steam, trippy shadows and stark windows, the shot evokes Godard’s Breathless, Fuller’s Park Row, Wilder’s Double Indemnity and Hawks’ The Big Sleep all in the same shutter click. It’s the perfect picture of a perfect noir moment.

View Metropolis from May 3 through June 8. Alex Ferrone Photography Gallery is at 25425 Main Road, Cutchogue. Hours are 11am -6pm Thursdays through Sundays and also by appointment. Call (631) 734.8545 for more info or visit alexferrone.com.