It’s Friday evening in Long Island City. Zachary Gelnaw-Rubin is preparing for his shift at Dutch Kills, a speakeasy-esque Jackson Street bar that’s a pebble’s skip from both the LIE and an episode of Boardwalk Empire. Behind the nondescript brick façade is a dimly-lit, wood-paneled watering hole teeming with young professionals knocking back cocktails and pouring out conversation. Seated inside a small supply room behind the bar, Gelnaw-Rubin, 29, talks about those drinks; more specifically, what’s keeping them cold. It’s all about ice. Yes. Ice.

The aesthetic is in the ice forms: Perfect square blocks, spheres, logs. But as Gelnaw-Rubin explains, the sleek look is only part of the overall benefit. “One large cube of ice has a drastically lower surface area than a scoop-full of chipped ice out of a standard issue ice maker,” he said. “This allows the bartender much greater control over the temperature and water content of their cocktails.”

Gelnaw-Rubin, along with partners Richard Boccato and Ian Present, owns and operates Hundredweight Ice, a company started in March 2011, headquartered in Dutch Kills and devoted solely to fabricating and distributing large-format, crystal-clear ice for use in beverage preparation.

“It’s part of a new wave of imbibing that’s more sophisticated,” Gelnaw-Rubin said of what he calls Big Ice. “To me, it’s a really attractive thing.”

According to Gelnaw-Rubin, a common misconception is that Hundredweight uses some sort of special, superlatively filtered water to achieve the complete clarity found in the finished ice product. “Nope—we use good old New York City tap water that we run through a double charcoal-filtration system. The Clinebell [Block Ice Maker] does the rest.”

The drinking public seems to be responding. While Hundredweight’s client list reads like a who’s who of chic New York City pubs and restaurants, the craft-ice trend is quickly spreading to the Island.

“I think it’s catching on,” said Paul Fitz, 27, manager of Bay Shore hot spot Tullulah’s, which features spheres and blocks produced on the premises using molds in all of their higher end cocktails.

“I feel like it’s making its way out here. It’s a cool idea, and it actually has a purpose, not just to sell drinks.”

Echoing Gelnaw-Rubin’s reasoning, Fitz said customers appreciate the craft-ice difference. “[The ice] is not watering down your booze. You get the chill without the water.”

East Hampton staple Nick & Toni’s has been producing and using craft ice forms on site for more than a year, according to beverage manager Samantha Romanowski. The North Main Street restaurant offers about 20 different cocktails and you’ll find ice globes in signature items like their aged Negroni and top-shelf whiskeys, bourbons and ryes. 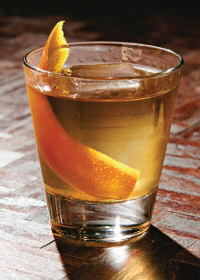 Additionally, Nick & Toni’s “Finest Gin & Tonic” boasts lime-juice infused ice cubes. “The ice actually becomes part of the drink,” said Romanowski. “[Customers] love the globe because it looks artistic and cool…it looks fun and fresh in the glass.”As the ritual of imbibing evolves, the tenet of supply and demand remains. “It only makes sense that this type of ice should be widely available to a bar industry which is rapidly advancing its method and craft,” Gelnaw-Rubin concluded. “People are paying good money for carefully crafted drinks using very high-quality ingredients… Putting crappy ice in a $14 cocktail is like a Michelin-star chef squirting ketchup on a steak then serving it on a paper plate.”

The trick to achieving clear ice that is free of any trapped air, striations or impurities is unidirectional freezing.

Picture the ice trays that came with your home freezer: Because they are not made from any type of insulating material, the ice freezes from all sides into the middle, thus trapping all the air and whatever else is in the water in a cloudy core. Historically, clear ice was harvested from lakes and rivers, where it froze in one direction—top down. The Clinebell uses the same principle, just turned upside down. The freezing coils are located on the underside of the water basin, freezing water from the bottom up. The added stopgap of a water-circulation pump prevents any impurities from getting a foothold in the rising ice. The result is 300 pounds of totally clear ice, with a layer of air bubbles and impurities at the top that are easily skimmed off.