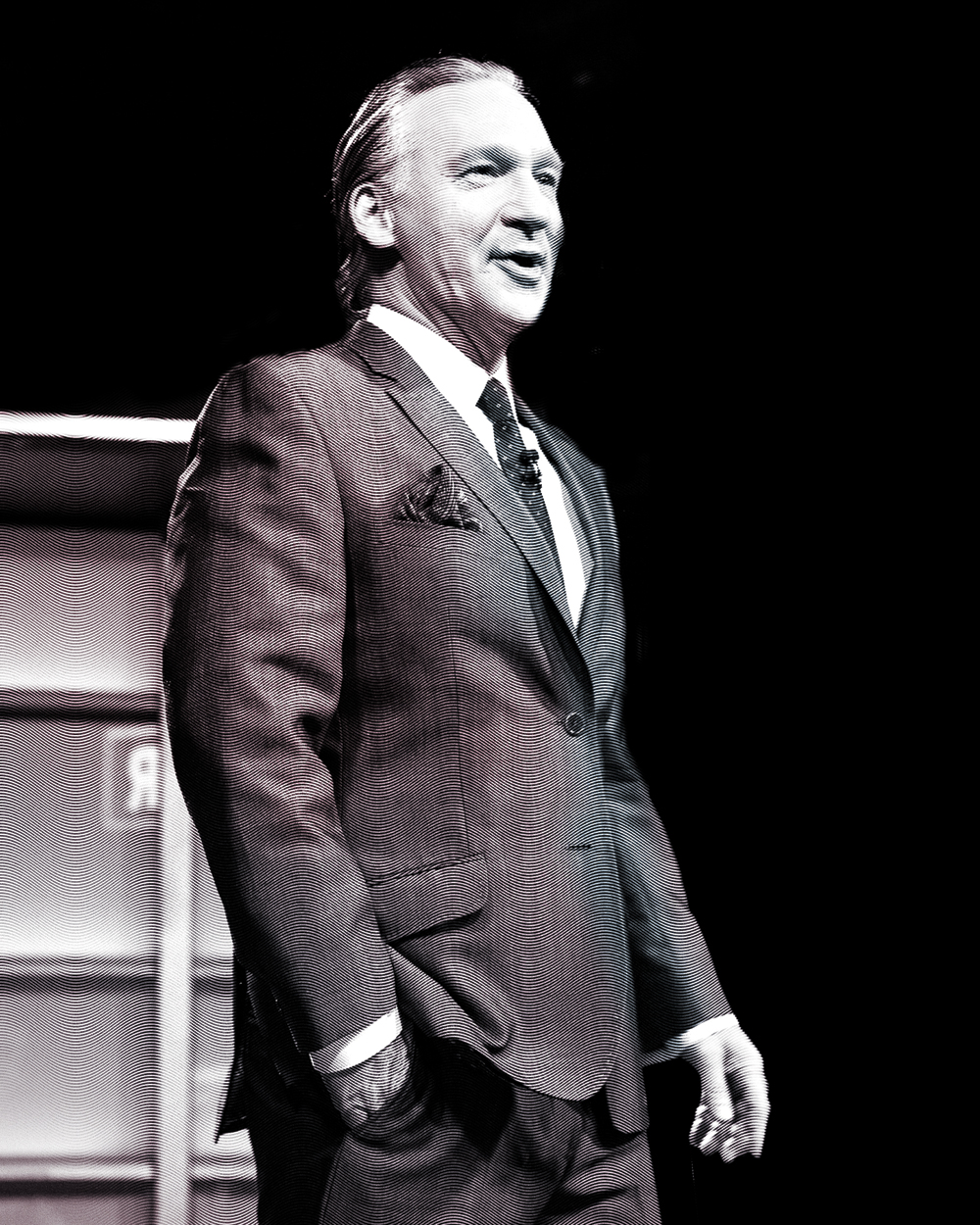 Bill Maher, the outspoken political commentator, stand-up comic and host of HBO’s Real Time, wasn’t always so self-confident. Growing up in River Vale, NJ, Maher knew he wanted to be a comedian from a young age, but he never shared that with anyone. “I was a very shy kid,” revealed Maher, “not the type to make a spectacle of myself at school. But I think I had kind of a sly, subtle sense of humor. I didn’t even tell my parents that I had any notion of doing comedy until I actually started doing it after I was out of college. I was living in New York and they were like, ‘What are you doing?! Your life has started and you’re not telling us what you’re doing.’”

The son of a radio newsman and a nurse, Maher was used to discussing politics at the dinner table. But the Cornell grad didn’t become a political comedian right away. “When I was younger I tried to be political,” recalled Maher, now 58. “It’s just very hard for the audience to accept political commentary when you look like you just started shaving a week ago. So it didn’t really go over until I was a little older and had more gravitas.”

Maher’s gravitas is apparent when he’s challenging his talk show guests on weighty issues like income inequality, climate change, voting rights, healthcare and religion. In his irreverent 2008 documentary, Religulous, the proud atheist said “faith means making a virtue out of not thinking,” which is reminiscent of the Mark Twain witticism “faith is believing what you know ain’t so.”

A modern-day hybrid of Mark Twain and George Carlin, Maher is interested in effecting real change by trying to flip a gerrymandered congressional district in the November midterm elections. Real Time’s Flip a District campaign encourages viewers to use social media (#flipadistrict) to state why their entrenched representatives should be fired. Hoping to counter balance some of the excesses arising from 2010’s Citizens United ruling (which allows corporations to spend unlimited sums of money on political ads) Maher is expected to spotlight the chosen congressman on his show and occasionally perform stand-up in the district. 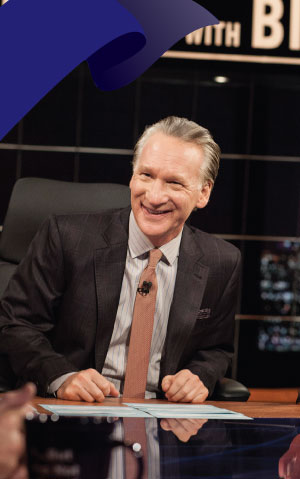 In 2012, Maher became a minority owner of the Mets. He’s looking forward to visiting New York in June to catch a game at Citi Field and perform his stand-up act at the NYCB Theatre at Westbury. The liberal satirist discussed the electoral process, voting rights, Obamacare, the talk show host playbook and his beloved Mets.

Long Island Pulse: How do you respond to those who say money doesn’t always affect elections?
Bill Maher: Of course it doesn’t always work, but that doesn’t mean that one person like Sheldon Adelson should be able to single-handedly finance an entire presidential campaign. I don’t think this is how the founding fathers envisioned democracy would work. Someone has to explain to me just where the theory that money equals speech came from. It’s like saying a microphone is speech. It’s not speech. A microphone enables speech. And the fact that the Supreme Court is so naïve to think that money doesn’t influence elections? They’re either liars or they’re reading My Little Pony too much.

Pulse: They also say we can ignore all the political ads.
BM: Yeah, and Americans are so good at ignoring ads. If they were good at ignoring ads, would anyone ever drink Budweiser? Have you ever heard anyone say, “Yeah, Budweiser, that’s the best beer I’ve ever had?” No, they drink it because it’s advertised the most.

Pulse: Could restrictions on voting actually motivate more people to vote in the midterms?
BM: Well, that’s the hope. Of course the word has to get around to them. And the people who are least likely to vote are the people who are most needed to vote. We should have voting on the weekends. Afghanistan recently held an election on the weekend and 60 percent of the people turned out—and this is with the Taliban staging attacks on polling booths. We don’t have attacks on voting booths in America and we didn’t get 60 percent of the people to turn out. Why can’t we at least get to where Afghanistan is with elections? We should make voting easier, but of course the Republicans only ever want to make it harder because that serves them. The only way they can keep winning elections is by gerrymandering the districts and restricting people from voting because the demographics are all against them. Women, minorities and younger people are all moving in the column away from the Republicans.

Pulse: Will Obamacare continue to grow in popularity?
BM: I’ve always been a believer that Obamacare’s best friend is going to be word of mouth. Because, in the absence of tangible results, all a lot of people will hear is rumor, Fox News and pundits on TV. But when you start talking to your brother-in-law and he says, “You know, I would’ve been fuck out of luck if it wasn’t for that damn Obamacare because I got this and we went there and the pre-existing condition was not a deal breaker.” That word is going to get around. It is after all people’s health. The Democrats should stand up for what they passed. It’s not that hard a sell to make. I mean, they gave people health care. It’s not like they gave them herpes.

Pulse: Why do Republicans claim Obama is abusing his executive power when he’s signed fewer executive orders than most presidents?
BM: Of course when the drama queens hear that he used executive action, he’s declared himself a king. They have this idea in their heads that he’s the first president to do it when of course all presidents have done it. He hasn’t abused it. His executive orders are things like setting higher fuel efficiency standards on cars and trucks. It’s a way for the government to lead the way on issues that are good for the country. But if Obama does it, it’s suddenly Dracula crossed with Hitler times lung cancer.

But if Obama does it, it’s suddenly Dracula crossed with Hitler times lung cancer.

Pulse: What do you say to those who say you’re polarizing?
BM: I think they’re right. Every time you tell the truth, you’re polarizing. You’re never going to get everybody and that’s okay. I remember when I started doing Politically Incorrect twenty years ago, the knock on the show from the get-go was that you could never be a television host if you take a stand and tell people what you think. People were thinking about Johnny Carson and that whole playbook—which, by the way, played right up until the end with Leno and Letterman. They played by the Carson rules of never tell people who you voted for, do one joke that’s sort of a knock on the left and another one that’s sort of a knock on the right and always stay in the middle. That’s fine. But I said, “You know, maybe it can work. Maybe the people are a little more sophisticated than you give them credit for. Maybe they’ll keep watching the show even if they don’t agree with the guy 100 percent of the time.” I’ve been a host for twenty years now so it’s kind of true. They can take it.

Pulse: How about those Mets?
BM: They have a real serious pitching staff and when you have good pitching you could be in every game. So I think if they get a little help with some bats coming alive, they could surprise a lot of people. But, hey, win or lose, they’ve sure got me for life.

Bill Maher performs at NYCB Theatre at Westbury on June 29.