Cliff Schadt Jr., was eager for the arrival of a 4-year-old wild mustang to Diamond Hedge Farm. Schadt, who grew up in Long Island, but left home at 16 to work in the western United States where he competed in rodeos and worked for and managed ranches, recently returned to the Island and established Common Thread Horsemanship School. He trains riders and horses and for the next 90 days he will train the wild mustang that was taken by the Bureau of Land Management from a free roaming herd along the Nevada-California border. The BLM routinely rounds up mustangs as part of population control. 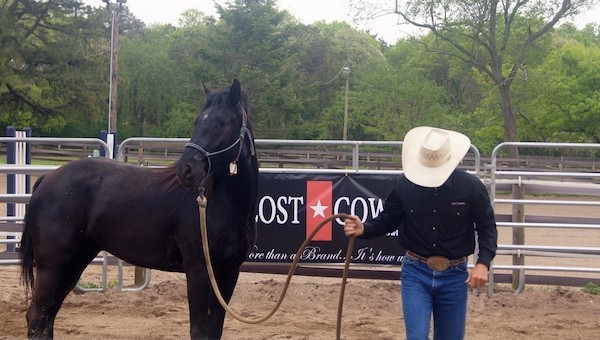 “He seems like he’s taking it in stride,” Schadt said. “You can tell he’s thinking about a lot of things but I’m surprised by how well he’s doing.”

According to Schadt the mustang will spend 90 days undergoing basic horse training with Schdat and saddle bronc champion Jace Angus. The training includes confidence, posture, calmness and obedience. Then on September 22 and 23 Lost Cowboy will take place in a skills show and competition at Mountain Springs Arena in Pennsylvania. An adoption auction will follow the competition.

The training is part of the national Extreme Mustang Makeover program created by the Mustang Heritage Foundation that is trying to increase the adoption of wild horses kept in the BLM’s facilities, of which there are currently more than 50,000.

Lost Cowboy is being sponsored by the founders of the fashion brand Lost Cowboy, Kevin Harney and Scott Pavick and Dawn Orlando the owner of Diamond Hedge Farm. 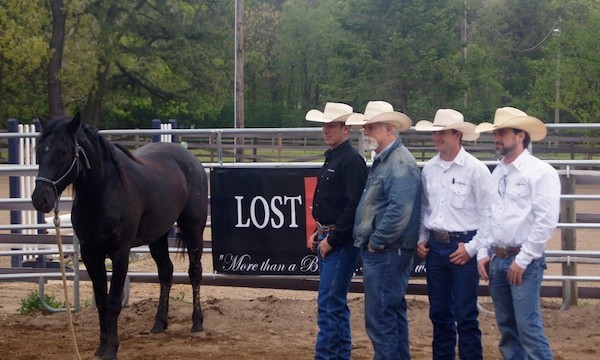 “We are deeply moved by the presence of this majestic animal that symbolizes the American culture and heritage,” Harney said. “It is our privilege to helps save Lost Cowboy and we hope to enlist more supporters in preserving and rescuing American mustangs.