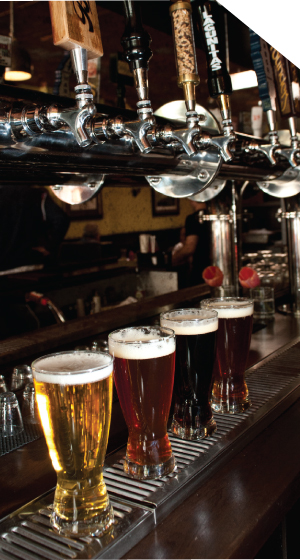 “Waterfront’s yeast is witbier, giving us less cloudiness and a lot less of the banana and clove flavors you’d normally find in a hefeweizen,” said Michael Philbrick, owner and brewmaster. “We also used lemongrass and grains of paradise in the recipe, so it’s more of a light blonde ale with wheat.”
Waterfront will pour at SALT until Labor Day.

Atmosphere: “I need a pound of liverwurst…and a six-pack of Paulaner Salvator.”

What To Know: This potato salad-preparing delicatessen is an authentic dose of Deutschland; David Hennings’ parents were both born in Germany. They immigrated and opened a delicatessen in Queens, then followed with several on Long Island. Hennings continues the tradition with made-to-order sandwiches and house-made schtuffs (the latter include bratwurst and sauerkraut). My preference is his selection of hefeweizens, doppelbocks and pilsners. The bottle-only battalion features approximately 35 beers from Germany.

What To Drink: Hacker-Pschorr’s  Sternweisse is one of four beers that were already released in Germany, but which are debuting in the United States in 2014. This cloudy, marmalade-colored weizen has flavors of breadiness, clove, banana and citrus.

Atmosphere: A beer-fueled journey across America.

What To Drink: The beer is primarily organized by style, but Road Trip also has a category of 10-12 assorted drafts solely for “the real beer geeks who want to be wowed,” said Krumpter. This recently included two rarities from Founders: KBS, a deliciously rich, cave-aged stout swirling with chocolate, coffee, bourbon and vanilla, and Barrel Aged Red’s Rye IPA, which subdues the original’s hoppiness with assertive notes of bourbon and wood. Krumpter also dabbles with one-brewery showcases. Samuel Adams is slated to invade with 30 beers in July.