The waters surrounding Long Island are rich, not just with bounty, but also with history. And they’re particularly rich with adventure and folklore, especially for those who hazard to navigate her depths.
The late Captain Carmine Marinaccio, a charter boat captain from Long Beach, shared one close call for a Prohibition-era Freeport man:

Jack Combs, a burly bayman, and his partner, “One Arm Charlie,” shared a bay house in the Haunts Creek area. He and his friend had converted their booze into cash and deposited it for safe-keeping in a cigar box hidden under a cot. By the time they returned the next day, the extra high tide had soaked their $5s, $10s and $20s into a wad. Jack hastily went to town and returned with a box of thumbtacks. The two had just finished tacking the money on the walls to dry when federal marshals, guns in hand, kicked the door open and, gaping at the money hanging on the wall, shouted: 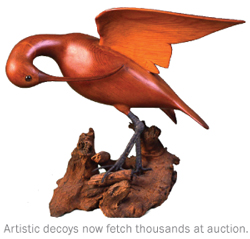 “What for?” Jack stuttered.

“W, w, we only got money! No booze,” Jack protested. “Ain’t against the law to have money.”

“You have a point,” admitted the officer, “we’ll be watching you.” And with that, he left.

The end of Prohibition and the Great Depression later brought new changes to Long Island, which profoundly affected those who worked the waters. But these will be covered in part two of this Long Island saga. This, part one, begins at the beginning.

The first Long Island watermen were Native Americans who grew corn and vegetables while harvesting clams, oysters and other shellfish. They later taught the colonial settlers their traditions, ushering in a maritime heritage that has been passed down to today. But the first major maritime industry on Long Island was whaling, an endeavor that employed captains, mates, boat builders and shipwrights.

Many of these men were free and enslaved Africans and Native Americans who used dories and skiffs built by local boat builders. They sailed along the South Shore to capture the majestic sperm whales and right whales that were once common here—an industry that was not for the fainthearted. Deaths were common, as were tragedies on the high seas. Ships would capsize, sickness onboard was widespread and ships would run aground, as happened to Circassian off the shores of Southampton in 1876, killing 10 Native American whalemen.

In the mid-1800s the industry began to decline as the whale population decreased and kerosene started to replace whale oil. Long Islanders turned to catching fish and shellfish, which were plentiful in the bays, estuaries and offshore. Baymen and fishermen used a variety of approaches and tools to harvest fish and shellfish, some which have changed very little in the last century. 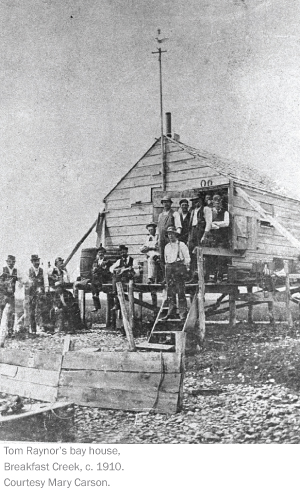 The techniques were often hyper-local. In small harbors and bays they used tongs and rakes to harvest clams, oysters and scallops. These were designed and crafted by local blacksmiths like Theodore Bedell of Freeport. But don’t think “tongs” like the ones in your ice bucket or salad bowl. A tong is a set of tall poles attached to rectangular iron rakes that allowed the baymen to stand in their boats while searching for shellfish. They also built winkle “pots” to harvest conch—these were square wooden traps with a small stake in the middle to secure the bait. Baymen combed the bottom with hand-pulled rakes—long poles attached to a metal or iron “basket” that scooped up shellfish, especially bay scallops, which brought high prices at the Fulton Fish Market (now the South Street Seaport).

Beginning in the winter most baymen harvested shellfish, carving holes in the thick ice and using tongs and rakes to extract the valuable bivalves. When the ice thawed they turned to fishing, planting “pound nets” in the bays. (A pound net is a complex series of poles connected by netting which creates a maze to trap fish.) Offshore dories and skiffs pulled their handmade fyke, seine and trawler nets along the beaches, catching striped bass, fluke and flounder, mackerel and squid. Fishermen also used “longlines” to catch cod and other fish, using “skimmer” clams harvested near shore as bait.

In the mid-19th century, sport fishing was on the rise. The development of the LIRR brought the early weekend warriors out to the island for vacations and fishermen began taking sportsmen for day and weekend excursions. These men hunted wildfowl as well as fish. It’s interesting to consider that our early fishing culture influenced tourism as well as other industries—enterprising businessmen began building hotels on the marshlands to accommodate the trend. Early hotels in the area included the Greenhouse near Jones Beach and the Wawayanda club near Captree Island in Great South Bay. The hunters used a variety of watercraft including gunnin’ boats and cat boats in the shallow bays during the winter when fishing opportunities were limited. Most baymen and market gunners carved their own decoys for hunting, but they also began crafting “show” decoys to sell to their customers, some are worth thousands of dollars today.

Baymen also built bay houses on both the North and South Shore marshlands—small wood-framed structures with pole foundations that were used during salt hay harvesting (fodder for livestock during the winter). The baymen would go clamming and oystering on the beds near their shacks in the winter and set pound nets for fishing during the spring, summer and fall. They dried their fishing nets on large “net reels,” a common sight on Long Island for over 100 years.

In the late-19th century immigrants from Italy, Scandinavia and the Mediterranean came to Long Island and found work alongside the baymen in Freeport, Bay Shore and other South Shore fishing communities in western Suffolk and Nassau Counties. It is this story of various walks of life coming together that created the modern fishing industry we know today.