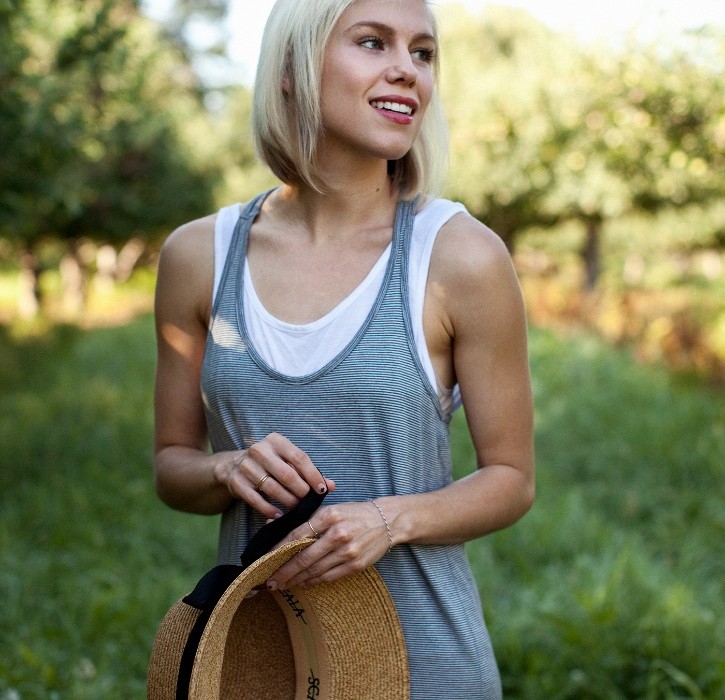 I know it’s rude to stare too long sir
But were we friends three lives ago?
I see myself in strangers in the people I don’t know
—From “Perfect Stranger” by Grace Weber

You may have unwittingly heard her voice while standing in line at Starbucks, seen her perform on Oprah, or heard her on NPR’s Mountain Stage. But when you hear her new record, The Refinery, and the first single, “Perfect Stranger,” you will remember Grace Weber. The 25-year-old Brooklyn-based singer/songwriter grew up in Wisconsin listening to powerful female voices like Etta James, Dinah Washington and Lauryn Hill. And singing in the gospel choir from ages 12-15 was fundamental in helping her find her own voice.

Weber began writing songs during her freshman year of college and her 2011 debut album, Hope & Heart , made it into the top ten on the iTunes Singer Songwriter Chart. Chosen as a Presidential Scholar in the Arts, Weber had the honor of performing at the Kennedy Center and meeting the President. She performed on NPR’s Mountain Stage, and recently made it onto NPR’s list of 100 new artists to watch at SXSW. The rising indie soul singer spoke about her influences, performing on Oprah, playing with Jon Batiste and her musical evolution.

Pulse: What were you listening to growing up?
Grace Weber: When I was really young, I would listen to a lot of powerful female singers including Eva Cassidy, India Arie, Etta James, Dinah Washington and Lauryn Hill. Those women were my voice teachers growing up. I’d listen to the way they sang and would try to mimic their inflections or the way they would sing a vocal run. Being a part of the gospel choir really taught me how to sing with all of my being, with all of your emotions coming through every note. I think I really found my own true voice through that experience.

P: You were one of eight chosen to perform on The Oprah Winfrey Show in 2009, out of 400,000 video applicants. How did that happen?
GW: I made it onto the show with my “Natural Woman” youtube audition and then sang that song on the show. I used the $25,000 that Oprah gave me to help record my first record in 2011. I sent Oprah a thank you card for giving me the money. It was a surreal experience writing that note. I really had a hard time getting past “Dear Oprah” because how do you thank Oprah Winfrey for giving you the experience of a lifetime? I always wonder if she ever got my card…

P: After that performance you were offered some record deals. Do you feel you made the right decision in passing up major labels to chart your own course?
GW: Well, back in 2009 I didn’t have any of my own original music yet, or at least I didn’t have anything that was very good. We ultimately backed away from pursuing a record deal so that I could spend time developing myself as an artist and really working on my songwriting and my point of view instead of throwing me into the studio with just my voice and some producers. I’m so grateful for that time because it allowed me to find myself.

P: How has your sound evolved from 2011’s Hope & Heart?
GW: I think my sound has evolved from 2011’s Hope & Heart in the same way I’ve evolved as a person since then. I wrote my first album when I was 20-22, so it was about what I was experiencing in my early 20’s—like being in love for the first time or missing my home back in Wisconsin. My new record, The Refinery, represents the next phase of my life, when I started knowing and trusting myself more. So the record reveals some of the darker sides of who I am, of heartbreak and loss, but also of learning how to forgive and love yourself even after you screw up. Sonically, for The Refinery, I wanted to go back to my gospel and soul roots. It was so much fun recording with the gospel choir, horn players and letting the sound be gritty.

P: Who would you most like to tour with, and why?
GW: I would love to open for Jon Batiste or Adele. I started singing a little bit with Jon Batiste lately and I have learned a lot about performing live through experiencing his shows. He has so much freedom on stage and I love his ability to connect one on one with the crowd. I’d love to keep playing with him and experiencing that type of freedom and fun on stage. And Adele because… she’s Adele.

Check out Grace Weber live on the last day of her residency at The Rockwood Music Hall—Friday, May 30th at 8 p.m.

And see her at the chichi SoHo House in NYC on Monday, June 9th

Look out for her cd release party in September