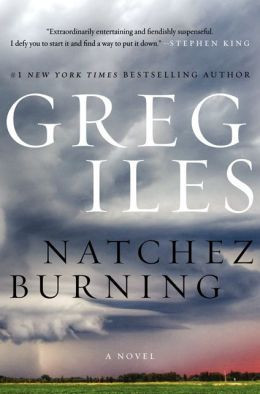 All you have to do is ask.

That’s how to keep small life-knitting memories from being lost. It’s how to save tales of your grandma’s favorite toy, your mother’s best friend, your dad’s first love. Knowing those stories preserves history that books may never hold.

And to get those stories, all you have to do is ask and listen. But, as in the new novel “Natchez Burning” by Greg Iles, be prepared for what you hear.

Natchez Mayor Penn Cage knew that District Attorney Shadrach Johnson only called the Mayor’s Office when he had no other option. Penn and Johnson were far from friends – one might even call them adversaries – but Johnson’s announcement that he was planning to file murder charges against Penn’s father stunned the mayor.

For more than forty years, Tom Cage had been one of Natchez’s most beloved citizens. Dr. Tom had stitched, birthed, vaccinated, and tended folks, black and white, and was considered “a saint” by many. That he was accused of killing Viola Turner was ludicrous but when Penn tried to clear up what was surely a misunderstanding, Tom cited doctor-patient confidentiality, saying only that he’d treated his former nurse before she died.

But somebody had killed Viola Turner by overdose, and her son, Lincoln, was pushing for an arrest. Dark-skinned Lincoln hinted that racism might be a motive; back in the 1960s, when Viola worked for Tom, Natchez boiled with racial issues and it wasn’t unheard-of for a white man to take advantage of a black female employee.

To Penn, though, that didn’t describe his father. Tom was known for his fairness and his morals, so Penn began to listen closer to old rumors that re-surfaced – rumors about Viola and long-ago crimes supposedly committed by a group of local rednecks that called themselves Double Eagles. Penn heard about the brutality attributed to them, the whispers of attacks on black men and women, destruction of black businesses, people who disappeared without a trace.

Was his father involved in those murderous activities? Was it possible? Penn wondered… and Tom wasn’t saying…

Though I have to admit that I was ready for the end of this novel by page 490, and though it has its predictable elements, “Natchez Burning” is a very good book.

Maybe that’s because author Greg Iles uses real history as a reference for this multi-layered thriller, which adds raw authenticity to scenarios that will surely give the average reader nightmares. Yes, there’s a whole cadre of bad guys here who would be better described as “horrible guys,” so heinous are the crimes that Iles allows them. Fortunately for readers, that’s nicely balanced by a likeable lawyer-cum-mayor with finely-honed crime-solving skills and a girlfriend who’s hungry for cold cases.

I don’t think this is a read-in-bed kind of book – in part because of many disturbingly heavy scenarios and partly because, at nearly 800 pages, this book is heavy. Still, it’s finely detailed, meticulously set, and written well enough that “Natchez Burning” is a book for which you should surely ask.