The Terrain is a meat-and-potatoes, tried-and-true SUV similar to the guzzlers of yore – “yore” being those pre-2008 days when gas prices averaged $1.78 nationwide – but it’s also thoroughly modern, equipped with a four-cylinder front-wheel drive engine delivering 23 miles per highway gallon, 19 in the city. That’s ain’t Prius territory, not by a long shot, but it beats the crankshafts out of the 10 or so MPG some of those Brontosaurus-sized SUVs like the Hummer and the Navigator used to suck up in 1999.

And what do you sacrifice with a 4-cylinder powering a 3,798-pound ride? Surprisingly, very little. I got power when I needed power – when passing other cars or needing to accelerate out of a tight spot – and at all other times, the Terrain delivered a smooth ride, nice handling, great visibility even when jammed to the hilt with gear, and I never wished I had a 6- or 8-cylinder rig. You can, if you wish, purchase an optional 3.6-liter V6 engine with 301 horsepower. Both all-aluminum engines include direct injection and are mated to a six-speed automatic tranny.

The Terrain’s best feature is its looks. It’s not overly large, but it’s mighty-mighty, angular, distinctive and easy to find in parking lots. Inside, it’s a little plastic-y, especially the odd-looking duckbill over the nav system, which a passenger had to refrain from bashing with her fist. “You just want to break it off – it doesn’t belong!” she said, and I had to concur, though neither of us harmed the Terrain. Very much.

A lane-departure warning system is a great touch, especially since the driver can turn it on at will rather than being required to shut it off with every journey as in other vehicles so equipped. Buyers can choose between either a front-wheel or all-wheel drive system, and standard safety features include four-wheel anti-lock brakes with electronic stability and traction control, six airbags, OnStar, tire pressure monitoring and a security system. A power liftgate, remote vehicle start and seven-inch touch screen navigation system with 40-gigabyte hard drive and reverse camera are also available.

SUVs may have seen their heyday come and go, but the Terrain Denali proves the auto industry can adapt to customers’ desire for size as well as not-terrible mileage. 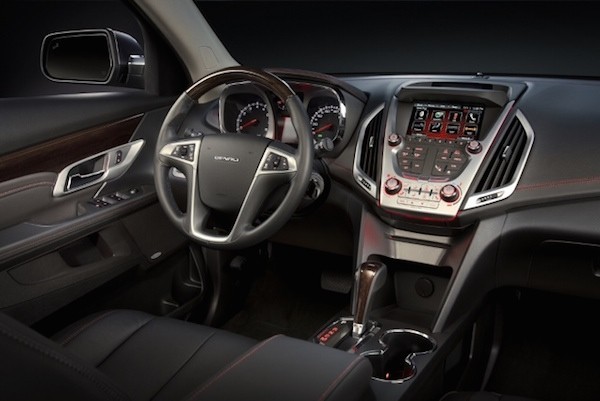