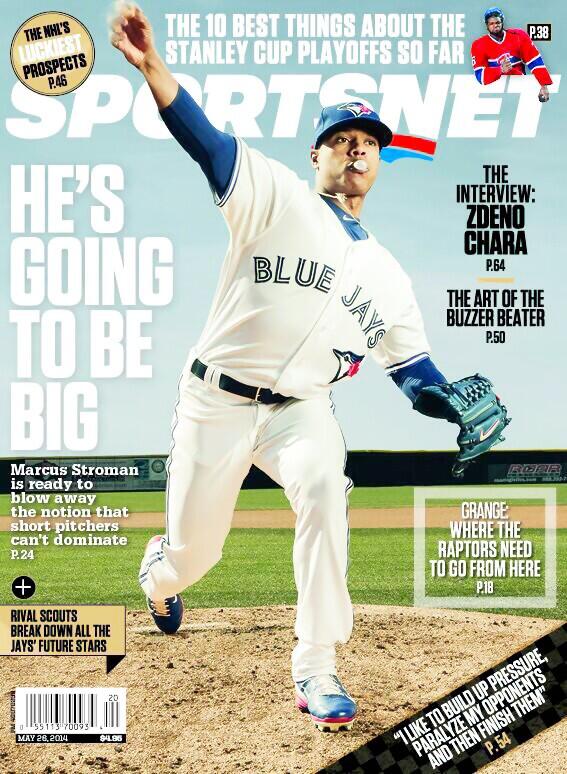 Late last month Long Island native and Patchogue-Medford alum Marcus Stroman was featured on the cover of Sportsnet, a popular magazine in Canada. As the face of the prospect pool for the Toronto Blue Jays, Stroman is widely considered the next big thing in their minor league system.

The organization thinks highly enough of Stroman that they’ve already promoted him to the big leagues and he made his first career start last week, earning a victory thanks to a highly potent offense as of late. The Blue Jays beat the Royals, 12-2, and Stroman was elated.

“It was pretty special,” Stroman told MLB.com after the game. “From the second I went out to long toss before the game, walked out on the field and saw the dome open, a ton of people here. It was pretty special. That crowd we had, and how nice it was. To just go out there and get the win, and to have the team hit like they did.”

In the Sportsnet cover story, there was an astonishing historic note about pitchers being 5-foot-9 or shorter in the big leagues. Simply put, there haven’t been many, and basically none have had long or successful careers. Stroman is 5-foot-8 and he doesn’t want to hear any of it.

According to Sportsnet, over the last 30 years, 2,083 pitchers have started a game in the major leagues. The article went on to say that only four of them have been shorter than 5’9 and they did not make more than eight starts. The numbers are even greater if you go back to 1950 and increase the height one inch.

Stroman pitched six innings and had six strikeouts, allowing just five hits and one earned run in his first start. He is 2-0 (he earned a victory in relief as well) now this season.
Toronto media asked Blue Jays manager John Gibbons if Stroman would get another start. The obvious answer is yes, and the obvious trajectory for Stroman’s career should be more promising then just about every other pitcher to stand 5-foot-9 or shorter too.