It takes little more than a few hours for the monotonous ho-hum drone of the engine to fade into the surrounding silence. From the open-air upper deck of the Dawn on the Amazon riverboat, views of the world’s largest tropical rainforest become a tableau scrolling by at the unhurried pace of the river. There are the occasional interruptions: A chorus of yaps from gaggles of parrots that pull flybys as the sun sets over the uninterrupted green, the periodical gasps of awe from fellow passengers when pink river dolphins surface alongside the boat, the frequent pops of Cusqueña beer cans taking their first breath of jungle air. But other than that, there isn’t much sound at all. And that’s exactly what’s so beautiful about navigating these waterways of the Amazon: The mute button is on. 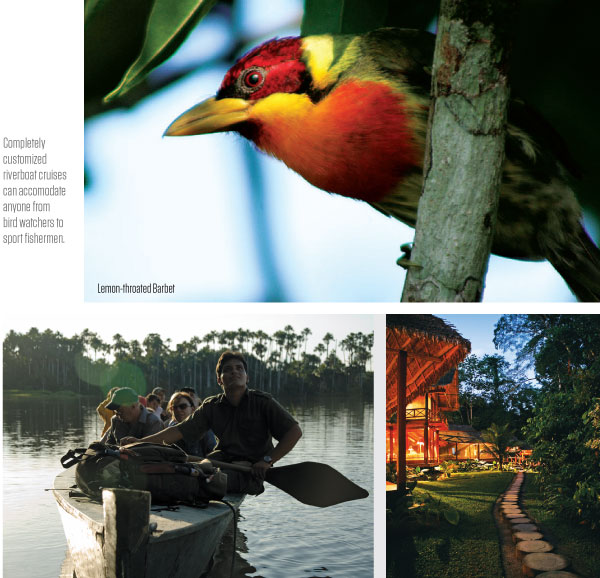 This is Pacaya-Samiria National Reserve. Clocking in at an area twice the size of Yellowstone National Park, it’s one of the least explored and most pristine patches of preserved jungle in the Peruvian Amazon. A biodiversity hotspot, the reserve counts both pink and gray freshwater dolphins, 13 types of primates and 449 documented tropical bird species as residents, among others. There is little to do on a sedate cruise other than sit back on the breezy top deck, riding the wind with feet propped on the side rails and a beer in hand. As Dawn on the Amazon is one of the few riverboat companies with a permit to operate here, there is little to startle the trance-inducing nature other than nature itself—exactly what a riverboat trip in the Amazon should be about.

In charge of the remote control is Bill Grimes, a jovial Indiana native who packed up and left the Midwest in 2003, married himself a purely pleasant local named Marmelita and worked with her to start one of the most modest and hands-on riverboat cruise companies in all of the Amazon. Where in Brazil a crowded boat strung with a maze of hammocks is the most common way to traverse these massive jungle arteries—or, in Colombia, where rustic lodges are far more common than riverboats at all—Dawn on the Amazon specializes in custom cruises on traditional, triple deck, Brazilian-style, flat bottomed, wood riverboats fit for Fitzcarraldo. Comfort levels here hover just on the humble side of luxurious to ensure passengers don’t get so comfortable that the sense of adventure is lost on Egyptian cotton sheets and bottles of bubbly. 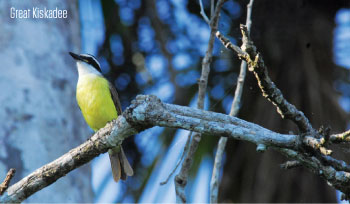 That’s not to say this is roughing it. Grimes runs a tight ship, overseeing the customer experience personally (no travel agents, no middle man, nothing left to chance) and the hospitality and crew with Naval-like efficiency. “My mandate to myself is to only hire locals,” he said. “I have a crew of 20. Many have been with me for years. We are like family.” Along with Marmelita, the duo makes sure guests are getting the most out of their jungle experience, whether that means serving up another perfect pisco sour, encouraging interaction with the deckhands or making sure the gourmet jungle cuisine exceeds expectations (guests can often angle their own exotic river fish, like peacock bass, pacu or piranhas for dinner).

Trips are customizable according to guest interest—birding, jungle treks, scientific research—and last as long as individual groups require. The languid cruises are spent mostly on the aforementioned observation deck, watching fascinating worlds go by: Pacaya-Samiria when the water level is high, Allpahuayo Mishana National Reserve, Tamshiyacu Tahuayo Reserve and Yanayacu Reserve when low. The best moments, of course, cannot be controlled: Spontaneous soccer matches with local villagers deep in the jungle, a blowgun bullseye with native weaponry or an impulsive monkey riding your shoulders on Monkey Island. Or the look on your face the first time you see an Amazon river dolphin. 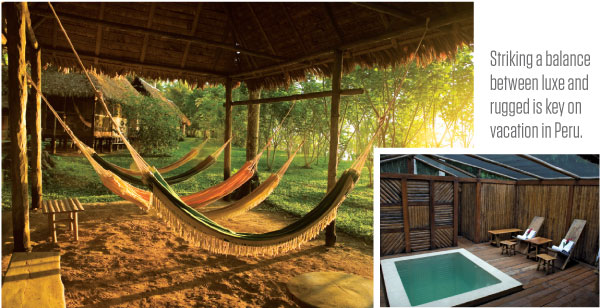 Looking for a place to stay once back on land in Peru? Inkaterra Hotels has been specializing in authentic, sustainable tourism since before any of us knew what sustainable tourism was. The company’s Peruvian hotels combine the best of both worlds: Relais & Châteaux-level luxury with a Rainforest Alliance-certified commitment to the environment.

Our favorite location sits near the base of South America’s most dramatic attraction, the indomitable Machu Picchu, where Inkaterra’s Machu Picchu Pueblo Hotel is buried in jungle-y surrounds on a private 12.3-acre mountainside reserve in Aguas Calientes. A luxurious retreat made to resemble a rustic Andean village, the 85-room hotel isn’t small, but its 1- and 2-story whitewashed cottages instill a sense of Incan isolation nonetheless, being strategically spread out to avoid crowding. Startling views of orchid gardens, the rushing Vilcanota River or imposing Andes mountains never let one lose a sense of place; and larger villas feature private terraces and plunge pools to take it all in. Call it Eden.

The company recently launched new multi-day bird watching experiences that can turn even the staunchest avian naysayer into a birder. The three-night itineraries are available at Machu Picchu and Inkaterra Reserva Amazonica.

The latter, sitting on the banks of Madre de Dios river in the Tambopata Basin (an area lush with virgin rainforests that feeds into the Amazon) offers the possibility of framing more than 500 species in your binoculars, including the seemingly prehistoric hoatzin, pavonnine quetzal and red-bellied macaws. At Machu Picchu, 18 types of hummingbirds fight for your attention. But don’t worry if you dip out (that’s birder for getting shut out), there’ll be a fine Peruvian pisco waiting back in the room, ensuring all is well.