Hear Ye, Beer Me! I’m stupidly geeked, and Greeked, to announce the release of my upcoming collaboration with Great South Bay: Niko Weisse, a Greek-inspired Berliner Weisse with cucumbers!

Berliner Weisse, a regional specialty of Berlin, Germany, is a pale-colored, wheat-malty style alcoholed between 2.0% and 5.0% ABV. It’s traditionally defined by a lactic, yogurt-like sourness with descriptors of cloudy, dry, tart, sharp, and effervescent. Niko Weisse isn’t merely a facsimile of history, though. We added cucumbers, a primary ingredient in tzatziki, to uniquely celebrate my Greekness. 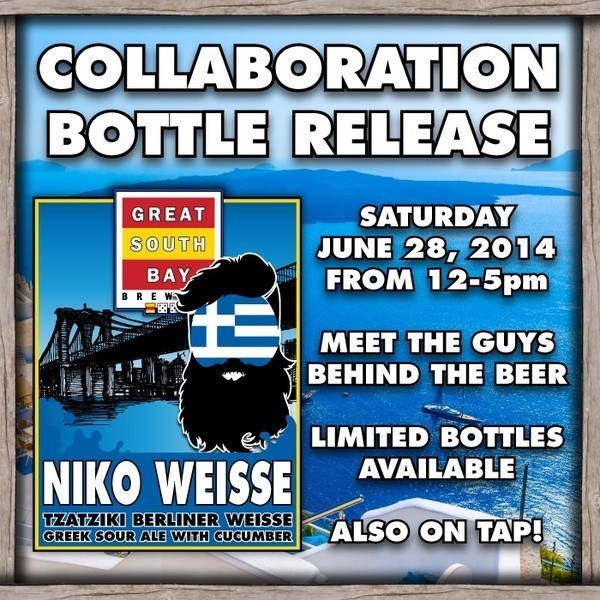 Our collaboration wasn’t a spontaneous affair. An impromptu escapade between two strangers involving intimacy-devoid intercourse? Nope. This collaboration was intense cinematic moments of foreplay between two close-knit companions. Harry and Sally. Jack and Rose. Romy and Michelle. That was us. Before our foreplayage, though, Niko Weisse was anticipated for centuries in Greece, the homeland of my ancestors. 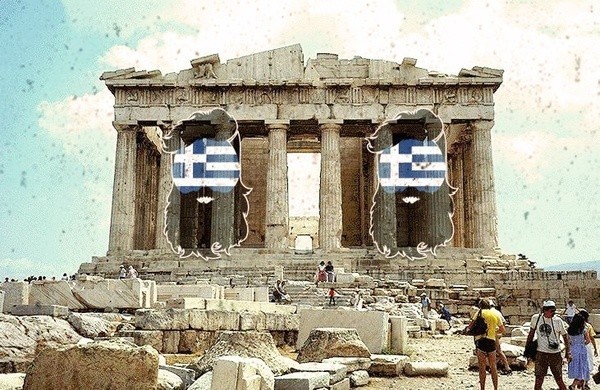 ArchiKromedes remained silent, then, at the lip of a promontory, combusted into a polychromatic mess of organs, evoking a scene from Street Trash. As an effervescent, straw-pale liquid oozed from every orafice, the metropolis gathered and imbibed gleefully amidst the splatterfest. Niko Weisse was born!

Kidding. Its conception actually occurred during a visit to the Bay Shore-based brewery in March, where I chatted with Rick Sobotka, owner and brewmaster, to gather quotes on Lethal Cupcake for an installment of Drank That Local Sh*t. As we popped a bottle of the sweet, chocolate-heavy porter, a covey of cupcakes penetrated our mouthholes and secreted globules of [I dunno] into the skin-encased recesses of our esophagi. We started to drift into the depths of our unconsciousi, initially discussing the genius of Clone High, but eventually settling into a 63-day discussion on streetmeat. We genuflected daily to the enigmatic power of tzatziki, a sauce capable of transforming an inedible, often unidentifiable meat into a lavish delicacy. Our worship immaculately spawned the birth of Niko Weisse, which we started brewing on June 3. 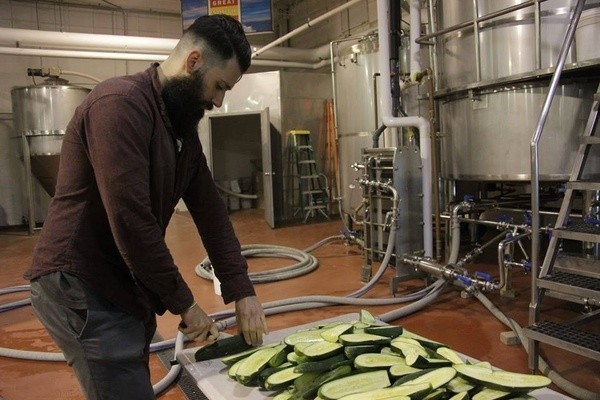 Great South Bay started the process by intentionally souring a 30-barrel mash—malted wheat comprising half of the grist—with Lactobacillus delbrueckii. This bacteria produces carbon dioxide and lactic acid as a by-product of fermentation, the latter responsible for the brightly acidic and sour characteristics of a Berliner Weisse. After two days, allowing the wort to ferment to a desirable pH, I returned to the 39,000-square-foot brewery and hand-sliced cucumbers—100 pounds of cucumbers. Then I combusted into a monochromatic mess of streetmeat.