Nestled in Abstract-Expressionism’s cradle is a landmark exhibit of rare and familiar Robert Motherwell works, a total of 16 examples from the artist’s self-described peak period in the East End hamlet. Founder of the massively influential New York School arts collective, Motherwell reflected on universal contrasts like life and death, head vs. heart and formal vs. informal. A strong example of this duality can be seen in “At Five in the Afternoon.” A part of his recurring elegy to the Spanish Republic theme, the geometric painting/penciling represents the fatal goring of a matador, depicting the transition between life and death. 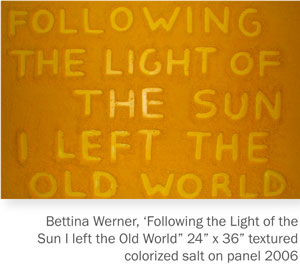 Beth McNeill and her namesake art group will present the opening of the seasonal Hill Street Gallery in Southampton.

Stained with Sweet, the inaugural exhibition, showcases the latest in a series of works by local artists emphasizing simple beauty. “Love Me” is crafted in neon and mounted on a mirror by Tapp Francke, and expressions of affection appear in Bettina Werner’s legendary “Salt Queen” colorized salt technique. Jeff Muhs’ does another one of his signature blends of modern abstraction and old master, while Perry Burns offers non-representative abstract oils.

Stained with Sweet will be exhibited until July 13 at Hill Street Gallery in Southampton. (631) 838-4843, mcneillartgroup.com