“You go fishing for fun for a bunch of years, then all of a sudden you learn that you can make money doing it. That’s how all commercial fishermen get started. What am I going to catch tomorrow? The night isn’t fast enough. You can’t wait to get up in the morning.”
— Joey Scavone, Freeport fisherman

The years following World War II were a growth time for Long Island mariners. Commercial fishermen began harvesting bait in addition to fish—a change that signaled the rise of the increasingly lucrative sport fishing market. This growing business was dominated by returning veterans who could afford to join local party boats out of Freeport, Patchogue, Montauk and other marinas, or who could afford boats of their own. By 1950 New York State commercial fishermen reported harvesting over 142 million pounds of fish primarily from Long Island waters. The Remsens of Freeport, who had a bait station next to their bay house, were also seeing demand for their bait shop at Jones Beach and many other hotspots.

Through the 60s and 70s, hundreds of clammers, like Flo Sharkey of Patchogue, easily harvested four bushels of clams a day from the Great South Bay. And college students like Tony Sougstad began working on the water and enjoying the independence of a fisherman’s life. 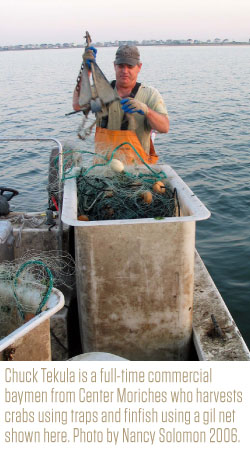 After the 70s, as the environmental movement began to gain traction, the National Marine Fisheries Service issued commercial fishing regulations, while also encouraging investors to build larger commercial fishing boats. These machinations led to severe declines in fish populations—and the issuance of more regulations. Bellmore fishermen and boat builders Rob and Ron Harter were among those who suffered during this period. “Long Island dragger fishing is different than New Bedford, Maine, or down south because here there is such a variation. Traditionally a guy could make his day if he had 10 carts of flounder and a couple of cartons of squid and butterfish. By the end of the day he had a decent amount of money from a little bit of this and that. The way the rules are now you can’t combination fish anymore—you have to target certain species.”

The party/charter boat industry has also struggled with a tide of fluctuating rules. Boats sit idle when fishing seasons open and close, sometimes at a moment’s notice. Recreational baymen and their commercial counterparts cannot harvest clams, scallops or oysters when rainstorms bring pesticides and other toxins into the bay.

And boat traffic is eroding the fragile marshlands as the marine patrols intended to curb this damage fall victim to budget cuts.

In addition to legislative problems, fishermen and baymen must always contend with Mother Nature. “The weather can be a tough thing if you don’t understand it,” said Sougstad who has been on the water for more than 50 years now. “If you do and learn how to work with it, you’ll survive. If you don’t know how to work with it, you’re flirting with death. There’s no mercy in the ocean.”

In recent years nor’easters and hurricanes have become more common. Superstorm Sandy, for example, took a massive toll on the local marine industry. Many boats were damaged or lost, gear went missing and dock damage forced scores of boats off the water for months. To date, none of the funds allocated by Congress to help commercial fishermen have reached them due to administrative challenges in the state. The one bright spot post-Sandy has been the reappearance of a Fire Island inlet that has provided much needed “flushing” between the bay and the ocean and is improving shellfish habitats.

Although the seas are currently stormy for many Long Island fishermen, there may be some hope on the horizon. The farm-to-table movement is bringing renewed interest to the local catch—a positive development in the opinion of bayman George Rigby of Center Moriches: “[Fishing is] in my blood,” Rigby said. “I like being there and I like doing it. I don’t want to buy fish at Pathmark.”

Tournaments are also doing a good job promoting recreational fishing from Freeport to Montauk. As Jim Hutchinson of the NY Sportsfishing Federation observed, “When I go out to eastern Long Island and see how unspoiled it is, it’s amazing to me that these areas settled over 300 years ago are still wild. I want to see the traditions continue for another 300 years.”