It’s safe to assume that artists, no matter their medium, understand the feeling of professional futility better than most. The financial insecurity and continuous rejection from audiences and critics is enough to weed out all but the ardently committed. And while many people try to make a living in the arts, most eventually give up.

Singer-songwriter Joe Taylor never quit. His nearly 30-year musical journey has taken him from Halifax to playing for change in the subways of New York to the glossy studios of Los Angeles. The guy could easily teach a class on the ups-and-downs of making it as a musician. Well, sit down. School is in session.

Taylor on critics: “No matter how harsh a critic is about my music, I have already destroyed myself 200 times over. I always want to tell them, ‘You should read my reviews of myself. My opinion is way more brutal.’” 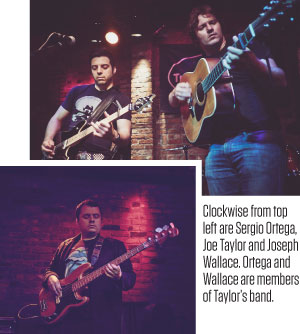 That’s just it: Joe Taylor loves the pain. Given that gem coupled with the sage wisdom above, one would almost be tempted to assume that his music sounds as jaded and forlorn as a Leonard Cohen song on a rainy Sunday. However, on his most recent album, Anything’s Possible, he sounds optimistic and downright peppy. Whether it’s power anthems like “Contagious” and “Possible” or soul ballads like “Walk Away” and “The Sweetest Tune” (the latter was featured on Days of Our Lives), the album could almost be seen as a culmination of his beloved pain so far.

For Taylor, the journey began in Halifax, Canada—an oceanfront city in Nova Scotia with a small town feel. To hear him tell it, he was four-years-old when he realized he was going to play music. Eventually picking up his guitar and heading to Toronto in the mid-90s, he was working as a furniture salesman while honing his music skills when he decided to visit his brother in New York City. There, like so many before him, Taylor fell in love with The City. He commuted back-and-forth, playing gigs at The Knitting Factory and CBGB’s, and eventually made the move permanent in 2001.

“Toronto is a big city, but the difference is the energy,” said Taylor. “In other places it’s all about who you know. In New York it’s more about what you can do. No one’s gonna sugarcoat it there.”

Over the next few years, Taylor played just about any club that would have him. He built a solid enough fan base that he could afford to take some small tours, but never made any real money. Looking to make ends meet, Taylor took to busking in the subways for spare change.

“That was always a great experience, playing in subways, ’cause I could test out new songs. If you’re in Grand Central or Penn Station at rush hour and you can stop someone who’s clearly on a mission to get the hell out of there, or you can trick a couple of them into actually smiling for a few seconds, then you know what you’re doing is good.”

In 2008 he tried out for Music Under New York, a program of the Metropolitan Transportation Authority that schedules paying gigs for musicians in the subway. When he was accepted for program consideration, he got a call from the New York Times—they wanted to tag along on his audition. “I thought it was a joke. But they showed up and drove me over to the audition in a limo. It was pretty surreal.”

At the tryout Taylor said he wasn’t nervous, even though he was set to compete against a range of talents and was “just a guy with a guitar.” He picked an original song, “Around the World,” which was unheard of since most people sang covers. Taylor charmed the judges and his music wowed. He was picked as one of the winners and the resulting Times piece lovingly dubbed him the “Subway Idol,” a name he still embraces.

Building on the attention the Times story earned him, Taylor sojourned to LA to work with a handpicked band of studio vets as well as Grammy-winning producer and engineer Matthew Spindel (Santana, Fleetwood Mac, Tom Petty). Toward the beginning of the sessions, Spindel encouraged Taylor to write more uplifting material as opposed to the standard, forlorn singer-songwriter fare.

“I would think to myself, ‘Hmm, write a positive song. How do I do that?’” said Taylor, laughing and adding, “That’s not to say that I’ll never write another terribly depressing song. Trust me, I’ve got plenty of those left in me.”

According to Taylor, he and the band recorded over 200 songs before choosing 12 for Anything’s Possible. He also made a fan in rock legend Rick Springfield, who asked him to contribute backup vocals to Springfield’s 2012 album, Songs for the End of the World. Since returning from the West Coast, Taylor has continued to tour and rehearse new material in his new Westchester “personal kingdom,” which overlooks the Bronx River.

He knows he’s not exactly a superstar, but he is managing to make a comfortable living doing what he loves. Asked what keeps him going, he mentions family and managers, but also comes back to that ineffable drive that anyone with a dream understands: After all these years, he still loves the pain.

“No one kicks my butt harder than me,” he said. “I don’t know what it is about me, man, but I’ve got something to prove. I don’t care how much pain comes with it. I’m just gonna do it.”