After years of obscurity, moe. finally made the big-time after signing with Sony in 1996. They had the full promotional and financial weight of a major label behind them. And a shot at mainstream success. This meant the potential for shiny, framed records, maybe even Victrola-shaped award statues. Then their debut single came out: A 46-minute song entitled “Meat.” Clearly this was not the typical rock band.

“We’re not out to cut heads and have a vicious corporate takeover of the world,” said guitarist and co-founder Chuck Garvey. “Especially when we first started, it was definitely like we were a little gang and it was us against the world. But I think that’s an essential part of what we’re doing. It’s being true to ourselves and really enjoying what we do.”

The birthplace of this tight-knit cabal was Buffalo as Five Guys Named Moe. The group featured Garvey, bassist Rob Derhak and original drummer Ray Schwartz. Their first gig was a 1989 Halloween party, though word gradually spread. “We really had no fear at all,” Garvey observed. And in the years leading up to their major label dalliance, they hit the highways and “started booking shows and buying vehicles and packing the van and just taking extremely long road trips,” he added.

Guitarist Al Schnier joined full-time a few years later and their current lineup, stable since 1999, includes drummer Vinnie Amico and percussionist Jim Loughlin. Garvey cited friendship, rapport and a sense of humor as moe.’s crucial ingredients. “We find it very important for us to be like a family and get along very well. That’s more important than your ability at your job,” he said. 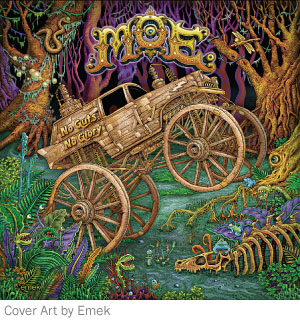 Garvey’s modesty aside, their quarter-century musical formidable live musical chops and rabid fans. “We all realize that [the fans are] an essential part of our longevity and we try to feed that society in as many ways as we can…trying to make all the shows different and writing different setlists every night,” he said. The linchpin of this approach is improvisation and moe. is conscious of both the ensemble and the individual in these journeys. “[Improvisation] is like having a conversation with two friends,” he explained. “You have inside jokes and puns and things that you pass around.Onstage, the leadership role can also be passed around. One person can be leading the charge and then another person can take it up.”

moe. descends on Long Island with a return to the Great South Bay Music Festival as headliner the evening of July 19. Festival mastermind Jim Faith is noticeably enthusiastic. “There’s just a few bands in the jam world that are in their class,” he said. “They just keep getting better.”

Spot the moe. song: In a surprise return to pop culture, the band garnered a mention on Jeopardy! as an $800 clue related to their song “Captain America.”

“The only thing I could think of was that Trebek has uttered our name. We’re so privileged,” Garvey mused.

The Great South Bay Music Festival
This is the top priority of the summer, man. GSB fest will feature dozens of local and national music legends. Popular acts like moe., Taking Back Sunday and B.B. King will be headlining the Blue Point Brew Stage this summer.

In the eight years since it started, the festival has quickly become one of the largest and most anticipated events of Long Island’s summer. The weekend includes an artisan market for shoppers along with creative crafts and family friendly activities. Soak up the rays, and the vibes, at this jamming, upbeat festival staged right on Patchogue’s shores of the Great South Bay.